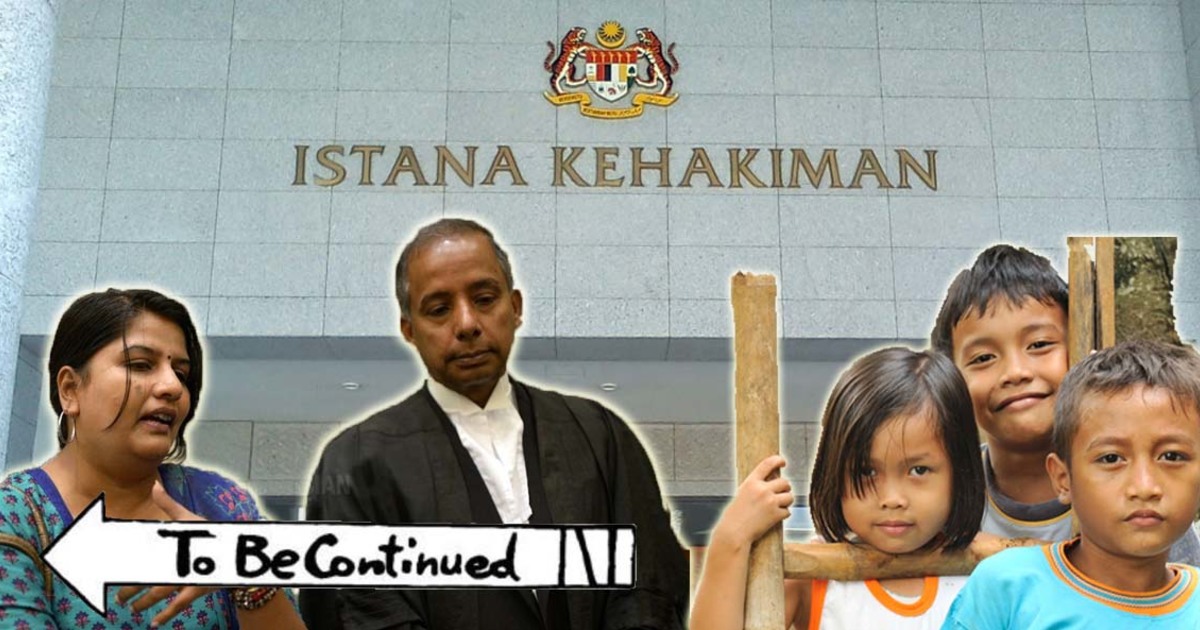 For the past few years, Youtube posts year-end wrap-up video called Youtube Rewind – a sort of recap on what’s been hot and trending on the site in the past year. You can click on the image below to watch this year’s Rewind:

We at Asklegal thought of doing something similar; an Asklegal Rewind, if you will – where we quickly recap 5 unresolved legal issues in Malaysia in the past year. These issues didn’t necessarily crop up in 2017, but they’re still unresolved as of December 31st 2017. They can be either ongoing court cases, loopholes in the law or both.

In addition, we want to say that these issues are definitely NOT unsolvable. In fact, 3 out of 5 of these are actually on their way to getting a legal solution. Without further ado, let’s dive in.

In Malaysia, a parent who has converted to Islam, can convert their child who is a minor to Islam as well. This is provided under article 12 of the Federal Constitution:

(4) For the purposes of Clause (3) the religion of a person under the age of eighteen years shall be decided by his parent or guardian.

What this means is that one of the two parents of a child or children, if they convert to Islam, they can convert one or more of their children without needing to ask for the other parent’s permission or consent. Religious complications aside, one possible legal complication that arises from this is that it creates a gap in the legal system where one parent may have an advantage in a custody battle for the child. The most recent case involves Indira Ghandi’s family, but hers is not the only one.

Earlier this year, in August, a proposed amendment to the Law Reform (Marriage and Divorce) (Amendment) Bill 2017 was not included in the resulting legislation (law). The proposed change was to add section 88A into the Act to make it so that when a parent converted to Islam, the religion of the children would remain the same unless both parents agreed to the conversion of their children. The proposed change never materialized, and so far the problem hasn’t been solved.

For further background and the effect the current situation has on a family, check out this article from our friends at Cilisos.

Very simply, a person is referred to as “stateless” when they are not recognized as being a citizen of any country.

There are various circumstances on how a child can be stateless: they could have been abandoned at birth, some are adopted by cannot find their birth parents, others were born to a foreign mother who did not register their marriage to their Malaysian spouse.

It doesn’t sound immediately life-threatening, but for a stateless child in Malaysia, there are various problems that escalate in severity as they progress through life. They risk not being able to receive any education or healthcare (both of which usually requires a MyKad), and that results in more problems down the road, potentially not getting employed or even having their own children be stateless. It’s a vicious cycle.

The most conventional way to try to challenge the National Registration’s refusal to acknowledge Malaysian-born children as citizens is to go to court. Unsuccessful attempts will result in an uncertain future for these individuals. Now they will have to try to rely on article 15A of the Federal Constitution, where the federal government may register any person under 21 years old as a citizen in special circumstances as it deems fit. This is up to the discretion of the Home Ministry.

Alternatively, they may apply for the status of permanent residence, but just like above, this is subject to the Home Ministry’s discretion. Currently, there is no actual solution for this problem.

We kinda know what stalking is (especially you jealous exes out there), but most of us didn’t know that no laws on stalking exist in Malaysia. So if you’re followed by a creepy dude in the middle of the night when you’re out getting a snack from 7-11, they’re not technically committing a crime as there is no direct law saying what they’re doing is illegal.

There were talks of changing the Penal Code to include stalking as an offence as a short term solution, while a separate anti-stalking law can be looked at in the long term. As of now, though, it is only an offence when there is “touching” involved, which is provided under section 350 in the Penal Code, at the very least:

Whoever intentionally uses force to any person, without that person’s consent, in order to cause the committing of any offence, or intending by the use of such force illegally to cause, or knowing it to be likely that by the use of such force he will illegally cause injury, fear, or annoyance to the person to whom the force is used, is said to use criminal force to that other.

The women, family and community development minister hinted in July that an amendment to the Domestic Violence Act would criminalize the act of stalking, but so far there’s nothing confirmed yet.

Voyeurism might not be a familiar term to many, but “upskirt pictures” probably is. It’s a terrible thing people do, and very, very criminal in many other countries. In Malaysia, there are no laws for hidden cameras that secretly record or take pictures of people. An example is in this incident where a dude was taking upskirt videos of girls at Mid Valley Megamall.

You can read more about this in our in-depth coverage of the subject.

Amazingly, sexual harassment is technically not a crime in Malaysia. It is only really discussed and defined in the context of the workplace, in section 2 of the Employment Act 1955:

―sexual harassment means any unwanted conduct of a sexual nature, whether verbal, non-verbal, visual, gestural or physical, directed at a person which is offensive or humiliating or is a threat to his well-being, arising out of and in the course of his employment;

Plus, even within the workplace, sexual harassment is handled internally, which means the company itself handles the issue. The employer must, according to the Employment Act, inquire into the issue, and they have the discretion to take action against the harasser. Any actions taken might not effect justice on the victim, though. Usually the complaint procedures take a very long time (known to have lasted up to 112 days), and there are no uniformity in handling these matters.

There are upsides: there are recent cases where the courts have allowed victims to sue their harassers, and you can file a police report against the harasser.

This issue has been covered very thoroughly in this article!

Here’s to a better year (legally)

The issues above are not the only unresolved legal issues by any means, but these were pretty big in 2017. Aside from these, there’s also the proposed regulations on cryptocurrency like Bitcoin, the upcoming regulations on hiring maids yourself, and the a possible resolution to the conundrum of the addition of “bin/binti Abdullah” to Muslim children born out of wedlock. These situations of unresolved legal issues are not uncommon, and laws are constantly being changed and, more often than not, improved upon because – like everything else –  laws can go out of date as social norms and technology progresses.

Not everything is bad news, though. We’ve also made some great progress in the legal scene. The amendment to the Bankruptcy Act this year brought numerous positive changes that reflects the current economy more accurately. The Animal Welfare Act 2015 also came into force this year (it wasn’t enforced before), and it provides even more protection for animals on top of the existing Animal Act 1953.

Protection for children has also been ramped up this year with the introduction of the Sexual Offences Against Children Act 2017. The Act covers offences ranging from child pornography to actual physical sexual assault on a child. Our government has also scrapped the mandatory death sentence for drug trafficking offences. This can be seen as an improvement because there are complications with drug mules, and the fact that the death penalty doesn’t really work as a deterrent for these crimes.

On that note, we have lots to look forward to in 2018. Have a happy new year, folks.