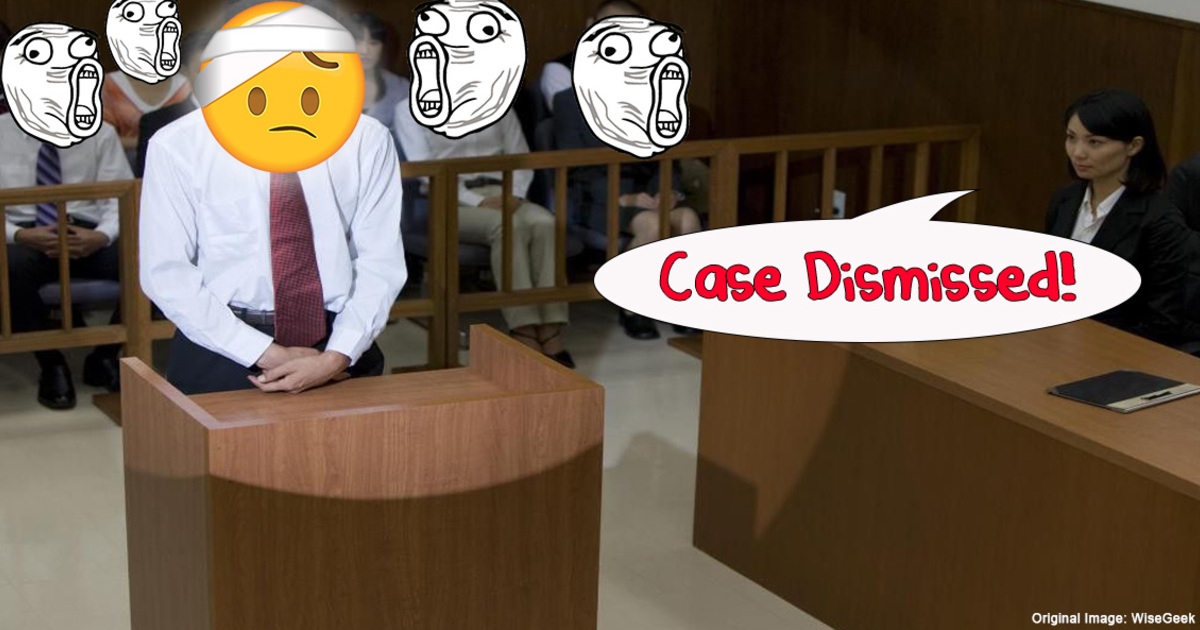 5 ways you could sabotage your own court case

The characters and events in the example below are purely fictional. Any similarity or resemblance to reality is purely coincidental.

Jitendra’s heart drops. He just lost a court case against his futsal buddy Jawagar. Jawagar is a really good futsal player who packs a powerful kick. In fact, his kick is so powerful that during a game, he accidentally broke Jitendra’s leg while performing a tackle.

The medical bills racked up quite high for Jitendra, and hey, Jawagar is the one who broke his leg, so he should pay for the hospital bill right? Jitendra sues, only to find the judge saying sorry to him because he was not entitled to compensation from Jawagar. It’s clearly Jawagar’s fault, so how come Jitendra lost the case?

Turns out the judge actually said that Jitendra didn’t have a right to compensation because he “volunteered” to get injured. What? Who would volunteer to get their leg broken?

The above scenario is an example of one way a person can lose their right to get legal compensation. There are a few scenarios where a person can’t get compensation for an injury in the law, usually where giving the compensation becomes unreasonable, as you’ll see below.

You’ll want to settle most injuries and contract disputes out of court, but if a legal battle is absolutely necessary, you might want to check that you don’t fall into these 5 scenarios if you’re going to sue somebody.

1. You willingly took a risk

To address Jitendra’s story we told above right away, if you knew of a risk and still took it willingly, you may not be able to claim for compensation if you got injured. This principle is known in law as volenti non fit injuria, which translates to “an injury cannot happen to a willing participant”. So if you participate in a futsal match, you are basically saying you willingly risk futsal-related injuries.

This is applied in cases where you had full knowledge of the nature and extent of the risk you’re taking, and you took the risk voluntarily. As an example, a construction worker may fully understand the risks of working on a construction site. He takes the risk of using the machinery, carry heavy loads, but he does not willingly take the risk of a crane carrying stones over his head (why does it have to be over his head in the first place?)

On the other hand, if someone disregards safety precautions and then gets injured, the law also says that they “volunteered” to get injured (ICI v Shatwell [1964]). So if you refused to wear safety equipment and got injured because of that, this rule will apply to you as well.

2. You were doing something illegal

If someone did something illegal, and then wants to claim compensation for getting hurt, the law will not allow it. This principle is called ex turpi causa non oritur actio, which means “an action cannot come from a bad cause”.

It goes against public policy, because criminals would then be able to use the law to protect themselves. Imagine a robber suing you for injuring him, or a scammer telling the police that you refused to give him money. It seems silly because those examples are rather extreme situations, but consider this UK case below. (it’s not binding on Malaysian law, but it illustrates the same legal principle)

In 1991, 18 year old Andrew Pitts sued his dead 16 year old friend, Mark Hunt. They got drunk at a party and Mark was driving them home. It was more than just silly because Mark was not just drunk, he had no license or insurance. They crashed into a car, and Mark died, while Andrew was permanently disabled. Andrew lost the case because he and Mark were doing something illegal together, and thus forfeited the law’s protection.

3. You’re partly at fault as well

Consider a car crash where Driver A was injured because of Driver B’s reckless driving. Driver B will be at fault, but what if Driver A suffered extra injuries because he wasn’t wearing a seatbelt?

This was the UK case of Froom v Butcher [1976], Froom’s compensation from Butcher was reduced by 20% because he didn’t wear a seatbelt and caused himself worse injuries. Froom had to share some of the blame under a rule called “contributory negligence”. As the name of the rule suggests, it’s applied when the injured party was also at fault. You can take it as the law requiring people to take care of their own safety as well.

In Malaysia, this rule is also in Section 12(1) of our Civil Law Act 1956. It’s a bit confusingly phrased, but basically it says that if you got injured and it’s partly your fault, you can still claim compensation, although what you can claim will be reduced.

4. You don’t exercise your right for a long time

If someone hits your car from behind, you wouldn’t wait 6 months before doing something about it. The law will not protect the rights of people who delay unreasonably in taking legal action. This concept also applies to lawsuits, and there are actually rules on how long you can wait before taking action against someone.

[READ MORE - How long is the time limit for me to sue someone?]

To be clear, the law will look at why you were delaying taking action. If you didn’t know about your right, or maybe you were away for National Service, then your legal right will be protected. However, if you took too long for no good reason, you will be barred from getting compensated.

A real incident of this happening was in the local case M. Ratnavale v S. Lourdenadin [1988]. Lourdenadin had an agreement to buy some land from Ratnavale. Problem was Ratnavale sold the land to someone else. Yet, Lourdenadin only filed a lawsuit 14 months after the fact. The court held that Lourdenadin took way too long to protect her right so she could not sue for the piece of land anymore.

5. You didn’t take steps to limit your losses

To use a better example, if Supplier A didn’t get you the goods on time for an important event, you need to do damage control and get Supplier B pronto, not just let your event fail. By doing so, you would then sue Supplier A for the cost of engaging Supplier B.

There was a case in 1969 between Kabatasan Timber Extraction v Chong Foh Shing where Kabatasan was contracted to supply timber to Chong’s sawmill. Instead of delivering the timber to the sawmill, they dumped it about 500 feet away… Chong did “damage control” by buying timber from someone else, and then sued Kabatasan for the price. He won the lawsuit initially, but on appeal the Court wasn’t amused, because Chong could have just paid someone to transport the timber and then sue on that small amount instead.

The law helps those who help themselves

From the above, you’ll note that the scenarios basically say we have the duty to protect ourselves against harm and losses. You might have not known that you can forfeit your legal right in the first place, but you probably don’t have anything to worry about as long as you take care of yourself and don’t do anything illegal.

If you do have a situation you might want to take to court, you should consult a lawyer to check how you can resolve the matter. Every situation is unique and these are just general rules the law takes into account to weed out cases where it would be unfair, or where someone tries to game the legal system.