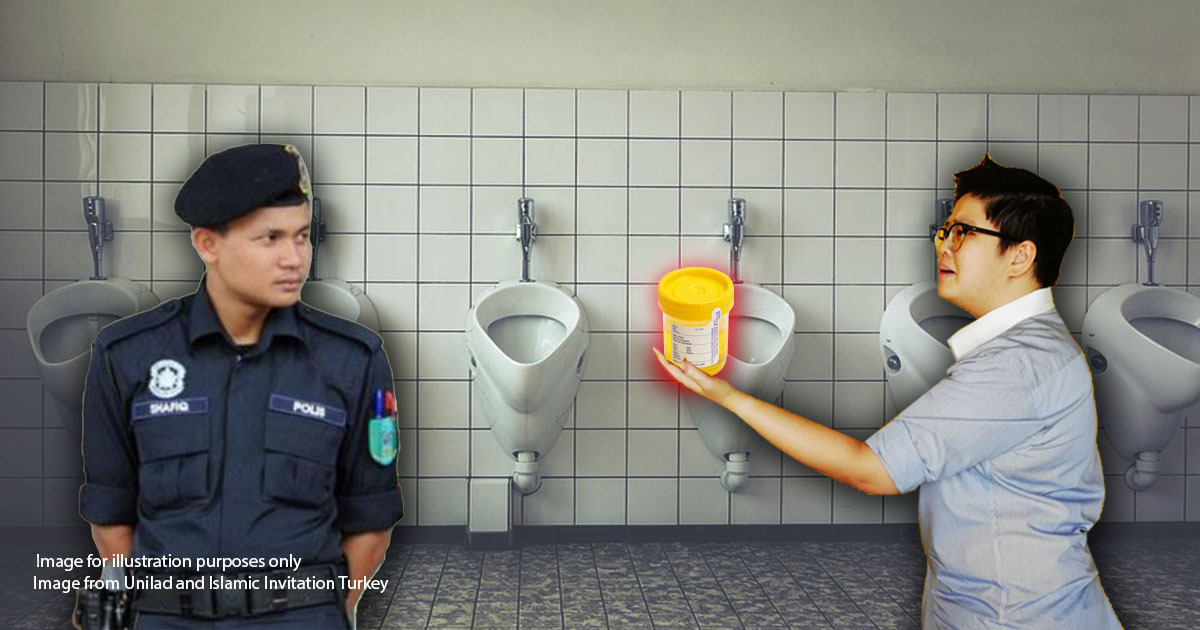 If the PDRM asks you to do a urine test, can you say no?

Imagine you’re driving home one Friday night and you encounter a police roadblock. You’re thinking it’s probably a drunk driving operasi so you’re prepared to wind down the window and answer a question so the officer may smell your breath. Sure enough, the policeman gestures for you to wind the window down…..and hands you a pee test cup.

Another similar scenario may arise when you’re walking down the street one night in a Bob Marley shirt that your friend got you from Jamaica, and a police car pulls up and stops you. After checking your IC and asking you some basic questions, the policeman….asks you to follow him back to the station for a pee test.

Both these scenarios illustrate what a pee test may be used for, which will be covered later in this article. But if this actually happened to you, you may be thinking about a long rant on Facebook about police profiling and abuse of authority.

Another thought that may cross your mind is…. Can you say “no”?

There are two reasons why the police would want you to do a urine test:

There are no set rules on how the PDRM may suspect that you’re under the influence, but it can be said that they must provide a good reason based on your observable condition or behavior.

The powers for the PDRM to conduct these urine tests come from 3 different laws, namely:

These sections basically reiterate the same thing which is, the PDRM can legally ask you to do a urine test, and if you refuse to comply without REASONABLE EXCUSE – you can be found guilty of an offence that may net you with a stay in prison and/or a fine.

In other words, the only to avoid the urine test is if you have a reasonable excuse. Unfortunately, the law has not actually defined what amounts to a reasonable excuse; you could probably tell the police officer that you would do it after contacting your lawyer first.

Technically although the PDRM can legally ask you to do a urine test, they can’t just simply hand you a cup and tell you to take a leak. There are certain procedural rules and requirements to be followed first.

These rules also vary depending on whether they are being used to catch drunk drivers or illegal drug users.

Driving under the influence of alcohol

When it comes to the PDRM testing for alcohol, the first thing that comes to mind wouldn’t be a urine test – it would be a breathalyzer (or referred in the Road Transport Act as a “breathanalyzer”)

Section 45C of the Road Transport Act mentions that a urine test can only be conducted under the following conditions:

FYI, if you are thinking of just driving off and ignoring the police… DON’T.

Not following the instructions of a police officer asking you to stop your car is an offence under Section 26(2) of the Police Act 1967, unless it’s a plainclothes officer without a valid ID.

While you would have to be in a car to get urine tested for alcohol, the PDRM can stop you almost anywhere for a urine drug test. It doesn’t matter if you’re driving, walking in a public place, or vigorously doing the robot in a club.

The laws regarding pee tests for drugs are also not as straightforward as with alcohol. For drugs, the laws and procedures are different depending on what law you get arrested under. There are two laws in question here:

Mind your Pees and Q’s

While the police have every right to get you to undergo a urine test, they also have to follow the procedures laid down according to law. This means that for the most part, they aren’t asking you to pee into a cup for the fun of it – not to mention that you’re at risk of getting into further trouble if you refuse.

But because this situation involves law enforcement, sometimes procedural mistakes may be made – which results in you feeling like your rights have been infringed. In such a situation; try to remember the name of the officer involved, his police ID number, and the facts of the situation you were subjected to. You can then politely inform the officer concerned you would like to contact your lawyer.

When you do communicate with your lawyer, relay the information above to him or her, and they should be able to advise you accordingly.