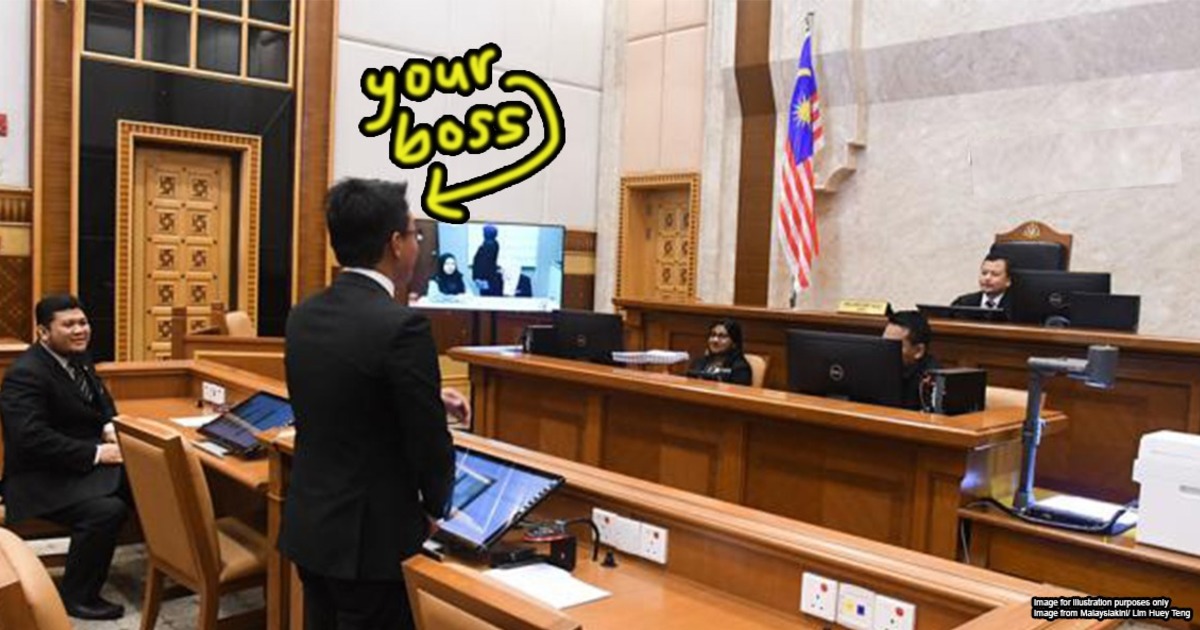 Unfairly fired? Here's how you can take your boss to court in Malaysia

You’re on your way to work. It’s just like any other morning. Once you reach the office, you try to clock in, but you’re getting an error message. Out of nowhere, your boss comes and tells you that you’ve been fired because you’re always late to work. You’re shocked because you know you’ve shown up on time, and you want to explain yourself. But your boss tells you to take your things and leave.

You’ve just been unfairly fired. Instead of accepting defeat, you want to take legal action against your boss. But...where do you even start?

You’ll need to go to the Industrial Court

The Industrial Court—the court that hears all employment matters—works a bit differently compared to ‘normal’ courts.

In normal courts, a case is heard by one or more judges and a decision is made. This decision can be appealed to the higher courts unless of course, you’ve already reached the final court.

Industrial Court decisions—known as awards—can also be appealed, but the process is slightly different,. And unlike normal courts that will either focus on penalizing or compensating someone, the Industrial Court can give you monetary compensation OR get your company to give you your job back. We’ll explain these two points in detail below.

You can either go to the court by yourself and file a case there, or you can go through a lawyer. Make sure you gather whatever evidence you have to show you have a good case. This can be previous promotions to show a good track record, your letter of sudden termination, and so on.

There are five Industrial Courts in Malaysia—one in Kuala Lumpur, Johor, Perak, Penang, Sabah and Sarawak, respectively. You can find the contact number for each one here. One you’re there, they will guide you on which forms you need to file a case. And if you’ve already found a lawyer, they can go with you or on your behalf.

The court will ask you to solve the matter privately first

Here’s an interesting fact: Before the case even starts, the court will first encourage you to solve the matter on your own. While that may seem confusing, there’s a sound reason behind this. The court will only want to hear disputes that really can’t be solved by the parties. They’ll only step in if there’s a need for the law to be applied in the case.

For this reason, the parties will have to go through a negotiation stage. So perhaps, your boss might offer you some cash, or give you your job back, for firing you without a good reason. But let’s say you’re not happy with your boss’ offer and think you deserve better compensation. If the court sees that you and your boss can’t meet halfway, only then will they agree to hear the case.

[READ MORE: 5 important changes to Malaysian employment laws that you need to know]

You either get compensation money, your job back...or nothing at all

Now let’s say your case does get the green light to be heard in the Industrial Court. The court will then apply the relevant law in deciding the case, based on the type of dispute that’s before them. That’s because each type of dispute has different legal tests that the court will use. In the introduction, we gave the example of an unfair dismissal. Besides dismissals, the court can hear trade disputes, non-compliance with a court order, and so on.

Assuming the court has decided the case in your favour, there’ll usually be two options for compensation that can be given to you. Like we mentioned earlier, one can be monetary compensation, and the other is reinstating your former job. But in some cases, the court will decide, based on the facts, that it wouldn’t be suitable for you to get your job back. This can be for several reasons, but the most common one is that the work environment is so hostile, that it would do you no good to go back there and work again. So if this happens, they’ll only offer you the monetary compensation.

And of course, if the court decides that it’s your company who’s in the right, you don’t get any compensation. In fact, you may be asked to pay your company costs instead, to makeup for any legal fees they incurred.

The court’s decision used to be final

As mentioned earlier, the Industrial Court’s decisions used to be final and binding, for the most part.

As you can see, the process of suing your boss in the Industrial Court is rather straightforward. However, do note that like normal court cases, the Industrial Court can take up to 1-2 years to give out the final award. If there are more issues and evidence to be looked at, the court will need more time to go through everything. And if you don’t want to burn bridges and end on a wrong note with your employer, you can opt for an out of court settlement to see if the matter can be resolved privately.