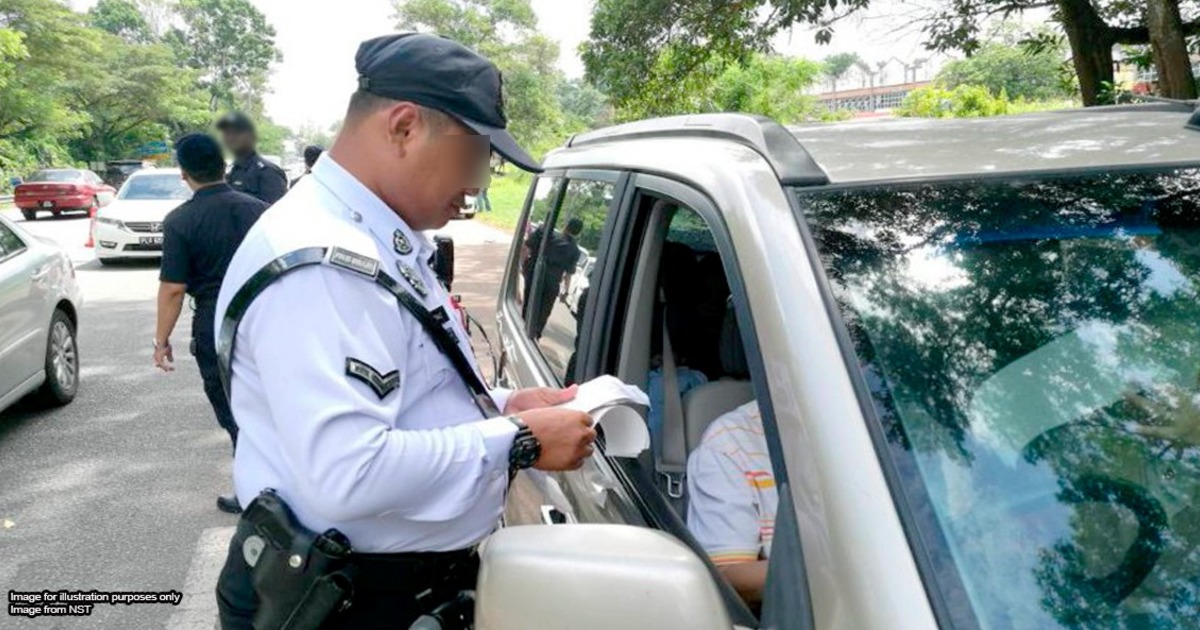 If you drive a car, you would have learnt a few road rules when taking your driving exam. But even if you don’t, almost all of us know that road users need to be mindful of a lot of things to ensure their own safety and that of others on the road. It’s common knowledge that the abang and kakak polis trafik can issue summons for speeding, beating the red light, turning without indicating, and so on.

But Jabatan Pengangkutan Jalan (JPJ) actually has a whole handbook of other traffic rules that can get us saman-ed if we don’t follow them. Some of them are common sense, like the examples we mentioned above. But there are also some minor ones that you might not have heard of, or you didn’t think they were actually laws.

1. Parked with the engine running

Some of us might have innocently done this at some point of our lives, and even our parents might have left us in a car with the engine running for a few minutes. This is actually something that can incur a hefty fine—RM300 to be precise.

It might seem okay to have your car’s engine running while it’s parked. After all, it’s parked. However, there are two issues with this. One, if the brake isn’t pulled up properly, the car can move. Secondly, cars that are idling for too long can lead to carbon monoxide poisoning. This happens when toxic fumes from a car’s exhaust enter the car as it has been idle for some time. So if a child or someone else is left alone in the car, it can turn fatal. There have been a large number of cases of this in the last few years, with the most recent one happening less than 3 months ago.

So the next time, remember to switch your engine off, even if you’re leaving your car for five minutes.

2. Passengers not wearing seatbelts in the rear seat

You would already know that the driver and front seat passenger would need to wear their seatbelts while travelling. But a lesser-known fact is that even those sitting at the back of the car need to belt up. As of 2007, the Road Transport Act 1987 made this mandatory, and those who fail to do this can be fined up to RM300. However, like we said, it’s not widely known, and therefore not many people practice this.

While it’s often assumed that those sitting in the front would be injured the most during an accident, those sitting at the back can also be severely injured if they don’t wear a seatbelt. Recently, there was the case of a 8-year-old who fell over a flyover after being flung out of a car window. This girl was not wearing a seatbelt.

So even if you don’t see a lot of people doing it, it’s best to always wear your seatbelt no matter where you’re sitting. You can keep yourself safe AND avoid getting fined.

[READ MORE: 5 different types of saman that you can get for being a bad driver]

3. Not putting infants in car seats

You might have heard of parents buying car seats for their children fairly recently, but many organizations and associations have been pushing for them to be made mandatory for years now. However, it was only in January 2020 that it became law. To help people get used to this, though, JPJ didn’t issue any summonses for this offence up to June 2020.

In an article by The Star, The Director General of the The Malaysian Institute of Road Safety Research said that car seats can reduce the risk of death by 71% for children. So if you’re a parent to a child under 12—as this is the recommended age—do make sure that you have car seats for them, or you could get stopped by the traffic police.

4. Lights and wipers that don’t work

At some point, you would have seen cars driving around with a light that doesn’t function, or windshield wipers that aren’t doing their job in heavy rain. But while one tiny light malfunctioning and one wiper not working may not seem like a big thing compared to other parts of the car, it still can get you in trouble.

Car lights—specifically your third break light—that don’t function, can set you back by RM150. Meanwhile, wipers that are spoiled can get you fined up to RM100. One way to prevent this is by thoroughly checking your car every now and then and making sure that it’s all working fine.

5. Not displaying your license plate

So this is something a lot of people might already know, but we still thought it’s worth mentioning. We all know why license plates are important—they basically work as a car’s identification. But even if you might have never hidden your whole plate outright, you can also get in trouble if the plate is incomplete. This might happen if you had hit into something and the whole plate came off or it broke, or a number or letter came off it. So again, check your car frequently to ensure everything is as it should be...or you can be fined up to RM300.

There are obviously many more items that are on JPJ’s list of things you can get penalized for, and we may even do a part two of this article to cover more of those. But in the mean time, make sure to be a responsible driver so you don’t end up collecting a whole lot of samans. And if you feel a saman isn’t a big deal and that you can just ignore them...you might want to read the article below:

[READ MORE: Is it really okay if you don't pay your parking saman in Malaysia?]