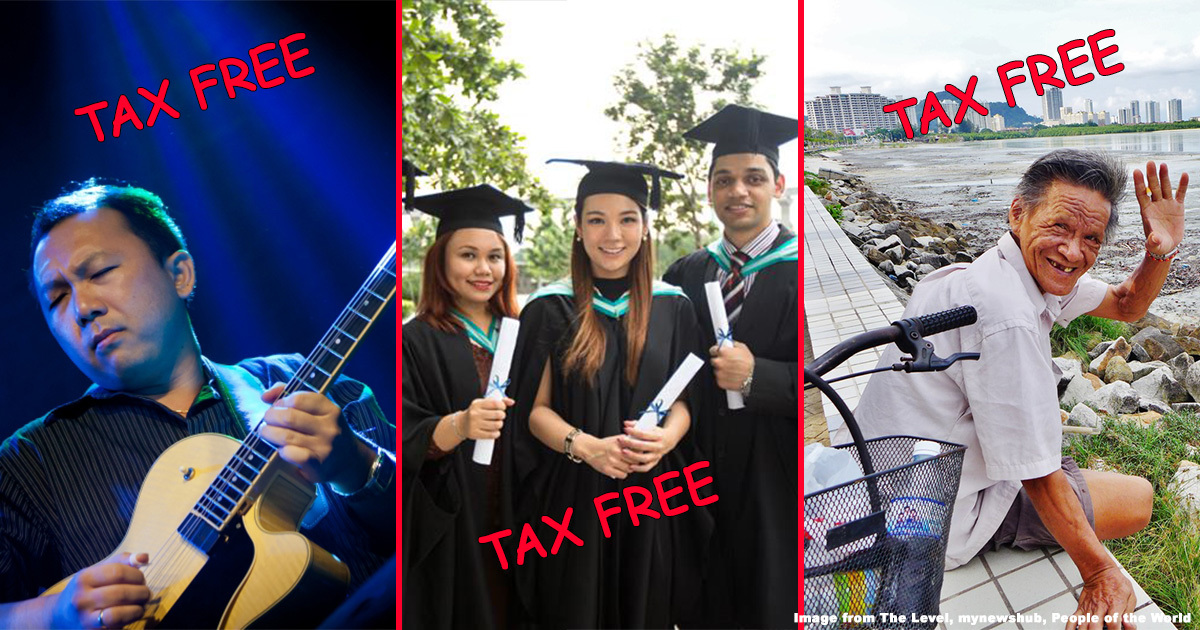 5 sources of income that are tax free in Malaysia

Note: This article was originally written in March 2018.

Most Malaysians are familiar with tax reliefs, which you can file as income that won’t get taxed because you spent them on certain types of expenses. But you might not have known that there are also “tax exemptions” in the law - which are basically types of income that you pay 0% tax on. You can actually find a complete list of tax exemptions in Schedule 6 of the Income Tax Act 1967 (you may have to use Ctrl/Cmd + F to find it).

While some of these exemptions won’t apply to you at all, such as being Malaysian Royalty, and being a local council. Here are 5 tax exempted incomes that can easily apply to you.

Even when a person retires and doesn’t have income from a job anymore, their pension and even gratuity payments are still considered part of their income. It feels really bad if you still have to pay income tax after retiring, but good news - Malaysians don’t pay any tax on that.

Firstly, pensions paid to people after reaching the age of retirement are exempt from tax under Schedule 6, Paragraph 30 of the Income Tax Act 1967. It’ll also apply when the pension is paid due to retirement from ill-health, or if the pension is paid under any other approved fund (even if you have not reached the legal age of retirement). One limitation of this law is for some people have multiple pension payouts, only their highest pension paid will be exempted from tax.

Next up you have money received as a gratuity from your employer when you retire, which is also tax exempt under Paragraph 25 of Schedule 6. This is that one-time payout your parents or maybe you yourself look to get from your employer upon retirement.

But maybe most surprising of all is that severance packages are also exempted from income tax. They’re sometimes known as VSS-s (Voluntary Separation Schemes) and are paid by employers to employees as compensation for losing their job out of nowhere. This paid sum is exempted from tax if it was due to ill-health, or if the amount does not exceed RM10,000 per year of service with the employer.

While you might be disappointed that you can’t benefit from these incomes until retirement, you can still take advantage of the RM6,000 tax relief you get under Section 49 of the Income Tax Act - which covers insurance premiums and your EPF contributions. Think of it as investing RM6,000 for your future self with the bonus of getting a sweet tax exemption.

You might already know this, but under Section 13(1) of the Income Tax Act 1967, your employment benefits are also considered part of your gross income. As stated in the law:

Section 13(1) - Income Tax Act 1967 (in part)
13. (1) Gross income of an employee in respect of gains or profits from an employment includes—
...(b) an amount equal to the value of the use or enjoyment by the employee of any benefit or amenity (not being a benefit or amenity convertible into money) provided for the employee by or on behalf of his employer, excluding...

Normally, you might have to pay tax on those benefits as well, but this is where there are some exceptions. Section 13(1)(b) states that the following are not considered part of your income:

Anything not covered by the above list, or exceeds the limits of the list will be considered part of your income and will be taxable as normal.

If there was any form of encouragement that the law gave to aspiring creative people, it would be this law. A huge amount of the income that comes from royalties is tax exempt in Malaysia. If you’ve not heard of royalties, they are basically the fees others pay to use an original creation of yours.

This tax exemption applies for individuals who are Malaysian citizens, and it’s divided into four main categories:

Any income exceeding the amounts above will be taxable as personal income. If you have that book you’ve been meaning to write for a long time, this law is a pretty good reason to finish writing it!

Even scholarships are considered income, but they’re also exempt from taxes. As stated in Paragraph 24 of Schedule 6 in the Income Tax Act, any money paid as a scholarship or other similar grant or allowance to someone is exempt from income tax.

There’s actually no age requirement for someone to start paying income tax, so if this exemption didn’t exist, students would have to pay tax on scholarships and bursaries that they receive. Take the example of Malaysian Lara Alana who was 3 years old in 2017 when she started earning enough from her reality TV show to pay income taxes.

On top of that, any grants that scientists and professors receive for their research are not taxed either. You could take the tax exemption as a sort of “nod of approval” from the government for new discoveries to be made through the scholarships.

Investments can really pay off if done correctly. A savings account is probably the most basic form of investment we can have, and yes, the interest we earn from our bank accounts is tax-free. Specifically, any interest earned from the following institutions is tax-free.

If you invest in financial instruments like mutual funds and company shares, your dividend payments might also be exempt from tax. The following 4 types will qualify:

Perhaps the most notable form of tax-free dividend from companies is from Real Estate Investment Trusts (REITs) or Property Trust Funds (PTFs). Under Section 61A(1) of the Income Tax Act, these two types of companies do not pay tax as long as they pay out 90% of their profits for the year as dividends to their shareholders - and those shareholders in turn don’t have to declare this income for tax purposes.

Governments commonly tweak tax laws to encourage different types of industries. For example, the Malaysian government was offering tax breaks on hybrid cars for a while before they ended in March 2017. If you’re looking to switch industries or enter new fields of work, you can actually take the current tax laws as an encouragement of which fields to consider entering. As an overall observation from the 5 laws above, people who create original works through creativity and research are quite handsomely rewarded by our current tax system.

If you have a company, a more relevant example to you might be that any profit paid to partners in a limited liability partnership (LLP) is tax exempt as well (Paragraph 12C of Schedule 6, Income Tax Act), making the LLP an attractive business form to use.

[READ MORE - What company type should I use for my business in Malaysia?]