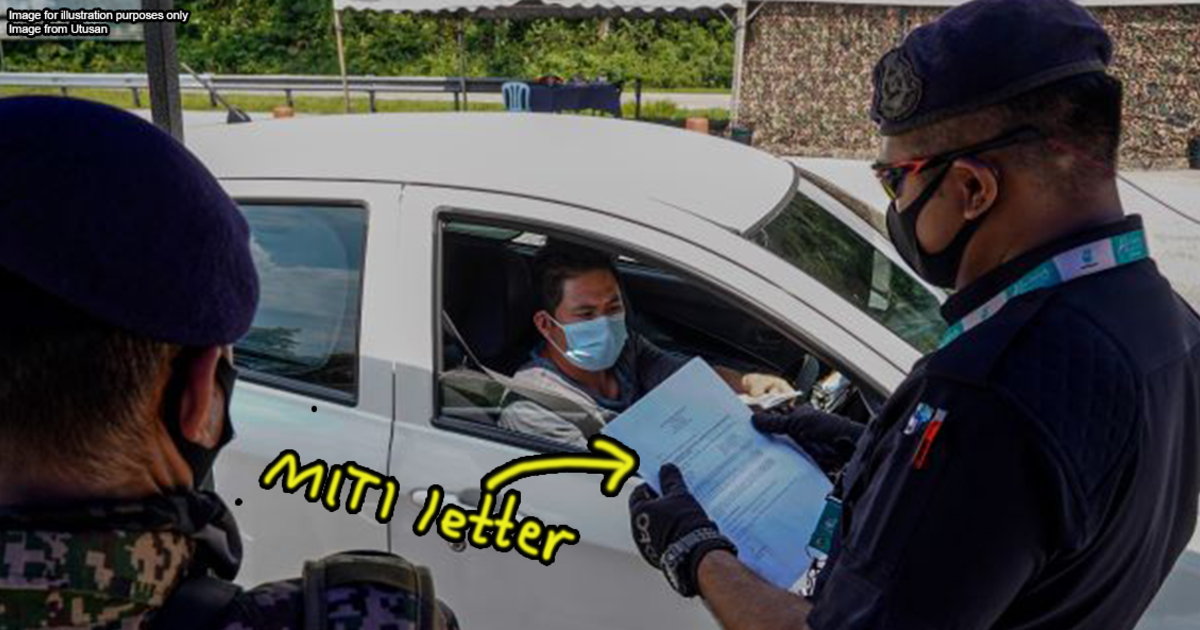 Unless you were disconnected from the rest of the world for the last few days, you would already know that Malaysia is now under an FMCO (Full Movement Control Order). This FMCO is is expected to be for the next two weeks, for now.

During this period, most business (except those that are essential) are expected to shut down. Those with the approval from the authorities will be allowed to work, just like during the previous MCOs.

But one recurring issue that’s been cropping up is that of employers who misuse the approval to operate as usual. We found many complaints by employees that were posted on Twitter, like this one:

So what can you actually do about employers like this?

All letters previously issued by MITI are no longer valid

Those who had approval to go in to the office would have had to obtain a letter issued by the Ministry of International Trade and Industry (MITI). These letters would allow them to pass through roadblocks without getting stopped. However, for this present MCO, the government has decided that all letters that were previously issued by MITI will no longer be valid.

Initially, it was decided that employers will need to apply to the respective ministry for their field of work for permission instead of from MITI.  However, the latest update on this is that MITI will still be the one issuing letters, but they will obtain approval from the relevant ministries to see if that particular business is essential or not. They’ve set up a system just for this, known as CIMS 3.0, and this is where employers can apply for work permission

It was also said that the previous MIITI letters would only be valid up to 31sat May. But it was eventually decided that employees would be able to use them up to 3rd June 2021, so that employers will have more time to obtain fresh approval.

Despite this, not all employees in an office are allowed to come in everyday. Only a certain percentage is allowed, and it differs from each industry—you can check the full list here. This means that if your employer got letters for all employees or even forced those without letters to come in, they would be committing an offence. In cases like these, you are allowed to file a complaint against them.

You can complaint to MITI...and a few others

Besides forcing employees to come in without approval letters or having the full workforce in the office, some other offences that are committed by employers include:

...and many more. The point is, these all fall under serious offences that employers can be penalized for during this pandemic.

As you all would know, MITI is the relevant industry for local and international trade. So if there are employers who are misusing the work permit, you can let them know. There are few channels through which you can reach out to them:

2. Report to the Human Resource Ministry

This is the ministry that is involved in the general welfare of employees in Malaysia and they have the power to investigate any issues between employers and employees. If you are dealing with a boss who is endangering your life by forcing you to come into the office, you can reach out to the ministry. And even if you need to take any legal action against your boss later, you can go to the Industrial Court which is under the purview of the Human Resource Ministry. But for any complaints, you can reach out to them on:

3. Report to the police

The first people you would think of going to if someone does something illegal would be the police. You would have read many articles on business owners who have been fined for not following Covid-19 SOPs. So if your boss is not budging and is still breaking the law, the police can help you.

When you file a police report, your details would be on that report. However, you can be considered a whistleblower. A whistleblower is a person who reports any illegal practices followed by a company. The identity of this person would usually be kept a secret and they should be given protection. Under the Whistleblower Protection Act 2010, the identity of a whistleblower cannot be exposed, except in very rare circumstances.

[READ MORE: What type of protection do whistleblowers get in Malaysia?]

Can you report your boss anonymously?

Understandably, some employees may be afraid to report their bosses in fear of losing their jobs or having some other disciplinary action taken against them. Fortunately, there are ways that employees can make their grievances known without getting in trouble—but some of these aren’t official channels, so do exercise your discretion before giving our information.

For example, there are Twitter accounts with a big amount of followers that have offered to compile complaints by employees and pass them on to MITI. One of them even made a Google Forms just for this.

Instead of filling the forms on MITI or the Human Resource Ministry’s pages which may require your personal details,  you can call them up and let them know that you’d like to keep your identity a secret. There’s no guarantee that they can do so, but there’s no harm in trying—especially if you’re exposing a boss who’s breaking the law.