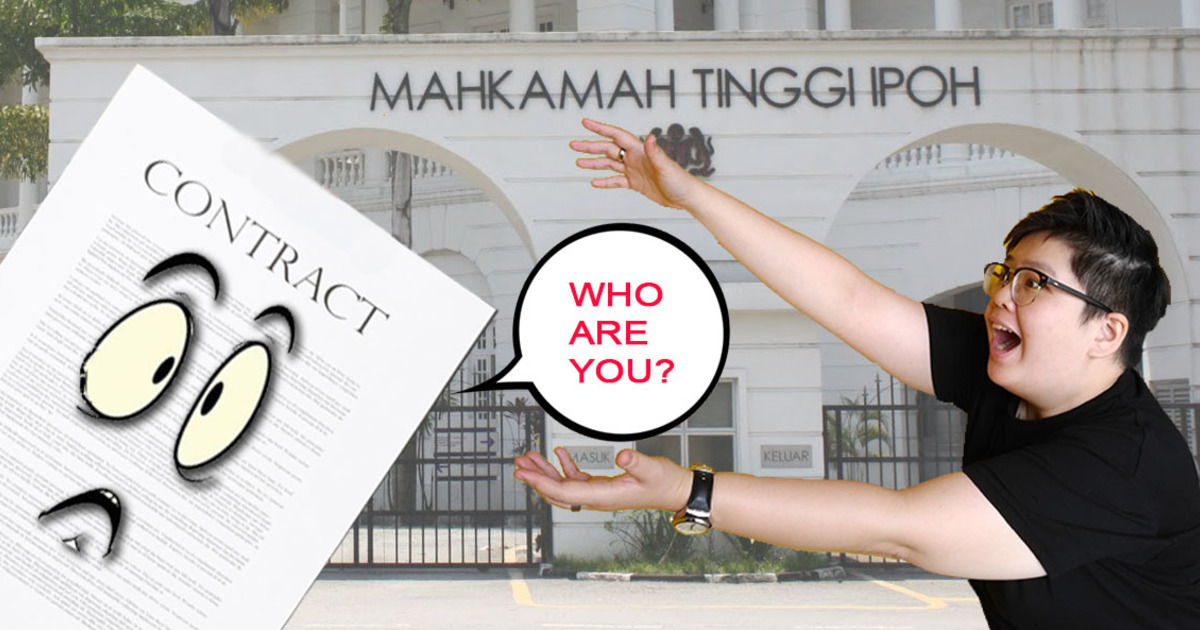 In M'sia, can you sue someone for breaking a contract if your name isn't mentioned in it?

Your friend just gifted you this amazing holiday package that takes you on a week long trip to the Bahamas, complete with a five-star hotel and complimentary spa treatments. Excited, you apply for leave from your company and buy flight tickets to the Bahamas.

As you step foot into the hotel, you notice that it is most definitely not a 5-star accommodation. As the holiday progresses, you feel worse and worse. Not only was your room dirty but the spa treatments were basically a random hotel worker rubbing onion slices all over your body. Feeling cheated, you decided to sue the company that sold the package to your friend only to be told that you can’t sue because you were not part of the contract…?

What does that even mean? If you were enjoying the contract, you were obviously part of it...right?

We don’t mean private in the sense that you can’t show the contract to anyone else but we are referring to the concept of privity of contract.

Ali entered into a contract to buy Abu’s house.

Either Ali or Abu can sue and can be sued on this contract.

Ali entered into a contract to buy Abu’s house for Ali’s daughter.

Either Ali or Abu can be sued on this contract.

Ali’s daughter cannot sue or be sued on this contract.

The easiest real life example we could give you guys is how parents enter into contracts with driving schools to provide driving lessons to their kids. The kids are not a party to the contract but they are the ones benefitting from it. However, if a breach of contract happens through either the kid’s, the school’s, or the parents’ fault, the only parties that can sue or be sued on the contract are the parents and the school.

Likewise in our earlier scenario, you cannot sue on the holiday package because it was made between your friend and the company.

But hang on, where did this whole idea of privity come from?

Way back in ye olde England in 1861, two young kids were about to get married. The overjoyed parents, realising that the millennials of the 19th century had a rough time ahead, entered into a contract where the father of the bride and groom agreed to give the happily married couple some money.

Realising that the baby boomers won again money was unpaid, the groom proceeded to sue the bride’s father’s estate for the money. The courts argued that the son’s action would not succeed because to be able to sue on a contract, consideration for the promise must move from him and he must be a party to the contract. While the contract was made to benefit him and his wife, this was not a sufficient reason to allow him to sue on the contract.

This was the decision in the case of Tweedle v Atkinson and has been one of the cornerstones in contract law for eons. While the UK has moved on to create exemptions for this strict rule, Malaysia adopted it strictly in the case of Kepong Prospecting Ltd v Schimdt.

Before you start frantically rewriting all your contracts to include your uncle, aunt, third wife, neighbour’s dog, neighbourhood cat, etc calm down because…

Given the potential harshness of this strict rule, the courts in Malaysia have come up with several ways to workaround it so let’s deal with them in turn.

The agency principle is basically when there is a principal (something like a big boss) and agent (the underling) relationship. The agent then enters into contracts on behalf of the principal. Technically, this makes the principal a third party to the contract who is then unable to sue or be sued on the contract. An example of common principal-agent relationships can be seen through sales agents that make sales on behalf on the company.

In the case of The Golf Cheque Book Sdn Bhd v Nilai Springs Bhd, the courts said this:

“But it is central to the doctrine of privity of contract that the parties to the contract are contracting on their own behalf and not as the agent of some third party, be that third party a disclosed or an undisclosed principal. Because it is a well established principle that agency is an exception to the privity doctrine.”

Basically, the courts said that the doctrine of privity doesn’t apply when you enter into a contract on someone’s behalf.

In the case of Oriental Bank Bhd v Uniphoenix Corp Bhd,  the courts stated that collateral contracts can be the exception to the privity rule. The reasoning behind this goes as follows – if the promisor to the main contract promises the third party that he will perform his obligations under the main contract, then a collateral contract exists. A failure to perform the contract then becomes a breach which the third party can sue on.

However, in order for the collateral contract to be enforceable, the third party must have provided consideration under the contract as well. You can read more about considerations here.

Some of you may have come across trusts. To explain it briefly, a trust is when someone gives another person property to hold on behalf of a third party. They are commonly used to hold monies for charitable organisations or for parents to benefit their minor children, who are not old enough to contract yet. For example:

Ali has been diagnosed with cancer.

He wants to give his house to his son but he is only 3 years old.

Ali gives his house to Abu to hold on trust for his son.

If there is a trust, then the third party is able to sue the parties to the trust if they breach the trust. However, the intention to create a trust is a paramount consideration for the courts to allow this to circumvent the privity rule.

While these exceptions exist, they are pretty limited and rather confined to specific scenarios. With that being said, now that you guys know that such a thing exists, you can alwayssss

Look for a lawyer

We know that this is the trite phrase that we always throw out but in law, no one shirt fits everyone. While the rules of privity prevent you from directly enforcing the contract, there may be ways to ensure that you are not left without a cure. For example, there is something known as an interveners application where you are allowed to “intervene” in a legal action if you can prove to the court that your rights would be affected by the outcome of the case.

At the end of the day, unless you are incapacitated (for example, you are too young to contract), it might be best to contract as yourself.