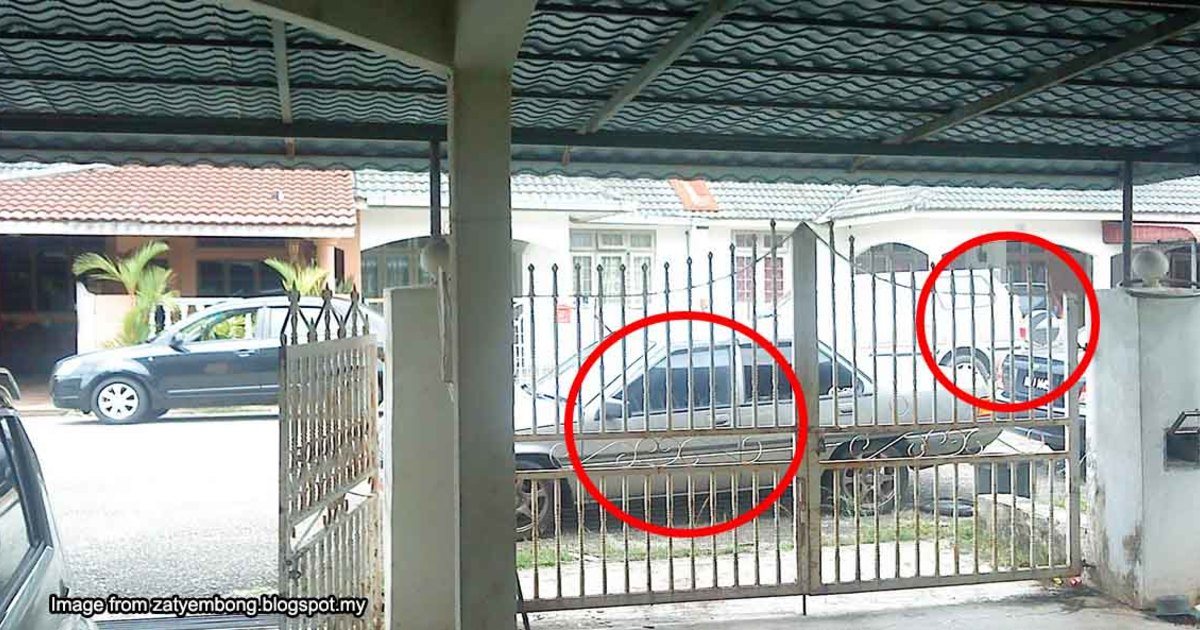 If someone parks in front of your house in Malaysia, what can you do?

It has been a long day at work. You are driving home at a quarter to midnight but you perk up a little as you turn into the road that your house is on. Slowing down, you mutter curses under your breath as you carefully navigate the street that is clogged with cars parked haphazardly on the shoulders. As always, you wonder why these guys can’t just park in their house compounds or in proper parking spaces like any civic conscious person would.

Finally, your house looms ahead and you sit a little straighter...why is there a car parked in front of your house? You inch your car up and realise that the car is unoccupied and the owner didn’t leave a number on the dash.

The worst thing is not being able to park your car in your compound but now, you have to find alternative parking for your car, hike back to your house and try to open your gate without damaging that stranger’s car. You unleash a scream that wakes the neighbours’ dogs and vow to find a solution to these parking issues.

If you have ever been in the situation that is described above or even if you couldn’t access a road because a car was blocking your way, you would definitely be wondering what can you do in such situations (we mean legal solutions, of course)?

First things first, is it an offence to park in that way?

Yes, it most definitely is. The law that we will be looking at today is the Road Transport Act 1987 (RTA 1987). Under section 48(1) of the RTA 1987, any driver that parks in a way that can cause an inconvenience or obstruct other users of the road is liable for an offence and can be punished with a fine of at least RM1,000 and/or at least 1 year in jail.

“If any driver of a motor vehicle causes or permits such motor vehicle to remain at rest on any road in such a position or in such a condition or in such circumstances as to be likely to cause danger, obstruction or undue inconvenience to other users of the road or to traffic, he shall be guilty of an offence and shall on conviction be liable to a fine of not less than one thousand ringgit and not more than five thousand ringgit or to imprisonment for a term of not less than one year or to both.”

So, if you are ever caught in that situation where cars litter the streets of your housing area or if you have ever been in the unfortunate situation where you have been blocked out of your own house by a random car, the force is with you.

[READ MORE: Are you in the wrong if you hit a double parked car in Malaysia?]

The question then becomes how can you get the pesky car(s) out of the way?

The officers can actually tow the cars away

Section 48(2) of the RTA 1987 allows police officers or road transport officers (we are guessing this is where JPJ comes in) or any appropriate authority (probably your local councils) to clamp the car that is parked in an obstructive manner or even tow it away to another location entirely. Section 48(2) states:

“...may clamp the wheel of the motor vehicle or remove or cause to be removed the motor vehicle to any other road or some other location or place as may be stated in a notice and remain there at the risk of the owner.”

This means that a way for you to resolve your problem is by giving the police/JPJ/local authority a call for them to come and remove the illegally parked cars. A netizen called Pepper Lim who blogs here actually had to deal with his neighbour parking right in front of his house every day for 10 months.

What this guy then did was to call MBPJ and lodge a complain with them. MBPJ then sent over their officer to issue a summons for the illegally parked car. This sounds great, right? Because most of us would avoid parking in such a manner after getting our wallets burnt once. However, this guy did not stop and after multiple summons by MBPJ, the total amount went up to RM1,000.

The MBPJ officers then advised Pepper to lodge a police report. Now, while the police did not tow away the car, a visit from the cops was all it took for the misbehaving parker to stop parking in such a terrible manner.

However, it is understandable that most of us would not want to go through the hassle of calling the cops or even risk straining neighbourly relations. With that being said, here are a list of avenues that you can attempt before calling the cops over:

Many of you might be tempted to lash in other more, uh, aggressive manners such as scratching his car or smashing his windows. But since it would be considered criminal damage for you to act in that manner, we would realllyyyyy recommend that you take the high road in cases like these.

Speaking of high roads, what happens if the car is actually parked on your driveway, out of public roads?

You can still make a police report

Someone who deliberately drives onto your property and leaves his car parked there may fall under the Minor Offences Act 1955 (“MOA 1955”) or the Penal Code for trespass. You can still lodge a police report since it involves your private property but whether or not any action would be taken would depend on the police’s discretion (and possibly the severity of the trespass).

Under the MOA 1955, if someone, without a satisfactory excuse, wilfully trespasses into your house, they are guilty under section 22 and can be fined up to RM50.

“Whoever, without satisfactory excuse, wilfully trespasses in or upon any dwelling-house or premises, or upon any land attached thereto, or upon any boat or vessel...not thereby in any of the above cases causing any actual damage, or not causing, in the opinion of the Magistrate, more than nominal damage, shall be liable to a fine not exceeding fifty ringgit.”

We know that fifty bucks is not a lot of money in today’s times but the force of a police report (and the abang polis showing up) would definitely be enough to deter the most hard core terrible parkers out there.

At the end of the day, all the points above mean that…

You don’t have to resort to illegal means

We know that many Malaysians joke (or not) about scratching a lousily parked car or even smashing their windscreen. However, doing those things can actually get you in trouble because despite how good it feels to live by the saying, “an eye for an eye”, why get yourself in trouble when your problems can be easily solved by placing a phone call to your local council?