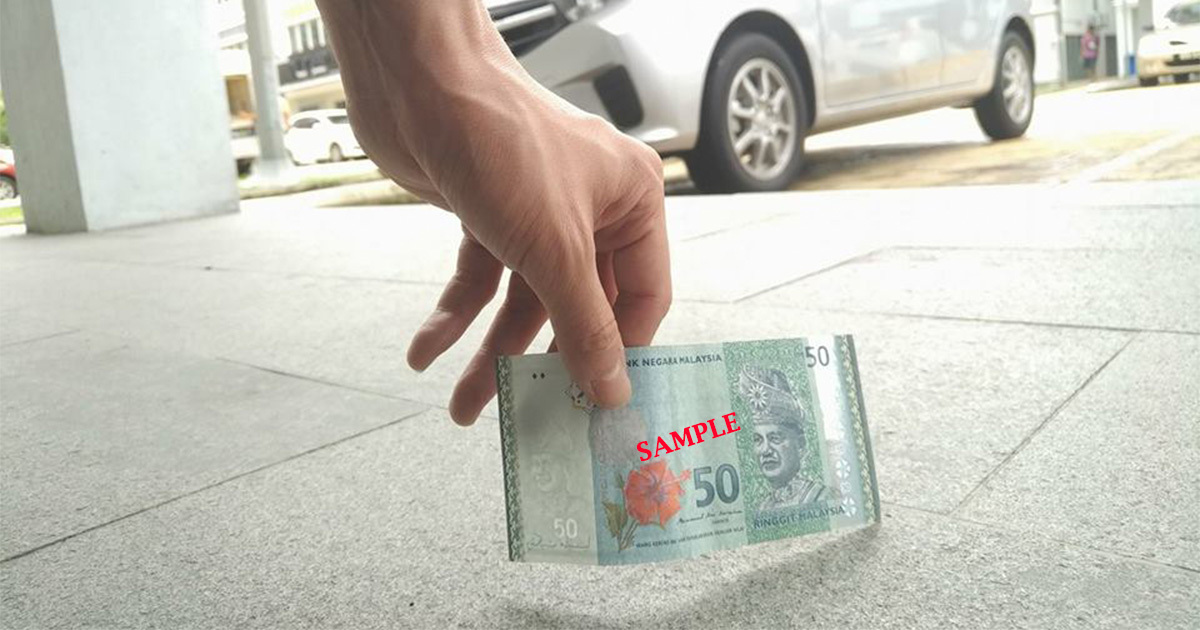 If you find money on the street in Malaysia, can you legally keep it?

Most of us have experienced finding some money while walking down the street. We pick it up, and look around to see if there’s anyone looking for something they’ve dropped. If there’s no one around, we now don’t know whether we should (or can) keep it. Is there a law that covers finding money on the street?

The law in question is called “conversion”, but it has nothing to do with religion! Basically, a “conversion” happens when someone treats something as if it’s theirs although it belongs to someone else.

So relax, it’s perfectly legal if you keep money that belongs to no one - it’s there abandoned on the street!  But if the money was clearly dropped by someone, and you take it instead of returning the money, you might run into legal trouble. The same goes for a wallet.

This is where your confusion might come in - when exactly is it okay and when is it not?

For money, it’s okay when you can’t find the owner

The law of conversion in Malaysia is covered under Section 403 of our Penal Code. Conversion is usually a tort that you can sue the person for, but in more serious cases, it can be a criminal offence as well.

Section 403 of the Penal Code
“Whoever dishonestly misappropriates, or converts to his own use, or causes any other person to dispose of, any property, shall be punished with imprisonment for a term which shall not be less than six months and not more than five years and with whipping and shall also be liable to fine.”

The Section comes with a whole bunch of illustrations and examples to clarify how the law applies to everyday life. And the part we’re interested in for this article is Explanation 2.

“A person who finds property not in the possession of any other person…...he is guilty of the offence above defined, if he appropriates it to his own use, when he knows or has the means of discovering the owner, or before he has used reasonable means to discover and give notice to the owner, and has kept the property a reasonable time to enable the owner to claim it.”

It’s a bit long-winded but basically it means that if you find something that doesn’t belong to you, you have to return it to the owner, or try finding out who the owner is, before you can legally keep it.

As we mentioned in passing earlier, it’s acceptable to keep something lost on the street if it’s impossible to find the owner. When we find a RM50 note, it looks almost the same as every other RM50 note. It doesn’t exactly have a person’s name on it, so we don’t know who exactly it belonged to (so we can keep it). This is also why it’s not okay to keep money that was just dropped by a person - the owner is right there in front of you.

What if you found someone’s wallet instead?

Under Section 403 of the Penal Code, Explanation 2 also has an example under Illustration (f), which says that if you find something belonging to someone else, you must first try to find out who the owner is, before you can use it for yourself. So if you find a valuable ring, someone’s wallet, or even “just a book”, the right thing to do in law is to find out who the owner is.

As an example, let’s say that you found a wallet that doesn’t contain any identification, so you don’t know who’s the owner right away. This is a tricky situation because you’re only required by Section 403 to use “reasonable means” to figure out who the owner is. It still might not okay to keep the wallet, because you can still try to find out who the owner is by asking people or posting on social media about a lost “brown leather wallet with two big scratches on the top” for example. But on the other hand, it doesn’t mean that you have to launch a nationwide campaign to find the owner either. What’s “reasonable” for you to do will vary depending on the situation and there’s no clear cut answer, but in this situation, you can simply turn the wallet in to the police to see if anyone comes to report a missing wallet as well.

You can help society enforce this law

People lose their things time to time, and people find lost items all the time too. Rather than tell ourselves that “it’s the police’s job to enforce the law”, we can also help others out by doing our part to make sure these lost items find their way back to their owners. It could mean telling someone who found a wallet to get it to the authorities, or getting something we picked up to the rightful owner.

It could even be as simple as telling our friends and family that it’s the right thing to do. After all, if we ever lose something precious to us, we’d want others to do the same.