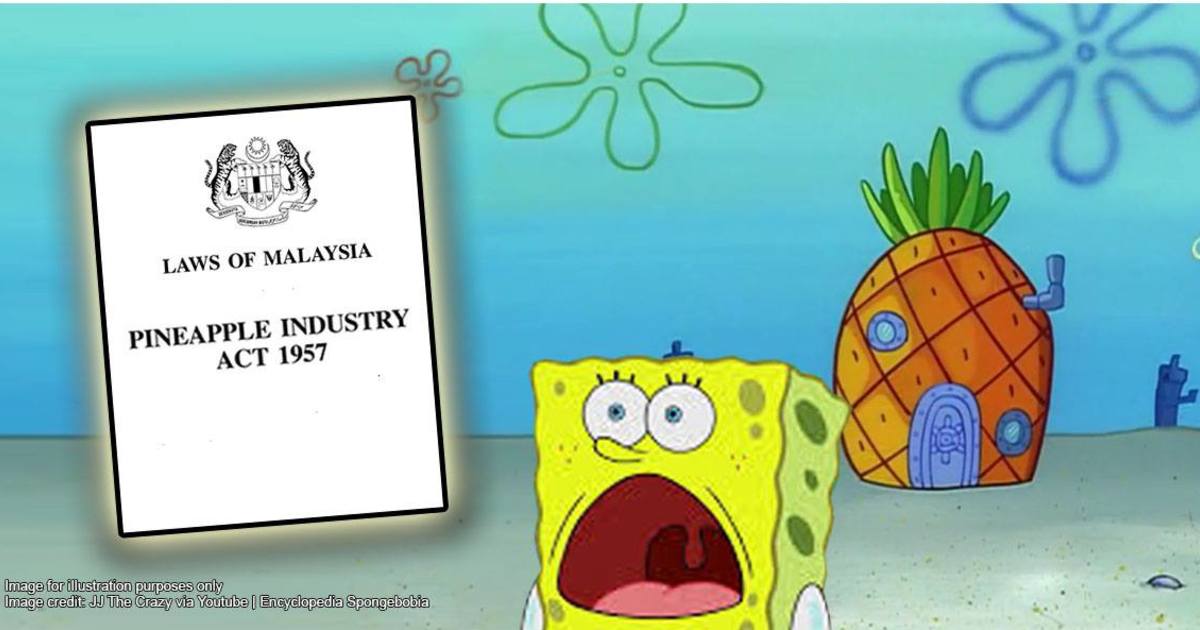 We hear of laws being passed from time to time and many of them, such as the Communications and Multimedia Act 1998 and the Penal Code often make the headlines. But these are only a small fraction of the actual number of laws that have been passed over the years – Parliament has passed over 800 laws – that cover things that range from the mundane to the completely unexpected.

We usually associate laws with punishments and “doing something wrong”, but a lot of the time laws also help to clarify how or when something can be done – kinda like how a shop’s return policy would have certain terms and conditions to prevent someone from returning a shirt 6 months later. So when you consider the scope of activities that go on in an entire country that need to be clarified or controlled, you’re bound to get some super-niche laws like….

Yup, you read that right. In 1957, the government came up with an Act just for pineapples. And no, they didn’t pass this Act to penalize those who think that pineapple and pizza go well together, although they should have.

You may not know this, but pineapples are a great source of income for Malaysia. The Pineapple Industry Act is all about protecting activities related to growing, canning and selling pineapples. Pineapples are so special, that the Act stipulates that people in each layer of the production line must be registered. From the pineapple grower, vendor, canner and exporter, everyone has to have a license from the Malaysian Pineapple Industry Board.

To put into perspective how serious this pineapple business is, let’s take a look at Section 14(2) of the Act, which says:

No person other than a registered can-supplier shall make, re-form or import any cans for the canning of pineapple.

As you can see, even the cans that are used to can the pineapples must come from a registered can- supplier! So if anyone grows, sells, cans or exports pineapples without being registered, they will be committing an offence under Section 14 of the Act and and if convicted, they will have to pay a maximum fine of RM 10,000.

But this Act applies only to those in the pineapple business. So if you have a pineapple tree in your house for your family’s consumption, this won’t apply to you. And you can happily make all the pineapple tarts you want.

Midwives have a been a part of Malaysian culture for the longest time, especially in more rural parts of the country and they are highly respected. But did you know that the Midwives Act 1966 states that midwives need to be registered with the Midwives Board? The passing of the Act was very important, to prevent women from using the help of unskilled midwives, as this can pose great risks to mothers and their babies.

Any person who, not being a midwife registered under this Act, practises midwifery, shall be guilty of an offence and shall be liable on conviction to a fine not exceeding two thousand ringgit or to imprisonment for a period not exceeding one year or to both.

Basically, once you have the relevant qualifications to be midwife and you intend to practice as one, you need to register with the Board. Practising as a midwife without registering means that you could go to jail for a year, be fined a maximum of RM2,000, or both.

However, this Act doesn’t apply to the traditional bidan in rural areas, as they are skilled and have many years of experience. But it does apply to traditional midwives who have obtained a certificate to be a rural health nurse.

For over a hundred years, we’ve had a few different time zones. Some of them were by choice and some of them were not. The British Malayan Mean Time and Singapore Mean Time were used in early 1900s. We even followed the time in Japan when the Japanese were here!

It’s not uncommon for a country to have two timezones. The US, as an example, has nine. But did you know that one point, Malaysia had two different time zones at the same time? From the time Sabah and Sarawak joined the Peninsula to become Malaysia in 1963, up until 1981, Sabah and Sarawak were 30 minutes ahead of the Peninsula.

In 1981, when our then (and current) Prime Minister, Tun Dr. Mahathir took office, he wanted both Peninsula and East Malaysia to follow the same time. This idea was debated in Parliament and it was decided that those living on the Peninsula would have to move their clocks 30 mins ahead to match the time in Sabah and Sarawak. And that is how the Malaysian Standard Time Act 1981 came to be.

But here comes the interesting bit. Section 2(2) of the Act states:

The Yang di-Pertuan Agong may from time to time by notification in the Gazette prescribe such other period in advance of Greenwich mean time to be Malaysian standard time.

This means that technically, our Yang di-Pertuan Agong has the power to “change our time zone”. This doesn’t mean that we could have the same time as the UK, but as an an example, West Malaysia could revert to its time zone prior to the passing of this Act.

A lot of you would have watched The Nun, but you probably didn’t know about this unique group of nuns in Malaysia. They’re called the Good Shepherd Sisters and they’ve been here for a looong time. In 1973, the Good Shepherd Nuns Incorporation) Act was passed to give them the status of a Corporation. This Act allowed for them to have legal status.This means that they can sue and be sued. They can also own property, immovable (such as a house) and movable (eg. car). Normally, religious institutions don’t have such legal status. Any legal dispute will be between two or more people representing their respective institutions. But this is not the case with the Good Shepherd Sisters, who on their own are seen as one legal body.

Most religious institutions don’t have laws to govern them (not ones made by Parliament at least), so that’s what set the Sisters apart. There’s also a law for when the Sister Superior (the Head) is changed.

Section 4 of the Act says:

A notification in the Gazette of the appointment of any person to hold, or act in, the office of Sister Superior of the Good Shepherd Nuns in Malaysia shall be conclusive evidence that such person was duly authorized and appointed.

Basically, the Sisters will have to give a notice to the Gazette to inform them of a change of Head. What’s the Gazette, you ask? It is a Federal or State Government official notification that goes into the government’s public journal. Think of it as a government newspaper that has public and legal announcements in it.

The thought of donating your body for medical research after death may be a daunting one. But as it’s noble thing, some people may consider it, especially those who are terminal. To clarify how donating your body for medical research works, the Human Tissues Act 1974  was passed. The Act basically allows for someone to have legal possession of your body after death. This person, who is legally authorized, will hand over the body to the relevant authorities who will oversee the donation.

Your consent to donating your body needs to be made orally or in writing. Also, make sure that you have 2 witnesses present at the time.

Now you must be wondering if you can change your mind at any point or if someone can object to the whole thing. The answer is yes! And this can be found in Section 2(2) of the Act.

Without prejudice to the foregoing subsection, the person lawfully in possession of the body of a deceased person may authorize the removal of any part from the said body for use for the purposes aforesaid if, having made such reasonable enquiry as may be practicable, he has no reason to believe—
(a) that the deceased had expressed an objection to his body being so dealt with after his death; or
(b) that the surviving spouse or any surviving next-of-kin of the deceased objects to the body being so dealt with.

So if after agreeing to donating your body, you feel like you don’t want to go through with it anymore, you can opt out of it. Or if your family members don’t agree to the donation, they can object. In both instances, the legally authorized person will no longer have possession of your body.

Sometimes age really matters, and this is one instance. Picture this:

Jack and June are married to each other without children, and they own a house. Unfortunately, they both died in a car crash. So...does the house belong to Jack’s next-of-kin, or Jill’s?

Because Jack is older than June, Jack is presumed to have died first. The title to the house will then go to June (or rather, her next of kin).

But why is that? The Presumption of Survivorship Act 1950 is the reason behind this, and the crux of this law can be found in Section 2:

In all cases where two or more persons die in circumstances rendering it uncertain which of them survived the other or others, such deaths shall (subject to any order of the court) for all purposes affecting the title to property be presumed to have occurred in order of seniority and accordingly the younger shall be deemed to have survived the elder.

It states that in a case of two or more people dying in the same incident and no one knows who died first, the assumption is that the older person died first. He would have the title to whatever property that existed at the time. However, the younger one is presumed to have survived the older one(s). This is because younger people are generally presumed to have youth and good health and therefore would have “outlived” the older of the two. And because of this presumption, the younger one will have the title to the property.

For many, many years, women couldn’t vote, legally own anything or sue anyone. Before laws were made or amended to change this, the common position was that the husband was always the legal representative of the wife. For example, a husband used to be responsible if his wife committed a tort (a civil wrong that you can be sued over) or entered into a contract. This included torts and contracts that took place before the marriage.

So if you were a married woman and someone wanted to sue you, they had to sue your husband instead, because he was the one with legal capacity.  In 1957, after the Married Women Act was passed in Malaysia (then Malaya), husbands were no longer liable for their wives’ torts and contracts.

Section 6 of the Act says:

A wife can be sued and now, she also has the legal capacity to sue someone. Her husband is no longer responsible for her, in terms of her legal obligations and responsibilities. And thanks to this Act, a married woman can now legally own property.

[READ MORE: 7 Malaysian laws you probably didn't know existed (that can still get you in trouble)]