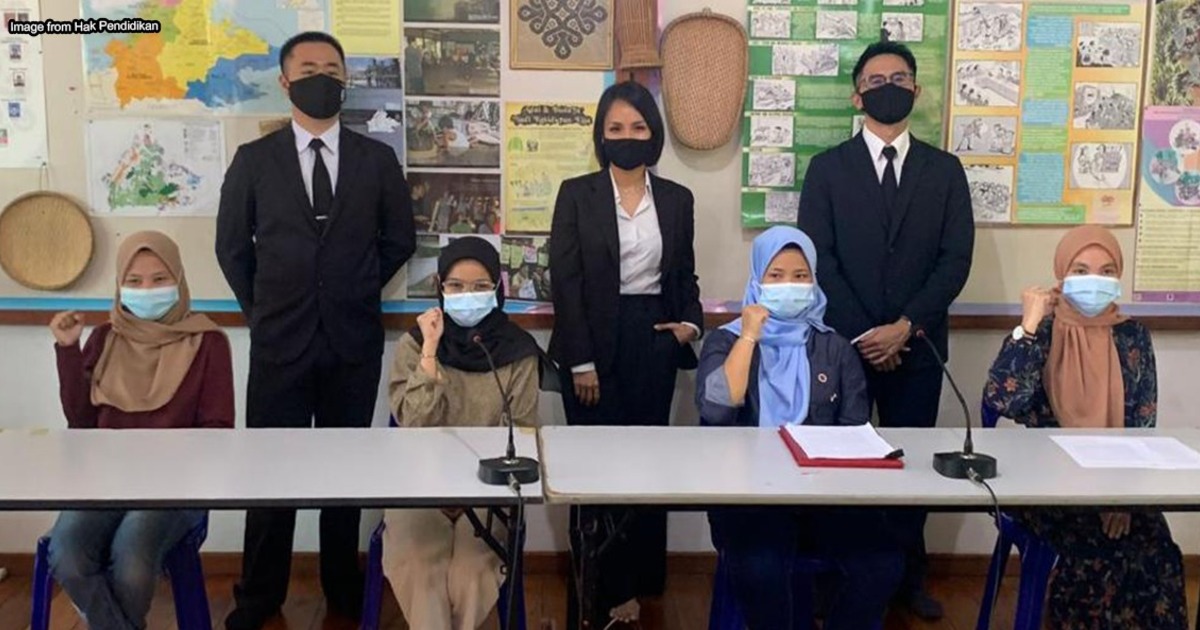 4 Msian girls are suing their teacher for being absent from school. Here's their story

[Update:23/12/2020] Initially, there was just one girl, Siti Nafirah, who was suing her teacher, principal and the Ministry of Education. She filed her lawsuit 2018. But just yesterday, we found out that 3 other students will be suing the same teacher, same principal and the same Ministry. Like Siti Nafirah, these students were also affected by the teacher’s absenteeism. This new lawsuit is separate from Siti Nafirah’s, but they will be suing for the same things that she did. They are all also being represented by the same lawyer.

There is still no update on Siti Nafirah’s case that was last heard in November 2020.

Last year, we wrote an article on a 6-year-old who sued the government of Malaysia. He is one of the youngest people to have sued someone in the country. However, this was done through his father as he was a minor. Now, a 20-year-old from Sabah is said to be the youngest person in Malaysia to sue someone on her own, without being represented by an adult. This student is suing her teacher because he had been absent for the most part of the year. She believes that this in turn, lead to her being unprepared for her Sijil Pelajaran Malaysia, causing her to fail her English paper.

As you’re reading this, you may recall hearing this story quite some time ago. While it made the news a few years back, the case itself is actually only going to be heard in court next month. And it’s a long time coming because...

Siti Nafirah, the student in question, was in Form 4 in 2015. During that time, her English teacher for that year was said to have been absent from class...for 7 months in a row. As mentioned earlier, she failed her English paper and she believes that this had to do with the teacher not showing up to class and coaching them sufficiently. But she didn’t immediately sue him when this happened.

She was said to have first made a complaint to the school regarding the teacher. However, it seems that no action was taken against him. At this point, it’s worth mentioning that Siti Nafirah is suing not just the teacher, but the school’s principal and Minister of Education of Malaysia as well. If you’re wondering why, it turned out that when the Ministry of Education came to investigate the case, the principal allegedly falsified the attendance records of the teacher. So instead of showing that he was absent for seven months, the record said that he was only absent for two. The principal was also said to have made other students speak positively of the teacher, and this made Siti Nafirah’s story hard to believe.

It is only when she realised that the issue was not going to be solved at an internal level, did she decide to take legal action. She is suing them for

By the time all this happened, a few years had lapsed and it was the year 2018.

She wasn’t allowed to sue at first

If you’re wondering why the case has been going on for this long, it’s because all this while, the case did not get the green light to be heard. So if you aren’t aware of how civil proceedings work, here’s a quick guide:

So in other words, not every case that is filed in court will automatically be heard by the judges. There has to be enough substance in a claim for the court to be able to decide on it.

In Siti Nafirah’s case, the parties she was suing petitioned to have her case dismissed. However, in July 2019, the High Court allowed for the claim to go through. The only thing was that they didn’t allow her to sue one of the parties, which is the school itself, as the judge said that they are not considered to be a legal body. However, the teacher and principal will still be sued as individuals. It took a few months for both parties to submit their claims from both sides. And finally, the court set 4th to 8th May 2020 as the hearing dates. But as we all know, Covid-19 was already around then, and the hearing had to be postponed.

The case will finally be heard in court in November 2020

Finally, after a very long wait, this case will be heard in the Kota Kinabalu High Court on 2nd-6th November 2020. This story is yet to have a real conclusion, but once we know the outcome of the case, we’ll write a follow-up article.

On another note, as the case is being heard at the High Court, whatever decision is made can still be appealed to the Court of Appeal, and then again to the Federal Court if either party is dissatisfied with it. And as this case has taken over two years to get to this stage, it could take another few years before we see a final decision.