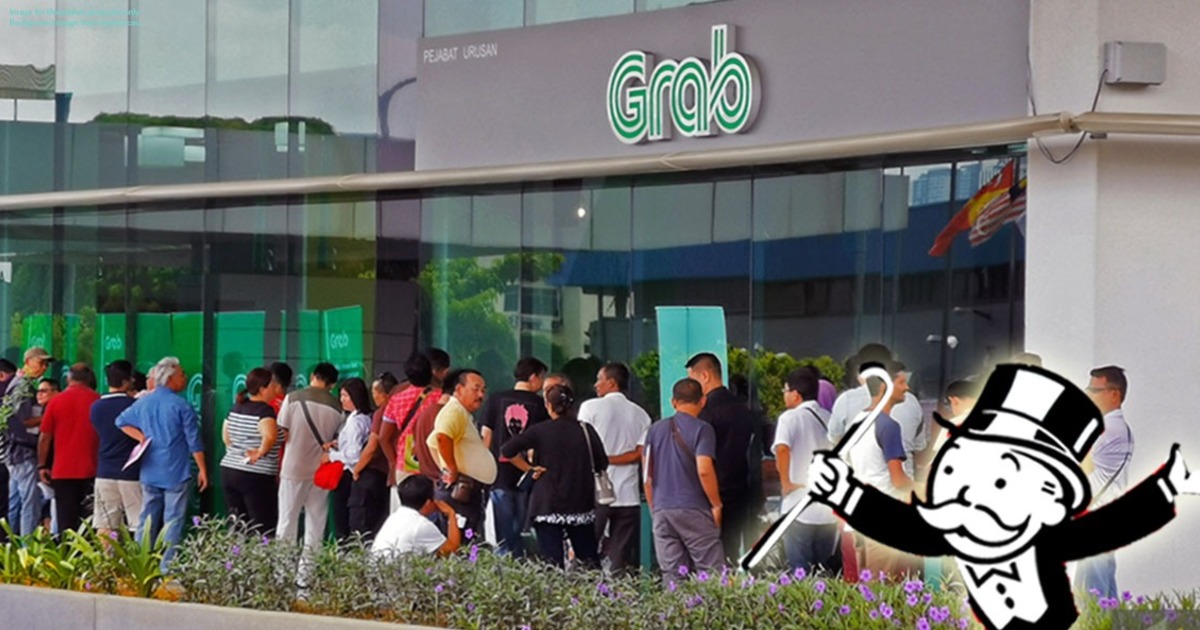 Grab may be fined RM87 million for 'industry monopoly'. Here's what they (allegedly) did

Grab recently came into the spotlight when the Malaysian Competition Commission (MyCC) announced that the company is now an anti-competitor in the e-hailing industry. MyCC also proposed to fine Grab for RM86.8mil, with a daily penalty of RM15,000 per day.

If you’re still in the dark about what anti-competition is, perhaps this scenario can explain: You’ve subscribed to a local TV provider for 10 years now. You realize that each year, the subscription price keeps increasing. You try to look for other options, but there doesn’t seem to be any out there. So you have no choice but to keep paying for it, because it’s the only choice you have.

Well this scenario isn’t made up, and it actually exists. This is known as a market monopoly.

A market monopoly is somewhat similar to the monopoly game we used to play—you basically try to rule everyone, by buying over/owning as many things as you can—which is essentially what companies do when they dominate an entire industry...alone.

But here’s how it really works in real life:

The market monopoly is more than just a game

As we explained earlier, a monopoly is when a company dominates a particular market. The company is said to have great control on the market, which indirectly gives them power to control and alter prices.

But here’s a fact: Monopolies aren’t actually illegal in Malaysia. In fact, we have quite a number in the country. Telekom Malaysia’s high speed broadband and Astro are notable examples.

Now, while monopolies aren’t illegal, they aren’t encouraged in a country either. So, for the monopolies that currently do exist, they are allowed to operate, as long as they don’t abuse their position by dominating in a particular industry.

Our government has plans to bring in more players into different industries, to avoid having a single, dominant company controlling an entire industry alone. In fact, there are laws preventing companies from being solely dominant. Section 10 of the Competition Act 2010 states:

“(1) An enterprise is prohibited from engaging, whether independently or collectively, in any conduct which amounts to an abuse of a dominant position in any market for goods or services...”

Basically, a company is not allowed to abuse its power, by being the only player in a particular industry. The law even gives us examples of a company abusing its dominant position in a market:

“...directly or indirectly imposing unfair purchase or selling price or other unfair trading condition on any supplier or customer;
Limiting or controlling— (i) production; (ii) market outlets or market access; (iii) technical or technological development; or (iv) investment, to the prejudice of consumers;
any predatory behaviour towards competitors...”

TL;DR: A monopoly company that doesn’t misuse its position, and doesn’t put consumers or fellow competitors at a great disadvantage is perfectly legal.

But who gets to decide if a company is abusing power in an industry?

Competition laws exists globally, and Malaysia’s version is stated in the Competition Act 2010. The Act was passed for 2 main reasons:

[READ MORE: Digi and Celcom are planning to merge. How will this affect their customers?]

The Malaysian Competition Commission (MyCC) acts as the regulatory body to protect consumers from being abused by a monopoly. MyCC gets its powers from Section 40 of the Competition Act:

“...the Commission may impose a financial penalty...or...may give any other direction as it deems appropriate.”

The Act basically gives MyCC the authority to decide on how much to fine anti-competitive practices. They also have the power to instruct a monopoly to stop business, take steps to stop the monopoly from operating and give any other direction which is appropriate.

So as you can see, they have a large scope to make decisions under Competition laws. But there’s one thing that keeps MyCC accountable for their actions. Under Section 40(3), they are required to publish the reason(s) as to why they want to impose fines or take action on a certain company.

So in this grappling situation that Grab’s in, MyCC has stated the reason behind their decision. They found that Grab abused its position by imposing restrictive clauses on its drivers—preventing them from providing advertising services to Grab’s competitors. This has now restricted competition among other competitors in the e-hailing market.

But how did that bring a fine amounting RM86.8 million?

MyCC calculates fines based on a guideline

MyCC’s power to impose a financial penalty is limited, and cannot exceed 10% of the company’s global revenue (money made). This is calculated based on the duration of their wrongdoing. It is explained in the Competition Act Guideline as such:

“If the MyCC finds an infringement of the CA 2010, it may impose a financial penalty of up to 10% of the worldwide turnover of the enterprise for the period during which the infringement occurred...”

Basically, if a company violates Competition laws for 5 years, the company’s turnover (income earned) for those 5 years will be calculated. However, if an offending company makes RM5 billion over a certain duration, MyCC can fine them for a maximum of RM500 million...ONLY. But MyCC can’t simply slap that maximum fine just because it wants to.

The penalties are also considered based on dominance of the company:

But a dominant business isn’t just determined by the market share. Other factors include, the business’s actual competitors, potential competitors and economic regulations.

What’s in for Grab?

So just to refresh you on the details, Grab may be fined RM86.8million for violating Anti-Competition laws. They have 30 days from the day the fine was announced, to defend themselves from MyCC’s proposed decision. The RM86.8 million fine imposed, may increase or decrease based on the defence Grab provides to MyCC.

As for now, Grab has stated that they’ve complied fully with the Competition Act. However, a daily penalty of RM15,000 will continue to run until Grab can successfully defend their statement.