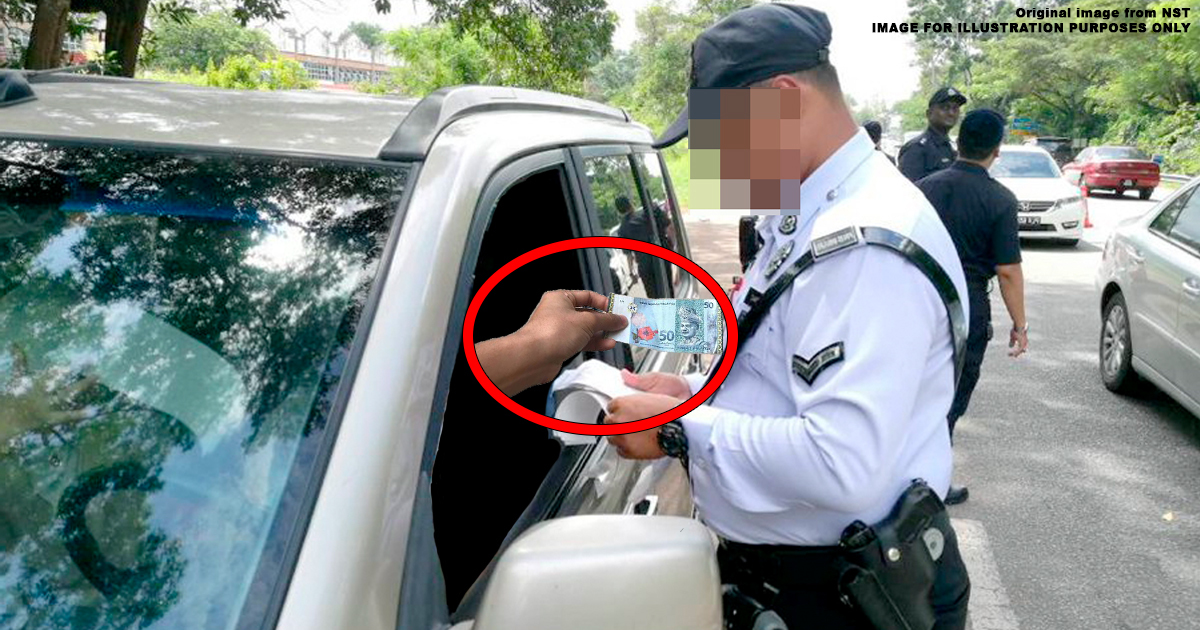 Will you get in trouble if you report a bribe that you paid in Malaysia?

You’re in the car, stopped and staring out at a police officer who’s asking for your ID. Maybe you broke a traffic law and got pulled over, or maybe you were busted for something like making out in the car. Either way, you’re in trouble with the law now…

[READ MORE - So you got caught by the PDRM for making out in public... What now?]

The officer tells you the details of your offence, and right when they’re about to write you a summons, they drop that dreaded line: “how you want to settle?”. Unless this is your first time in Malaysia, you’d recognize that as code for asking for a bribe

You don’t exactly like corrupt authorities, but you’re also worried that the officer might try something that’ll get you in deeper trouble. Stuck between a rock and a hard place, you pay the bribe. You know you’ve broken the law because bribery is a crime, yet you know the right thing to do is to report the misbehaving officer because... Malaysia Baru… right? Now you’re stuck between a harder rock and a harder place - will reporting that you paid a bribe get you in trouble for paying a bribe?

Not reporting a bribe is ALSO a crime

Both accepting (or asking for) a bribe, and offering a bribe are crimes under the Malaysian Anti-Corruption Commission Act 2009 (MACCA):

A “gratification” basically refers to anything valuable, whether it’s goods, a position, or even discounts. And a gratification becomes a bribe when it is given to ask someone to do (or not do) something that will happen, or is supposed to happen. If you take away the technicalities, this basically means that if you give or take a bribe, you’re committing a crime.

You want to report the officer for asking for a bribe in the first place, but… you don’t want to get into even more trouble with the law either. You’re stuck with a legal mess in any case because the MACCA also makes it a crime to not report a case of corruption. Section 25(3) of the MACCA says that any person who is asked for a bribe and does not report the incident can be fined up to RM10,000 and/or be imprisoned for up to 2 years.

So what can you do then? Could you get protection under the Whistleblower Protection Act 2010?

You could be protected as a whistleblower - under certain conditions

The Malaysian Anti-Corruption Commission (MACC) is one of the recognized government authorities that you can whistleblow to, which means that they can give you protection as a whistleblower from legal liabilities and disciplinary action, not to mention your identity is kept a secret as well. It’s a highly criticized law that’s the centre of why Rafizi Ramli got into trouble for exposing the National Feedlot Corporation.

[READ MORE - What type of protection do whistleblowers get in Malaysia?]

Because of some shortcomings, whether or not you qualify for whistleblower protection depends on which of the following scenarios you fall under…

If you were approached by a government officer with a ruse like “how you want to settle?”, and you refuse, then you’re in the clear to make a report any one of 7 enforcement agencies, which includes the MACC. You witnessed a case of corruption, and you’re reporting it - straightforward example.

3. You offered a bribe - you… die properly lah

Needless to say, this is different from the above scenarios because you’re not going to report anyone, you’re actually the mastermind for this incidence of corruption…

It’s worth noting that Section 52 of the MACCA states that you won’t be automatically considered as an accomplice to the corruption just because you were a part of it. So to take an example, if you were threatened or otherwise coerced into giving a bribe, the law does not immediately think you’re guilty of corruption, and gives you the benefit of the doubt - there still needs to be proof that you were a willing participant in the bribery.

The whistleblower law has been proposed for reform

You may have found yourself in a difficult situation with an officer before, choosing to take the safer way out by complying with a request for a bribe (and maybe feeling dirty afterwards). Unfortunately the current law doesn’t allow you to step forward about the incident without getting into a lot of trouble yourself.

Ex-Bar Council President Christopher Leong has argued that it’s better to make the revocation of whistleblower protection optional, because well, it’s better to let one whistleblower go free rather than let a case of corruption go unreported instead. It’s one of those bad laws we’re stuck with for now until it gets reformed. Kepong’s MP Lim Lip Eng has mentioned it as a law he wants to table a motion for, and it’s also in Pakatan Harapan’s manifesto as a law in need of reform under their new government.

If you want to suggest laws for reform, you can write a letter to the Member of Parliament from your constituency with your concerns and requests. They’re elected to best represent your views and protect your interests, so it’s vital that you let them know what you want for this country.