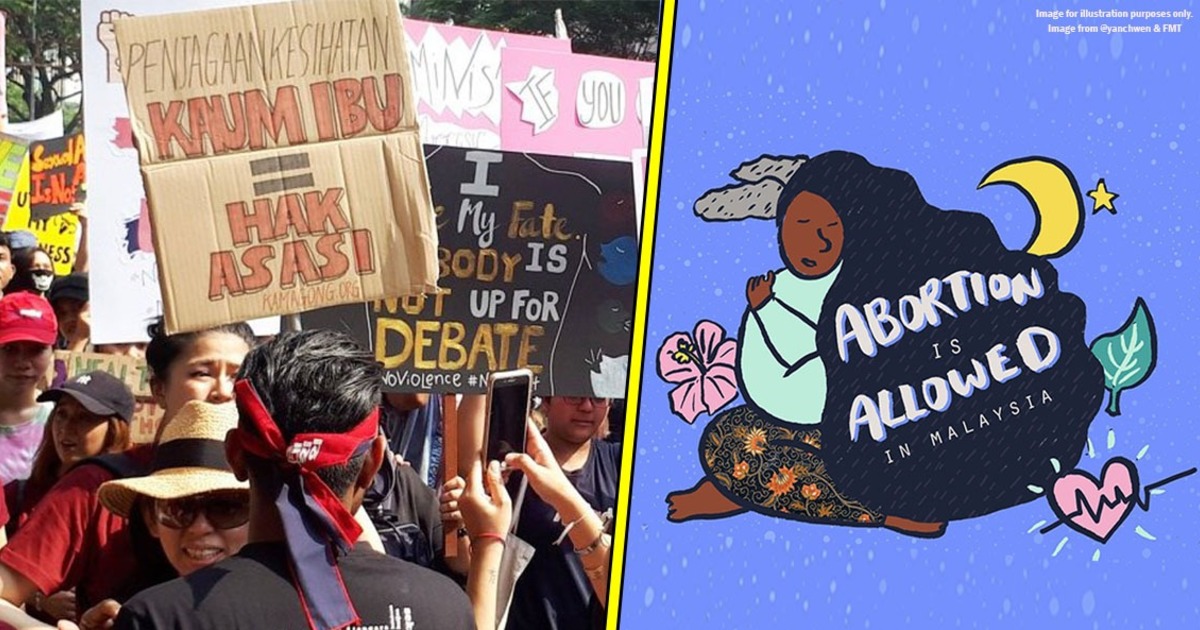 Just recently, the United States has overturned a law – Roe v Wade – which meant that abortions aren’t a protected right anymore there. The news has spread worldwide which might make some of us wonder: Do women have the right to abortion in Malaysia? As it turns out, even some of our medical practitioners aren’t sure what the answer is.

Two years ago, a Malaysian girl’s artwork on legal abortion was making its rounds on social media. Here’s what it looks like if you’ve not come across it on your timeline:

Now, this image became a topic of discussion on whether abortions are actually legal or not in Malaysia. A survey conducted by the Reproductive Rights Advocacy Alliance Malaysia (RRAAM), where 120 medical practitioners were polled, found that only 47% of these practitioners knew about the legalities of abortions.

This evidently shows that not all Malaysians are aware of how our laws work in regard to abortions. So we decided to look at our laws on whether Malaysian women are allowed to have safe, legal abortions or not.

Abortions are legal BUT with conditions

The general rule for having an abortion is—it’s illegal for women, or anyone to do so. Section 312 of the Penal Code states as such:

This Section basically states that anyone who tries to harm the (unborn) child by causing the mother to miscarry, is committing a crime. The offence carries a jail sentence up to 7 years, a fine or both. If the abortion was done before the woman’s 4th month of pregnancy then the jail term is up to 3 years—anything beyond the 4th month (meaning quick with child) the imprisonment is up to 7 years.

Now, here’s where the exception in the law comes to light. If you look at the illustration we showed you right in the beginning, you’d notice a fine print there—which says abortions are legal under 2 conditions.

Section 312 of the Penal Code has an explanation on when the law will work to sentence someone with the offence. The exception in this Section is explained as such:

Might seem a lot to understand, but what it says is that under Section 312, there are two conditions that are considered exceptions for abortions. These are:

Condition 1: If the abortion is done to save the pregnant woman’s life.

If the abortion is done by a doctor who genuinely thinks the pregnant woman’s life is at risk due to her pregnancy, he can terminate the pregnancy. Section 88 of the Penal Code defines good faith (when the doctor can do this):

“Nothing, which is not intended to cause death, is an offence by reason of any harm which it may cause, or be intended by the doer to cause, or be known by the doer to be likely to cause, to any person for whose benefit it is done in good faith, and who has given a consent, whether express or implied, to suffer that harm, or to take the risk of that harm.”

The Act basically states that if a woman gives consent to undergo the abortion, and the Doctor only does this in good faith—to ensure the woman does not lose her life—then the abortion can be carried out.

Here’s another important thing to take note of: Abortions can only be carried out by medical practitioners aka doctors with a license. Anyone who calls themselves “doctor” must be qualified and duly registered under the Medical Act 1971 with qualifications recognized by the Malaysian Medical Council.

[READ MORE: Do you need a medical license to call yourself a “doctor” in Malaysia?]

Condition 2: The abortion is done to protect the mental and physical state of the woman

If the Doctor believes that the pregnancy may harm the pregnant woman’s physical or mental state, the abortion can be carried out legally. The second part of the exception in Section 312 states this:

So if these exceptions can be satisfied, the abortion is not illegal in nature.

Help is available if you need it

As much as help is available for Malaysians, remember the general rule: Abortion is illegal under Malaysian laws. Abortions are only allowed under the exceptions mentioned above in the Penal Code. There are organizations that advocate and aid Malaysian women in the area of reproductive health. One such organization is RRAAM.

The RRRAM was formed by twelve organisations and individuals—some of them include the Women´s Aid Organisation (WAO), the Joint Action Group for Gender Equality (JAG), the Asia Safe Abortion Partnership (ASAP).

RRAAM is available to answer queries and help out if you contact them at their hotline: +6 012-4772551. You can also check out their website for more information on safe abortions in Malaysia.