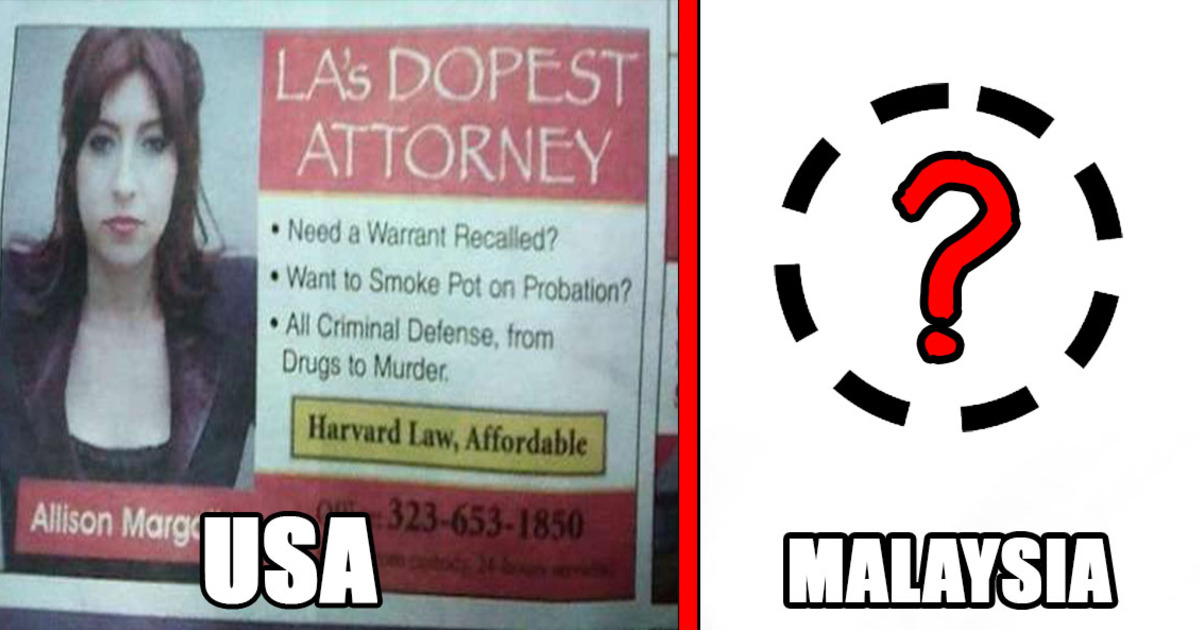 Actually, why are there no lawyer advertisements in Malaysia?

Have you ever wondered why lawyers don’t advertise their services or perhaps, you wondered why they still wear the black robes in court (read about here). Well, it is actually because lawyers have this “secret” conduct of code that they have to adhere to. These laws and codes of ethics bind them in everything they do, from advertising their services to how they should act in court, and even to how they charge their fees.

This article will serve as a brief overview of what kind of rules apply to lawyers. And yes...

There is a special law for lawyers

The particular law that governs how the legal profession works is the Legal Profession Act 1976 (“LPA 1976”). To start it off, let’s look specifically at section 77 of the LPA:

“(1) Without prejudice to any other power to make rules provided under this Act, the Bar Council may, with the approval of the Attorney General make rules for regulating the professional practice, etiquette, conduct and discipline of advocates and solicitors.

(3) Any advocate and solicitor who fails to comply with any rules made under this section may be liable to disciplinary proceedings.”

Section 77 tells us that the LPA empowers the Bar Council to make rules to regulate the conduct of advocates and solicitors (proper term for lawyers) in Malaysia and if any of them breaks the rules, they can be subject to disciplinary proceedings.

With this power, the Bar Council (also known as the BC) has made a whole bunch of rules, and we will concentrate on two for this article:

Without further ado, let’s start off with how public can lawyers be.

Lawyers have strict rules on publicity

The video above is a UK law firm’s advertisement found on Youtube.

The LPPR 2001 basically lays downs rules that tell lawyers how they can publicise their services. An example would be how lawyers can’t put up random flyer ads around town, advertising their mighty advocacy skills. For this article we will look into rule 5, which states that a lawyer cannot claim to be a specialist or expert in any area of law and while they are allowed to be interviewed by the press, they cannot publicise their practice in a way that is contrary to the LPPR rules.

This is best seen in the case of Muhammad Shafee bin Abdullah v Majlis Peguam (Bar Council) where the Bar Council fined a lawyer RM5,000 for the making certain statements, which the lawyer then appealed in court. The statements in question were made in an interview with The Star and they read as follows:

“I can tell you that whenever I am a defence counsel, the AG Chambers always send, without a doubt, their best team against me.

This is true. I am an authority in election law and there are very few of us in this country. I am also one of the world’s experts on extradition and mutual assistance cases.” – Tan Sri Dato’ Sri Dr. Muhammad Shafee Abdullah, Keeping Within The Letter Of The Law, The Star Newspaper, 27 September 2009

While the Federal Court found that the statements made were not in contravention with the LPPR, the fact that this case made it up all the way to the highest court in Malaysia shows how seriously the Bar Council takes their rules.

This leads us to the question of the hour – why do lawyers need so many rules?

The utmost rule is to uphold the dignity of the profession

This is no exaggeration, it’s literally stated in rule 31 of the LPPER 1978:

“Every advocate and solicitor shall at all times uphold the dignity and high standing of his profession.”

This rule can be applied in an extremely general manner and it covers anything from serious issues, to yelling at each other in court and weird stuff such as not using your office to sell clothes...which actually happened.

In Re An Advocate, a lawyer was disciplined for using his office as a showroom to sell ladies’ garments. The direct rule that was breached was rule 44 (which prohibits lawyers from carrying on businesses which are incompatible for an advocate and solicitor) but indirectly, this also breached rule 31.

Aside from this cornerstone rule, the LPPER also lays down rules for how lawyers should act towards you and your case, how they should carry themselves in court, and how they will charge their fees (though this would be covered in depth in a separate article).

How lawyers should treat you, the client

A lawyer’s responsibility is to always accept any case that is offered to him unless he thinks accepting the case would lead to him being embarrassed, lose his professional independence, or a whole bunch of other reasons. These reasons are listed in the LPPER but this writer refuses to list them all down because she took law, not accounting. Instead, let’s illustrate when a lawyer should turn down a case by using...more cases.

In AG v Arthur Lee, the lawyer represented his family’s company and the courts ruled that, as there was a personal relationship between the lawyer and the party in the case, the lawyer should have declined from handling the case because it would bring him embarrassment under Rule 3.

This stems from the fact that lawyers don’t owe their ultimate duty to the clients (gasp!), they actually owe it to the court because above everything else, lawyers are officers of the court. Therefore, if an officer of the court fights on behalf of his family member in court, there will be a risk that the course of justice might be compromised.

Aside from that, the lawyer has a duty to maintain confidentiality. Rule 35 reads:

“(b) An advocate and solicitor shall preserve his client’s confidence and this duty outlasts his employment.”

This means that a lawyer cannot divulge any of the information that you tell him in confidence and this lasts even after he has completed his job with you. It’s the legal equivalent of don’t kiss and tell.

How lawyers should act in court

The case of Dato’ Wong Gek Meng v Pathmanathan Mylavanam tells us that solicitors must not do anything to deceive the court because their ultimate duty is to the courts. If a lawyer tries to conceal documents from the court, this might amount to a contempt of court (Cheah Cheng Hoe v Public Prosecutor).

At the end of the day, it’s really all about how…

Lawyers are almost always in a fiduciary relationship with their clients. A fiduciary relationship basically works in this way – whenever you call upon a lawyer, you would depend on them fully to take responsible actions with regards to your money or assets and to act in accordance with your wishes. Since this places them in a position of great power, the rules are necessary to ensure that all lawyers act in a similar way and are held to similar levels of accountability and responsibility.

[READ MORE: Here’s how you can sue or make a complaint about your lawyer in Malaysia]

As we mentioned above, the few rules that we mentioned here barely start to graze the 70 odd rules that are contained within the LPPER 1978 and LPPR 2001 but we hope that this article serves as a good starting point for you guys and stay tuned for the next article which will talk about how lawyers are disciplined for their misconducts.