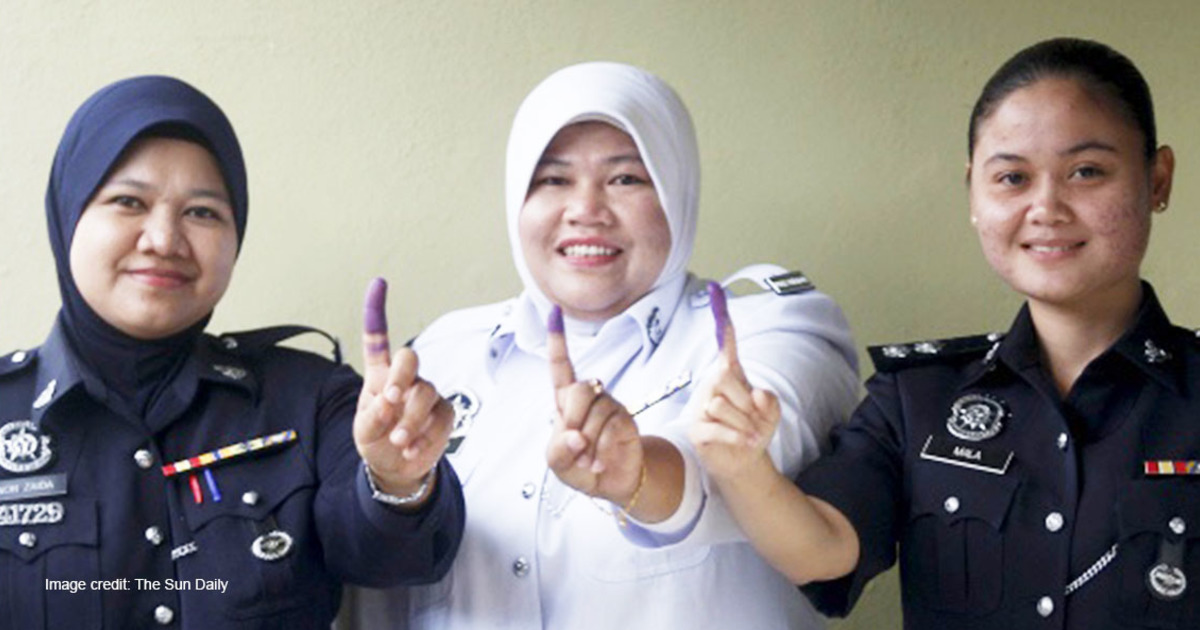 You wake up early in the morning to the singing of birds and golden beams of light. After getting dressed, you put on your best smile of pride and head down to your designated polling station. You’re doing your part in deciding Malaysia’s future, after all, and that is something to be proud of.

You arrive at the polling station and – yay! – the queue isn’t too long. And there’s even a nice man offering cupcakes with your favorite politician’s face on it. You gladly accept one, eager to sink your teeth in to his face (and your vote in his ballot box) when a uniformed officer taps you on the shoulder. He informs you that you’ve just broken the law, and you may not be allowed to vote at all.

This is one of the 5 following actions – which you may be surprised to learn are illegal – could easily do so! Do take note of them and their respective penalties, and be sure to avoid them at the next Malaysia General Election (GE).

We’ve also written a follow-up article on basic Do’s and Don’ts on Election Day itself, so check it out as well!

1. Accepting food and drinks from strangers

PENALTY: Imprisonment for up to 2 years, a fine between RM1,000 and RM5,000, and a suspension of your ability to vote for a period of 5 years.

If you are approached by someone who offers you food, drinks, refreshments, or any other treats before, during, or after the voting process, we strongly advise against accepting this treat. This is especially the case if that person claims that these treats are tokens of gratitude to you for voting.

If the provider does so with reference to voting for a specific candidate, be even more resolute in avoiding them.

Why? The Election Offences Act 1954 identifies accepting these possibly corrupt treats as a part of the illegal act of Treating. This is highlighted specifically in the following section of the act:

The keyword here is “corruptly”, which indicates knowledge of ulterior motives behind the provision and acceptance of such treats. However, because it may be hard to ascertain the motives of those who provide these treats at times, it is best to avoid them altogether. Needless to say, accepting money or financial tokens in this context is unacceptable too!

2. Taking ballot papers out of, or bringing them into polling stations

PENALTY: Imprisonment for up to 2 years or a fine of no more than RM5,000, if not both, and a suspension of your ability to vote for a period of 5 years.

Under no circumstances should you leave the polling station with a ballot paper in hand, regardless of whether it is an extra, used, unused or empty ballot paper.

If you find yourself in possession of two ballot papers, even if due to a mistake or oversight, be sure to return the extra piece immediately to the nearest Election Officer, instead of carrying it out of the station.

The act of taking a ballot paper out of the polling station is illegal, based on the following segment of the Election Offences Act 1954:

Additionally, you should be cautious of printing any replicas of ballot papers or documents that are capable of being used as ballot papers during GE, not to mention avoid bringing them to a polling station. The same section of the act states the following:

Concurrently, when leaving a polling station, be sure to check yourself to see if you have any excess or suspicious pieces of paper either in hand or attached to yourself.

3. Waiting or loitering around polling stations after casting your vote

As soon as you are done voting, be sure to leave your polling station in an orderly and legal manner– for example, while avoiding item number 2 above – and only wait for someone beyond 50 metres from the polling station.

Loitering or waiting within 50 metres of the vicinity of a polling station is considered an election offence, as explained by this section of the Election Offences Act 1954:

(e) within a distance of fifty metres from the limits of any polling station—
(iv) wait or loiter except for the purpose of gaining entry to the polling station to cast his vote...

This translates to say that while you are encouraged to come with your family members and friends to perform your duties as voters, all attempts to rendezvous with them after casting your vote should be made at least 50 metres away from a polling station.

Naturally, loitering around after voting isn’t a good idea either!

4. Wearing items of clothing with your favourite party's logo

This law is one that may be particularly alien to many, but carries a severe penalty nonetheless if breached – which is why you should make it a point to be informed about it.

On the day of the GE, those who visit polling stations – or happen to be present within 50 metres of any polling station – should not do so while wearing items of clothing on which the name of a candidate or the name, emblem or symbol of any political party is printed or imprinted.

This includes almost all categories of clothing items and a range of accessories, as given by the following section of the Election Offences Act 1954:

No person shall on polling day—

(g) within a distance of fifty metres from the limits of any polling station and in a polling station wear, hold or carry any form or type of clothing, head covering, ornament, rosette, water bottle or umbrella on which the name of a candidate or the name, emblem or symbol of any political party is printed or imprinted.

A neutral approach to dressing is probably your best bet when visiting a polling station, as such. Plain clothing, with minimal or no prints is a safe choice, lest you wish to attract suspicion and possible trouble!

5. Not giving your employees sufficient time to perform their duties as voters on polling day

Have you been allocating – or are you planning to allocate – sufficient time for your employees to step away from the office and vote on the day of the GE?

Believe it or not, failure to do so is categorised as an offence against the law. Specifically speaking, it is a violation of the section of the Election Offences Act 1954 that is highlighted below:

Every employer shall, on polling day, allow to every elector in his employ a reasonable period for voting, and no employer shall make any deduction from the pay or other remuneration of any such elector or impose upon or exact from him any penalty by reason of his absence during such period.

Going against this directive may also be regarded as preventing your employee or a qualified voter to perform his duties, which the following section of the same act identifies as an illegality:

(n) obstructs or prevents a voter who is otherwise entitled to vote from voting at an election;

Yes, it is important to keep the engines of your businesses running – but it is also imperative that we avoid unnecessary costs while doing, especially in legal terms.

If something seems wrong, it probably is

Of course, this isn’t an exhaustive list of things you shouldn’t do during voting season, but some measure of common sense can be used as well – such as not taking selfies or having heated political discussions with the person lining up behind you.

It’s also a good idea to keep these laws in mind as they can be overlooked by even the most conscientious of voters during the height of election fever, and to remind your fellow voters as well; because voting is a pivotal affair – and we’re sure that nobody wants to get in unwarranted trouble when attempting to do their part in deciding Malaysia’s future!