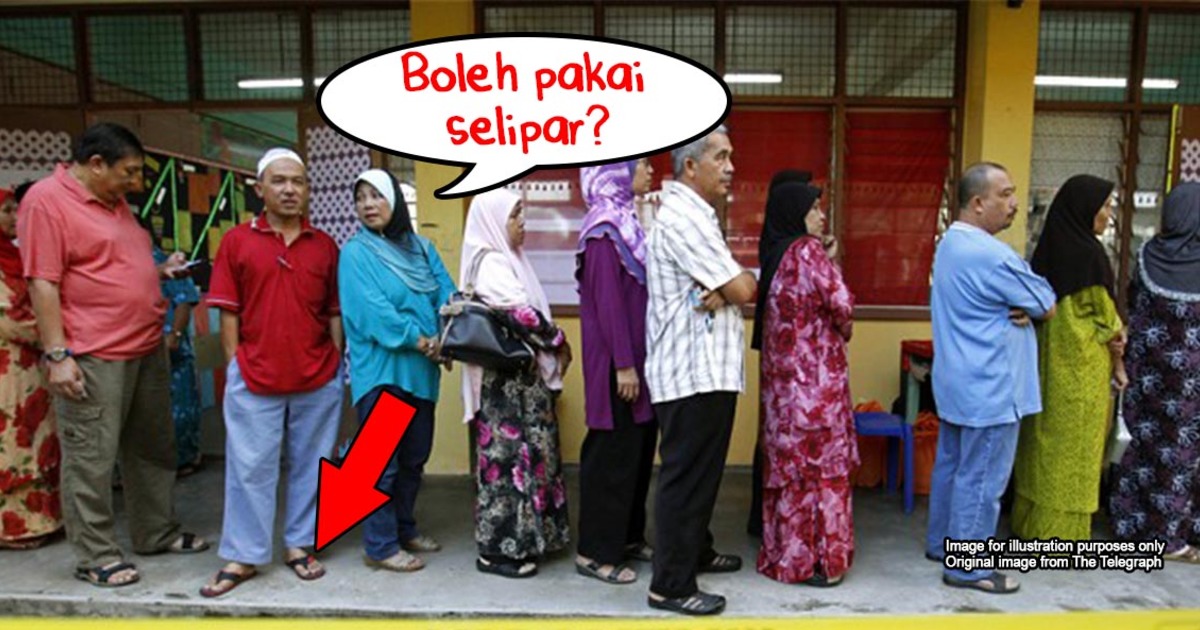 Feel that buzz in the air?

What you're feeling is probably the electrifying excitement of election season, seeing as the voting day for the GE14 is just around the corner.

But whether you’re voting for the first or 14th time, it’s always a good idea to remind yourself of the basic do’s and don’ts as you’re preparing to queue up at your polling station on 9th of May 2018.

Despite some messages being spread around about a dress code for voters on election day, the EC has clarified that this is fake news and no voter will be barred from voting as long as they’re dressed properly – and that should include being able to wear slippers.

"The EC has not and will not prevent a voter from entering a polling station as long as the voter is appropriately dressed." –  Tan Sri Mohd Hashim Abdullah, EC Chairman, as quoted by The Star

However, what WILL get you barred from entering the polling station is wearing clothes that have a candidate's name, a party's symbol or emblem, or any other political elements on them.

No person shall on polling day—
(g) within a distance of fifty metres from the limits of any polling station and in a polling station wear, hold or carry any form or type of clothing, head covering, ornament, rosette, water bottle or umbrella on which the name of a candidate or the name, emblem or symbol of any political party is printed or imprinted.

Yes, you read that right – it also includes accessories such as umbrellas, ornaments, and water bottles. Wearing or carrying any of these within 50 meters of a polling station can lead to being denied entry to vote, a jail sentence up to one year, and/or a fine up to RM5,000.

While we can’t comment too much on fashion choices, it may be advisable to keep your clothing as neutral and decent as possible.

2. Bring your own snacks (if needed)

So, in your most neutral clothes, you head over to the polling station and encounter a group of people who are handing out cold and refreshing drinks as tokens of gratitude for voting for a specific candidate. You accept one to fight off the merciless Malaysian heat – and maybe silently laugh to yourself because there’s no way you’re voting for that person. There are no party logos on the cans, so nothing wrong with that, right?

Well, the joke may be on you.

Section 8 of the Election Offences Act 1954 explains that accepting food, drinks, money or provisions when it is given with the intent of influencing a voter’s vote is regarded as a part of illegal treating.

The keyword here is “corruptly”, which indicates knowledge of ulterior motives behind the provision and acceptance of such treats. However, because it may be hard to ascertain the motives of those who provide these treats at times, it is best to avoid them altogether. If you find the temptation too great and would still like to have the drink nonetheless, keep in mind that it may be the most expensive drink you will ever have. To be precise, it could cost you a fine of RM5000, two years in prison, or both - along with a five-year suspension of your ability to vote.

As a general rule, you should always check your ballot papers to ensure that they aren’t damaged, torn, misprinted, or marked in any way. Also, polling agents will stamp your polling paper before giving it to you, so it’s also a good idea to make sure that the stamp is wholly-within the section of the ballot paper handed to you. If there are any issues with the ballot paper or stamp, it’s within your right as a voter to ask for a new one.

While selecting your preferred candidate, keep your artistic tendencies in check and just place a clear ‘X’ on the box (without going past the borders) next to the candidate’s name. Any other marks, notes, or ambiguities can potentially invalidate your vote as well. In short, don’t conteng on the ballot paper!

Invalidating your vote is one thing, but there’s also some actions that can get you imprisoned, fined, or (arguably) worse – barred from voting during the next election.

The first is by putting random stuff into the ballot box, like fake ballot papers or anything that is not an official ballot paper. You should use only authorised ballot papers that are given to you by election officers when casting your vote, and failure to do so would be regarded as a breach of the Election Offences Act 1954.

Any person who –
(g) puts into any ballot box anything other than the ballot paper which he is authorized by law to put in;

Such a breach can lead to imprisonment for a maximum of two years and/or a maximum fine of RM5000, along with a five-year suspension of your ability to vote. Needless to say, it’s also an offence to to remove anything from the ballot box.

Of course, you could be a rebel and liberate these papers from the polling station anyway, as long as you don't mind losing your ability to vote for five years, with a possible fine of RM5000, and/or a two-year stay in prison. If you find, for any reason, that you have more ballot papers than you need, or discover a paper stuck to your body, approach an election officer immediately and return or remove the said paper.

5. Don’t be a nuisance after voting

Done with voting and waiting for a friend? Feel free to do so - as long as you're at least 50 metres away from the vicinity of any polling station.

Section 26(1)(e)(iv) of the Election Offences Act 1954 explains that no one is allowed to wait or loiter within a distance of 50 meters of any polling station, unless you are waiting to enter the polling station to cast your vote. If you are caught loitering within the vicinity, you may get slapped with a maximum fine of RM5000 or imprisonment for a maximum of one year, if not both.

Worse, don’t try to influence or prevent anyone from voting.

Doing this is not just morally wrong, but legally too. You may find yourself facing up to a year in jail and/or a maximum fine of RM5,000 under Section 26(1) of the Election Offences Act if done within 50 meters of any polling station.

And while we’re pretty sure not many would even think of attempting to do this, don’t organize or participate in a rally!

Regardless of whether it’s peaceful or not; any rally, lecture, or display that involves members of the public will also net you up to a year in prison and/or a RM5,000 fine. This also extends to blasting music or propaganda from loudspeakers or musical instruments, whether in person, from your car, or (funny enough) from animals according to Section 26(1)(b).

While the excitement and anticipation will undoubtedly be high on May 9th, we should remember that our duty as voters also extends to our conduct before and after we’ve cast our votes. In that sense, we should also keep our fellow voters in mind, regardless of their political affiliations and who they support.

Of course, this isn’t an exhaustive list of things you shouldn’t do during voting season, but other than reading the full list in the Election Offences Act or our other article on the subject, some measure of common sense can be used as well – such as not taking selfies or having heated political discussions with the person lining up behind you.

If you’re unsure or have come across any information that seems questionable, you’re advised to check with the Election Commission by calling 03-88927018