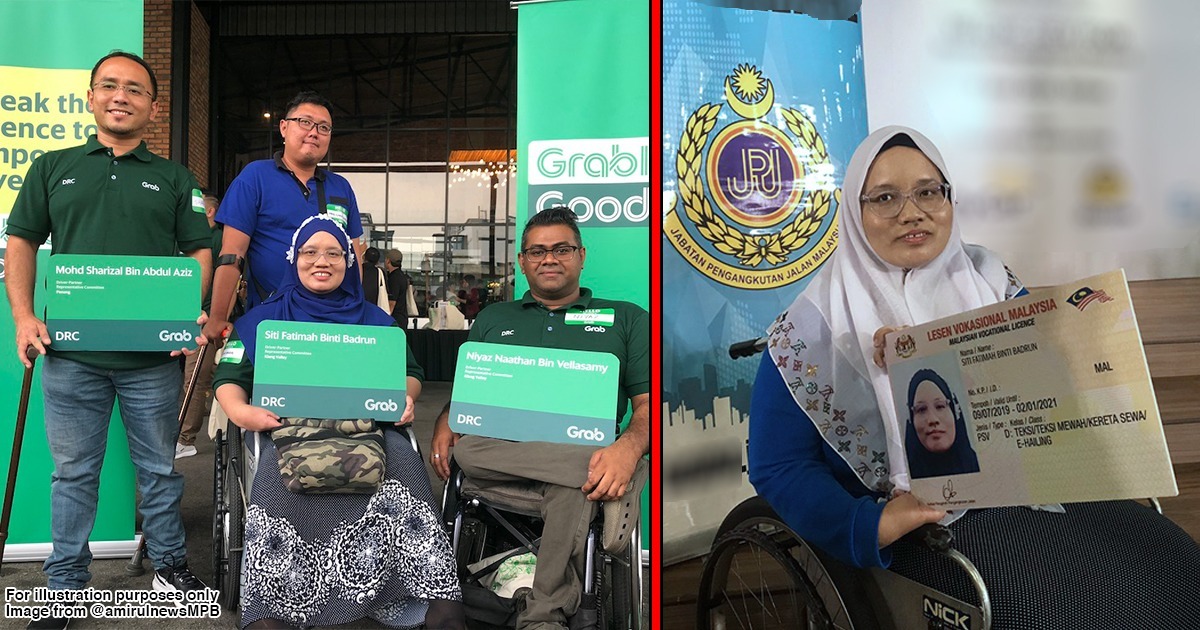 Some of Grab's OKU drivers couldn't get their license despite passing the test. Here's why

Unless you’ve ever gotten into an e-hailing car with an OKU driver before, you may be surprised to learn that there are disabled drivers working with various e-hailing companies in Malaysia. If some of the common reactions relayed to us by some of these drivers are true, then it’s probably safe to say that being driven around by a Person With Disabilities (PWD) driver is something outside our usual realm of experience:

But there are more PWD drivers than you might think. Or at least, that’s what we felt when we attended Grab’s Grab for Good event, to celebrate their partners with disabilities. There, we met a gathering of more than 350 Persons With Disabilities (PWD) who are currently making a living through Grab, either as a driver or a delivery partner.

We managed to speak to two PWDs currently driving with Grab and we found out that, with the introduction of the PSV regulations, they met an unexpected issue – some PWDs who underwent the whole regulation process later found out that they couldn’t collect their PSV license.

If you aren’t familiar with this PSV thing, it’s basically a bunch of laws and regulations introduced by the government to ‘legalize’ the Malaysian e-hailing industry. We’ll get into the details a little later in the article, but let’s first address something else you might have been wondering about….

Is this allowed under the new PSV regulations? If you’re unfamiliar with the PSV issue, we’ve covered this topic many, many times before this. So if you’ve read some of them before, great, have a cookie and skip to the next paragraph. But if you haven’t, here’s a short primer on it:

In many countries (Malaysia included), e-hailing companies have always operated within a grey area of the law. They’re kind of like a taxi, but without the licensing and regulations that taxis are required to have. So, in order to make e-hailing legal in Malaysia, our government made some changes to the Land Public Transport Act to include definitions and regulations for e-hailing vehicles. E-hailing drivers would need to meet these new regulations in order to get a license to operate, known as a Public Service Vehicle (PSV) license. The license essentially recognizes them as commercial drivers, earning money by driving passengers around – essentially similar to the license that taxi drivers have.

Now, the thing about PSV licenses are: PWD drivers originally were NOT allowed to have a commercial driving license. This essentially made PWDs who earned a living from driving e-hailing cars unable to continue working as one. But Transport Minister Anthony Loke decided to be inclusive with the license, stating that they will amend the JPJ rules to allow PWD drivers to be e-hailing drivers.

This was a progressive move as, according to a statement from Grab, Malaysia will be one of the few countries that grants a commercial license to PWDs. But when we spoke to some PWD drivers at the event, we found out that...

Some PWDs were disqualified AFTER passing the test

At Grab for Good, we spoke to Siti Fatimah, who was one of the first e-hailing drivers to get her PSV license. She is wheelchair bound since birth, and drives Grab part-time after work if she still has the energy. When it was announced that PWD drivers were allowed to get a PSV license, she – along with 209 other PWD drivers – became part of the first batch to receive it.

But despite passing the test, she found out that she couldn’t collect her PSV license.

So… what happened here?

If you look at the back of your driving license, you’ll notice all the different type of letters and cars listed at the back. If you drive a car, you’d likely have a class D, which are basically for vehicles below 3.5 tons. Motorcycles are either B, B1 or B2, depending on the size.

PWDs with mobility difficulties would be given an A (motorcyle) or A1 (motorcar) class license, which indicates that they drive cars that have been modified for their needs. So for example, wheel-chair bound drivers would have extra knobs added onto their steering wheel to allow them to control the brakes and acceleration.

Unfortunately, A1 class licenses are not allowed to get a PSV license. This distinction was not made earlier to PWD drivers, which led many, like Siti Fatimah, to go through the whole process only to find out that they weren’t eligible for it in the first place.

Unlike drivers with mobility difficulties, those with hearing or speech difficulties are not categorized under the A1 class as they don’t require modifications to their car in order to drive it.

However, they faced a different set of problems, one of them being inconsistencies during the physical test. There were drivers who passed the fitness test to get their standard driving license, which is the D license. But when they went through the PSV process, they failed the physical test.

Nor’Ain Azizan, a deaf Grab driver, knows a few of her friends who had to drop out because of this.

But she doesn’t want her friends to give up hope, and continually encourages them to go through the process until they receive their license.

The realities of driving for PWDs

There were other issues that have been highlighted in the past, such as a lack of specially-trained instructors and disabled-friendly driving centers, which created some difficulty for PWD drivers attending the mandatory PSV courses and the subsequent exam.

But outside of the difficulties with the test, there are also daily difficulties that PWD drivers have to face with their conditions. Nor’Ain, who is deaf, continually faces issues driving on the road as she couldn’t hear when other drivers honk their horns, especially the ones tailgating her car.

And once, when she got into an accident, the other driver immediately blamed her; saying that it must have been her fault since she was deaf.

Meanwhile, Siti Fatimah sees Grab as a flexible way for her to earn an extra income because, besides her day job, she also has to deal with day-to-day issues of managing her household.

At the time of writing, Siti Fatimah is still waiting for the Ministry of Transport’s response on whether she can get her license in the future; as she has committed the time to complete the process, and even passed the test.

But Siti Fatimah emphasises that PWDs don’t want sympathy or handouts, but rather to just have the means to improve their own situation. She hopes that the licensing issues can be cleared soon for her and other drivers in her situation.

But Grab is doing their best to support PWD drivers (and others!)

Currently, e-hailing PWD drivers are supported by their respective companies. To make the regulation process easier for them, e-hailing companies have agreed to pay for their RM320 certification fees. But some of them have tried to further support their drivers, hoping to improve their experience on the platform. So they aren’t just looking to sponsor them, but rather to create situations and opportunities for PWDs to earn a better living.

Grab is putting in additional effort by trying to get a better insight into their PWD drivers in order to increase their quality of life. To do that, they’ve appointed 16 driver or delivery partners to represent their community under the Driver Representative Committee (DRC). Since the representatives are from the community itself, they can give a better understanding of what their drivers need, and what could make their job easier on the platform.

They’re also looking to help improve communication between deaf drivers and passengers in general. Some passengers don’t expect their driver to be deaf, and so might be unsure on how to communicate with them (such as with giving additional directions). While Grab already provides in-car flip cards (pictured above) to assist with communication, they are also looking into other solutions such as:

They’re also looking to include PWD enterprises in their other services such as GrabPay and GrabFood, We checked opened our Grab app and found a banner highlighting PWD enterprises near us. Currently there are two of them delivering to our office, which are RC Deaf Mission and The Bassment. But this won’t be the only ones, as there will be plans to introduce more differently abled merchants into the system.

And if you don’t know yet, GrabPay can even be used for transactions in real life, just like an e-wallet. They have included this payment option for a few differently abled merchants if you visit their restaurant. So if you’re the type who prefers to be cashless or have a running account in your Grab app, this can be a convenient way to pay, in addition to supporting the PWD merchants.

But it’s not just drivers. They’re also looking to make things better for passengers with disabilities. Grab will be running monthly training sessions for driver-partners on the skills to help passengers with physical disabilities, such as those who are wheelchair bound. Currently, 85 drivers have been trained, but they plan to reach 1000 by the end of 2020.

It’s all part of the process

While the PSV regulations made e-hailing unquestionably legal, it also gave birth to some early teething pains that led to some misunderstandings with procedures and regulations. When new regulations that affects a whole industry – not to mention a very new one – are introduced, unexpected problems are bound to be...well...expected.

Some setbacks, such as drivers dropping out due to not wanting to commit to going through the process of getting certified, can be considered an ‘expected’ problem. But for these PWD drivers, the lack of clarity on license classes and from medical examiners was an unexpected and, for them, a disheartening result.

A few of the drivers we talked to, such as Nor’Ain and Siti Fatimah, enjoyed the fact that e-hailing is an option for them as they now have other avenues to earn an income. Previously, their job options were pretty limited, and they are excited to have one that doesn’t require them to be in an office doing menial work.

But instead of waiting for things to change, some e-hailing companies such as Grab have started their own initiatives to help the PWD communities. By creating opportunities and establishing an infrastructure, they are now giving PWDs a chance to earn a better life on their own.