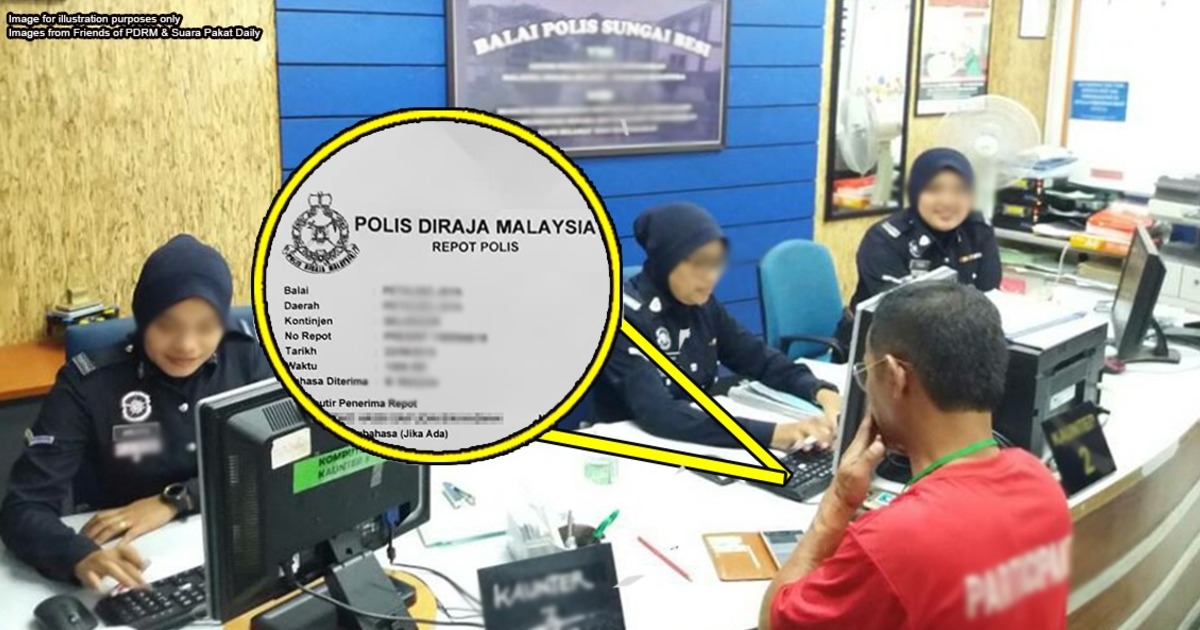 It’s Saturday night and you’re at home with your family watching TV. Then you hear the doorbell ring. You think it’s the GrabFood delivery guy, but much to your surprise and utter confusion, you see two PDRM officers standing outside your door. They tell you that your neighbour has filed a police report against you because her cat is missing, and she believes you have done something to it, because you’re always chasing it away. So now, the two PDRM officers tell you that you must follow them to the balai polis so that they can ask you a few questions.

You have no idea what happened to the cat, but you don’t want to go against their orders, so you just follow them. But you’re terrified because you don’t know what’s going to happen next. And you’re thinking that you might end up in jail.

But here’s the truth: you won’t be jailed just because there’s a police report to your name. There’s a process that has to be followed before someone can be thrown behind bars, so let’s break it down.

Not all reports will be investigated

We don’t want to go into how a case is decided in court, because that’s not what this article is about. But we will tell you what is done after a report is made, and how a decision is made as to whether or not any further action is taken.

Another separate but related point to note is that sadly, there’s nothing you can do about a report like this. Meaning, you can’t ignore the report or ask for it to be taken back. The best thing to do is to cooperate with the police. But don’t worry, if you are ever arrested, you’ll still have a set of rights guaranteed to you, which can be found in the Red Book. But the bottom line would be to just work together with the police until the investigations are complete.

[READ MORE: Don't know your rights with the PDRM? Here's a cheat sheet to download]

Now, let’s backtrack a little to what happens as soon as someone makes a police report against you.

Here’s a fact that you may or may not have known: a police report can be made verbally or in writing. However, the police officer in charge will need to record this statement on paper and have the person made the statement sign it. So either way, this report will be documented.

But investigations don’t start immediately after that. The police will send this documented report over to the Attorney General’s Chambers. In case you weren’t aware of who the Attorney General or AG is, he is basically the “chief of lawyers” of the country. So, the AG (or the lawyers in his chambers/department) will look at the details of report and decide whether the report should be investigated or not.

They will have to look at all the facts in report and see if there’s enough evidence to go ahead and start a criminal case investigation against you. If there is, they will then get the police to ask surrender yourself at the police station. Alternatively, they will ask the court to issue a warrant to arrest you (an authorization to arrest). For more serious crimes, the AG’s Chambers can ask the police to arrest you without a warrant. But all this happens only if the AG’s Chambers are convinced that there’s actually a case against you.

We mentioned above that another outcome of a police report is that there is no action taken on it. So, this happens when the AG or the lawyers under him are sure there is insufficient evidence to prove that you did the crime, or that the claim made by the person itself isn’t strong enough for a criminal investigation to be started. The police report against you will then be marked as ‘No Further Action’ (NFA).

Let’s turn the tables for a minute and assume that you were the one making the police report. If the police told you that no further action can be taken against your report this isn’t the end of the road. You can appeal this decision, and you can read about this in the article below.

[READ MORE: What can you do if the PDRM is not investigating your report?]

Now, let’s say that investigations are started and the case goes to court. There, the judges decide that you are indeed guilty of the crime. If this happens, then it’s understandable that you would have a criminal record, and this record will be stored in a database.

The report cannot be withdrawn

After reading through all this, you might have one question in mind: What if the report against me is taken back?

For starters, a police report cannot be withdrawn. Once a “wrong” is reported, it is the duty of the police to investigate it and for the courts to penalize the person if needed. But let’s say there was a misunderstanding between the person who reported the case and you, and that misunderstanding has been resolved. Even in this instance, withdrawing a report will be almost impossible.

The person, however, can write an application to the Public Prosecutor (criminal lawyer representing the country/government) asking that no action be taken against you. But take note that is just like an appeal, meaning the AG can allow it, or they can reject it and still ask the police to investigate the case.

Again, it’s important to remember the distinction between a criminal record and police records as we mentioned above. So, if someone makes a police report on you but you were found to be innocent, you don’t have to worry even though the records of that report will still exist. This is because it doesn’t have any legal repercussions and you’ll still be able to get a job, buy property, and still live a normal life.