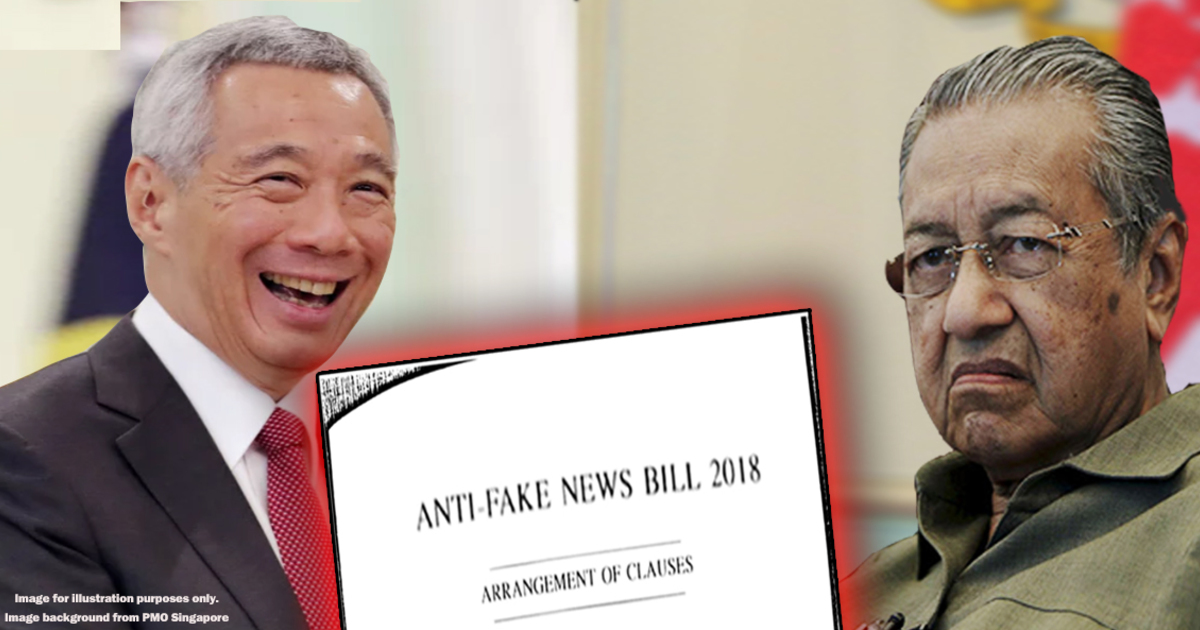 Singapore's Fake News law is 553% longer than Malaysia's. What are the differences?

Recently, Singapore passed the Anti-Fake News law which has garnered quite a bit of global attention...but not in a good way. It has been predicted that this will further lower Singapore’s already low Press Freedom ranking (as mentioned by Cilisos) – Where their current position is 151 out of 180. Malaysia on the other hand has jumped 22 places this year and we’re currently at #123! Yay us!

So, how exactly did we move up and what led to Singapore’s downfall when it came to this? Basically, the Singaporean government introduced their Anti-Fake News Act recently. And if you don’t already know, Malaysia is currently in the talks of repealing (removing) the Act in our country, which was previously enforced by the former Government.

The Malaysian Act came about mainly because the former Prime Minister, Najib Razak stated that the Anti-Fake News Act protects Malaysia from security threats. However, this changed when the new Government took over and we’re currently still trying to repeal it, despite Dewan Negara rejecting the repeal of the Anti-Fake News Act.

Now that you know this, you’d probably be wondering, why is Malaysia running away from the Anti-Fake News Act while Singapore is embracing it?

Malaysia wanted it to prevent disharmony

So, the previous government introduced the Anti-Fake News Act (AFNA) in 2018 to tackle the spreading of fake news among Malaysians –  which then led to a lot of backlash as matters such as press freedom was at stake. There were also arguments on whether or not it was even necessary for the government to enact a new Act while there were already existing Acts such as the Sedition Act and the Communications and Multimedia Act 1998.

[READ MORE: Here's how you may get in trouble with Malaysia's Fake News law]

So, if you’re wondering what exactly this Act defines, fake news is all forms of feature such as visuals, audio recordings or any other form that is capable of suggesting an idea via social media that is wholly or partially untrue.

But the question now is, how do they classify something as unreal?

The definition stated in the Act is somewhat broad, but there are some examples laid out in the Act to help people understand what exactly it is. The Act outlines 8 sample scenarios under Section 4(3), which illustrates how someone can get into trouble with the law. (You can see them here) Also, besides getting in trouble for sharing an untrue news/fact, the Act also states that you can also get in trouble for being the source of the fake news.

The current stand of the Act remains uncertain because of the rejection by Dewan Negara. So, since we’re still 50-50 about it...what’s happening in our neighbours’ side?

As we mentioned earlier, Singapore joined the bandwagon and has now implemented the Protection from Online Falsehoods and Manipulation Act (Pofma) due to several reasons. Here’s what their PM had to say:

If we do not protect ourselves, hostile parties will find a simple matter to turn different groups against one another and cause disorder in our society. – PM Lee Hsien Loong , as quoted by the South China Morning Post.

So, the Singaporean government’s main concern is the fear of disruption of harmony and the law protects the multiracial city from any “exploitation”. However, the country is receiving some backlash due to this, because two things might happen:

With all that being said about Singapore’s new law, we went through both the Acts and found several differences that makes Singapore’s law different from Malaysia’s Anti-Fake News Act...

Some key differences between the two Acts

In other words, they’re same same, but different (Just like our nasi lemak and...then there’s theirs). But apart from the differences in the names of the Acts, there are also a few additions to the Singaporean Act that made a significant difference from ours.

Singapore:  Among the proposed measures are the penalties in the Act. POFMA carries a jail sentence up to 10 years and a fine of S$ 1 million, depending on the severity of the case.

“(1) Any person who...maliciously creates, offers, publishes...any fake news or publication containing fake news commits an offence and shall on conviction, be liable to a fine not exceeding five hundred thousand ringgit or to imprisonment for a term not exceeding six years or to both…” – paraphrased by Asklegal.

In other words, if anyone “maliciously” creates or publishes fake news, they will be sentenced to a jail term of 6 years (previously 10 years), a fine not more than RM500,000.00  or both if found guilty.

Bots are basically social agents that communicate autonomously on social media. In this case, the Singaporean government wants to prevent bots from influencing a particular court of discussion and/or the opinions of the public.

Singapore: The Singaporean Fake News Act has an extensive list on Bots when it comes to posting fake news.

(3)  Where an inauthentic online account or a bot is used —
(a) to communicate in Singapore the statement mentioned in subsection (1); and
(b) for the purpose of accelerating such communication,
The person is guilty of an offence under the subsection shall be liable on conviction –

Malaysia: There are no laws on online bots and fake accounts, but the Act focuses on individuals and organizations that commit the crime.

Singapore: The government set up a body called the “Competent Authority” which is basically a government elected authority (a group of people) who have been appointed to decide what a fake news is and what’s not.

Malaysia: The Act states that a Minister will be appointed and will be given the power and the responsibility on the law when it comes to deciding what a fake news is and isn’t.

Basically, both the Prime Ministers couldn’t see eye to eye in this matter. They were basically counter arguing their thoughts on the countries respective Fake News Acts during a press conference last month. Here are some quotes from the conference:

"When we have a law that prevents people from airing their views, we are afraid the government itself may abuse the law, as what has happened with the previous government...We do not want any government, this one and the succeeding ones, to make use of the law for the government itself to create and tell fake news in order to sustain themselves.” – Tun Mahathir as quoted from New Straits Times.

"The French have done so, the Germans have done so, and the Australians have just done something similar...Singapore has to do it, and we had a long process with a select committee which deliberated on it for almost two years.” – Lee Hsien Loong as quoted from New Straits Times.

Based on that, it’s pretty clear that there are two schools of thought here regarding this matter. However, it should be taken into account that fake news is a serious problem. This is because, if is it left and un-monitored, fake news can potentially cause fear, misunderstandings and disrupt peace in a country.

While these distinctions sort of make it look like the Acts are very different from each other, we must note that the aim and reason for the Act is to prevent fake news from spreading across the internet.

But at the end of the day, perhaps the best way to prevent fake news or getting into any legal trouble with AFNA, it’s best to take a step back and consider your intentions and the consequences that come along with it. Limiting press freedom also has its negative effects, so perhaps there is no right or wrong in this situation but we could limit fake news by checking on the legitimacy of the news first.

P.S. – just a friendly reminder, as much as the current government is trying to repeal the Act, the Anti-Fake News Act is still very much active in Malaysia, and can get you into trouble for any fake news publication on the internet. So, be wise and be nice. :)