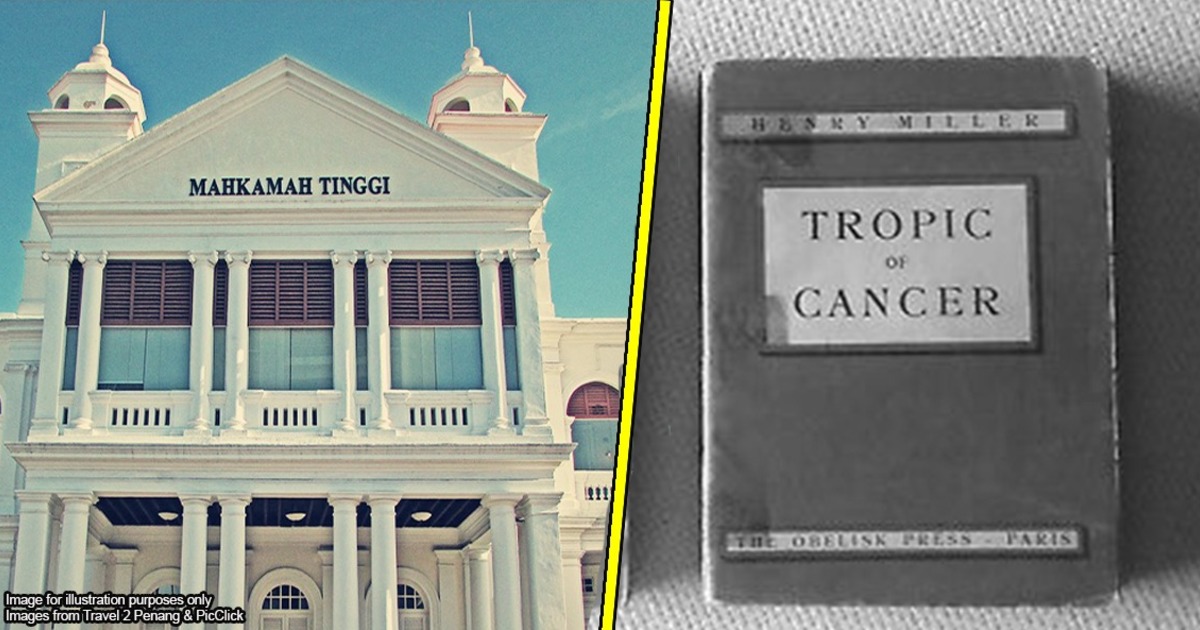 Every now and then we chance upon an interesting case that gives us the giggles for days, and this time we found one from over 50 years ago. The 1963 case of Mohamed Ibrahim v Public Prosecutor is basically about a man who was arrested for selling obscene books. But the interesting bits about this case are all the arguments put forward by the man when he was taken to court. Sadly for him, none of his arguments were accepted, and the judge shot them down one by one. And here’s a fun fact: This judge was Malaysia’s very first Chief Justice, YAA Tun Sir James Beveridge Thomson.

Before we get into what arguments Mohd Ibrahim came up with, here’s some background on the man himself. He was a shopkeeper in Penang and he sold primarily books. Mohd Ibrahim couldn’t speak or read English, so he used the help of a clerk whenever he needed to understand something in English. He’d been working there for 11 years and everything seemed fine, until one fine day in September 1962…

He claimed he wasn’t even selling the books

On that morning, some police officers came to the shop with a warrant to search the place. During the sweep, they found a stack of books hidden under the counter, the very books that Mohd Ibrahim was arrested for. Together with the books, the police also found some receipts and invoices which indicated these books had been bought from a printing firm.

The police then discovered that these books, titled the “Tropic of Cancer” were actually erotica. Under Section 292 of the Penal Code, Mohd Ibrahim had broken the law for selling these books, which were considered to be obscene material.

Whoever—
(a) sells, lets to hire, distributes, publicly exhibits or in any manner puts into circulation, or for purposes of sale, hire, distribution, public exhibition or circulation makes, produces or has in his possession any obscene book, pamphlet, paper, drawing, painting, representation or figure or any other obscene object whatsoever
… shall be punished with imprisonment for a term which may extend to three years or with fine or with both.

The case was taken to the Magistrate Court where Mohd Ibrahim was found guilty and fined $200 ($ because the RM was only introduced in 1967). He appealed this decision, and then the case went to the Criminal Appeal Court. There, his lawyer contended that the books were not for sale, and so, Mohd Ibrahim couldn’t be found guilty as Section 292 of the Penal Code was specifically for the sale of obscene books.

But the judge was quick to dismiss this argument because there was sufficient proof that the books were for sale:

Now that the judge had dismissed this argument, Mohd Ibrahim had two more points of defence to tell the court...

Another one of Mohd Ibrahim’s arguments was that he didn’t think the book was even obscene. The judge obviously didn’t agree with this, and he referred to a “test of obscenity” to define what really was obscene. The test comes from the case of R v Hicklin [1868] where it was said:

“The test of obscenity is this, whether the tendency of the matter charged as obscenity is to deprave and corrupt those whose minds are open to such immoral influences and whose hands a publication of this sort may fall.”

Basically, for something to be considered obscene, it must have the tendency to corrupt society and its morals. Another reason the book had the tendency to corrupt the public was the fact that it was cheap. It was priced at only $3, which meant that it had the potential to reach a lot of customers and that even young people had access to the book.

The judge went on to say the he himself read the book, and that there’s no way the book could be anything but… immoral.

“I myself have read it and I would go so far as to say that I can discover nothing on which a reasonable Magistrate would be entitled to say it was anything but obscene.”

With this argument now out of the window as well, Mohd Ibrahim could now only rely on that fact that he didn’t even know what the book was about.

It didn’t matter that he didn’t know English

The judge said that Mohd Ibrahim couldn’t be considered to be innocent just because he couldn’t read the contents of the book, and he went on to give a few reasons for this.

Most crimes need to be proven with the existence of an actus reus and a mens rea. These respectively mean the act of the crime and the intention to do the crime. But sometimes, an intention is not needed. Just the very act of doing the crime will be enough to convict someone. This is known as strict liability.

The judge said that Section 292 of the Penal Code, which is the sale of obscene books, is strict liability. So, it didn’t matter whether or not Mohd Ibrahim intended to sell the books to corrupt the morals of the public. The act of him selling the books in the shop was enough for him to be convicted.

He added that the reason Section 292 exists is to protect the public from being exposed to the “corrupting influence of obscene books”. So, it was important to ensure that the law was followed to prevent this from happening.

2. He could have used someone else’s help to understand the book’s contents

Mohd Ibrahim had often used the help of a clerk from a lawyer’s office whenever he needed to understand something in English. The judge then questioned him as to why he had not gotten his help, when he had done so most of the time.

Another important point made was, since he was the only person who managed and sold books in the shop, it was his responsibility to know what exactly he was selling.

3. Ignorance of the law was no excuse

Mohd Ibrahim’s lawyer argued that he could not have broken the law when he didn’t even know what he did was illegal, since he didn’t know what the book was all about. But the judge dismissed this, saying that someone cannot be excused just because they weren’t aware that they had broken the law. He said:

“As in other matters, the individual citizen must exercise his own judgement as to what is and what is not lawful. And if he exercises it wrongly then he must face the consequences.”

So, it didn’t matter that Mohd Ibrahim didn’t understand English or think the book was not obscene. He had the means to find out what the book really was about. And so, the court threw out the appeal and Mohd Ibrahim was still convicted of selling obscene books.

[READ MORE: In Malaysia, can you be punished for breaking a law you didn’t know exists?]