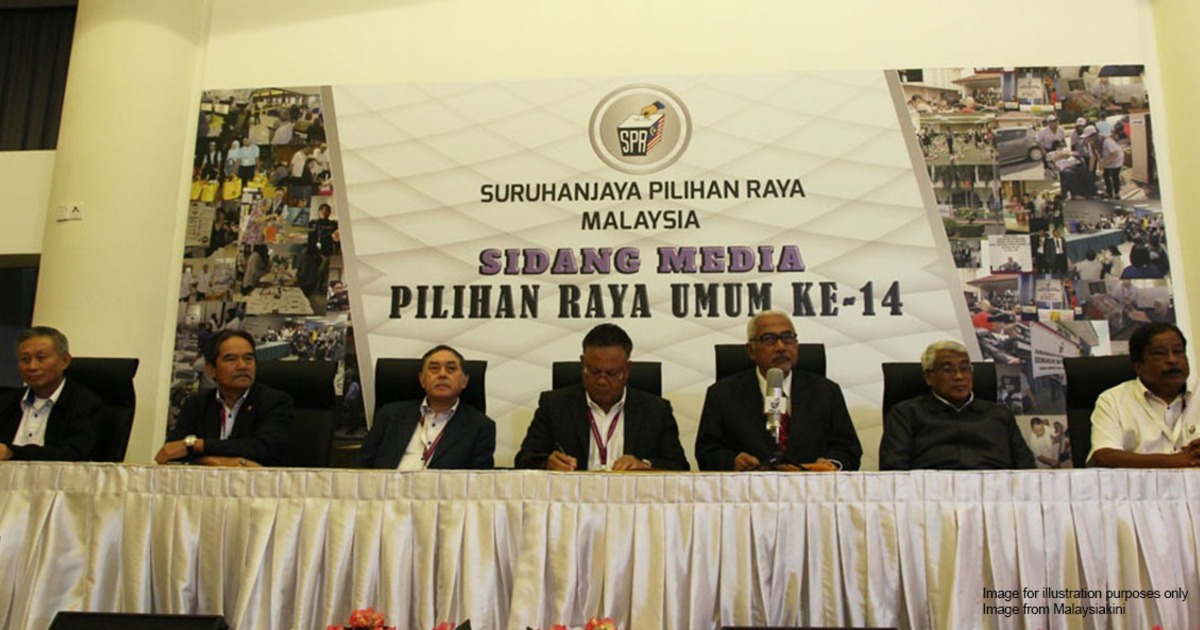 The case of suspected misconduct by 6 EC members during GE14 was dropped. But why?

GE14 was historic because for the very first time, we had a change in government. But many of us who were eagerly waiting for the results remember that it took a very, very long time before it was released. There were accusations made that the Election Commission  (EC) was deliberately delaying the results.

They were also accused of several other things such as rigging the elections in certain parts of the country and preventing voters from joining the queue to vote by a certain time. While we most probably would have heard of these same accusations in previous GEs, it actually got more serious in GE14 because...

And it didn’t stop at them just being accused because people wanted to take action against them. The 6 EC members are:

Bersih filed a complaint saying that these EC members had breached their duties in ensuring fair elections which would otherwise be known as misconduct. Bersih claimed that the misconduct happened before and during the elections and the major ones were:

These were serious allegations, and so a proper and thorough investigation needed to be conducted and so...

A tribunal was then set up to investigate

The Attorney General’s chambers announced that five retired Federal Court judges would be sitting as the panel for the tribunal.  As mentioned, the Agong is the one who appoints these these judges to be on the panel and this right to appoint comes from Section 125 (4) of the Federal Constitution.

The tribunal appointed under Clause (3) shall consist of not less than five persons who hold or have held office as judge of the Federal Court, the Court of Appeal or a High Court

In other words, the 5 ex-judges that were appointed had to have worked as judges in the Federal Court, Court of Appeal or High Court. The ex-judges who were chosen to sit in this tribunal are: Tan Sri Steve Shim, Tan Sri Jeffrey Tan Kok Wha, Tan Sri Zaleha Zahari, Tan Sri Suriyadi Halim Omar, and Datuk Prasad Sandosham Abraham. So the panel had been finalized and all seemed to be going well until...

Apart from appointing the judges, the Agong has the power to “fire” these EC members if the allegations made against them were true. And this power is found in Section 114 of the Federal Constitution:

(3) A member of the Election Commission shall cease to hold office on attaining the age of sixty-six years or on becoming disqualified under Clause (4) and may at any time resign his office by writing under his hand addressed to the Yang di-Pertuan Agong, but shall not be removed from office except on the like grounds and in the like manner as a judge of the Federal Court.

A judge can be removed from office for reasons such as bribery, impartiality and conflict of interest. The same grounds are applied the removal of an EC member. So, the Agong would have to go by this law if he wanted to dismiss an EC member from office. But there was no chance of the Agong deciding on anything because the case took a turn before the tribunal was even formed.

As mentioned earlier, on October 17th 2018 the government started the process of setting up the tribunal for the case. But what happened was, just ONE day later, five of these members announced their resignations. At that point, only one of them, Datuk Bala Singam was still in office. But just a little after a month later, on November 27th, he announced that he was going to resign as well. These resignations were not immediate, though… they were effective from January 1st 2019.

Naturally, a person might have to be fired for breaching his or her duties. But what do you do when they were no longer even a part of that organization? In this case, was there a point in this tribunal continuing the investigations?

The story gets more interesting because it was said that since these EC members were resigning (and not getting fired), they would be getting their pensions. Bersih who had filed a complaint against them in the first place stated that these EC members should not be given their pensions (at least not until their names were cleared).

This whole news of these EC members resigning was not well- received, especially by the Attorney General, Tommy Thomas.

“The resignation of the six Election Commission (EC) members was a deliberate move to frustrate a tribunal set up to investigate their misconduct while in office.”- Tommy Thomas,  Attorney General as quoted by The Star

But the tribunal decided to still hear the matter on the scheduled date and when they did...

The tribunal decided that they will not be investigating the matter

When the tribunal convened on May 24th 2019, they wanted to decide whether the case should even be investigated in the first place. So the main point was, did these EC members have to be investigated since they were not a part of the EC anymore?

They focused on whether the investigation would have any benefit or would it just end up being academic and by extension, whether it was worth spending money, time and energy for something that would be academic.

"The fundamental question today is this: Is it in public interest or indeed national interest to spend so much time energy and expense in going through potentially the whole cumbersome and objective exercise merely to seek the removal of the six commissioners?” –  Tan Sri Steve Shim as quoted by Malay Mail

The decision was a 3-2 majority. Meaning, three of the five judges decided that the matter did NOT have to be investigated, while the other two felt that it should.

But this isn’t the end

Bersih was naturally dissatisfied with the decision made. In a press release that was done on the same day the tribunal convened, Bersih stated that the decision sent out a wrong message that public officials could escape any kind of liability just by resigning.

“If the Tribunal had decided to proceed, the panel and the public would have had the opportunity to hear evidences of how these EC members have committed gross electoral misconducts and violations of the Federal Constitution that have denied Malaysians a free and fair election during GE14.” – taken from Bersih’s press release

Another person who definitely isn’t happy about the decision our Attorney General, Tommy Thomas. [READ MORE: What does an Attorney General do?]. AskLegal got to join other reporters as Tommy Thomas shared his thoughts where he reminded us that the tribunal only made recommendations. This means that their decision cannot be seen has legally binding and that there may be other paths that can be considered. As such, he said that he will be making 5 recommendations to the Agong but didn’t specify what they were.