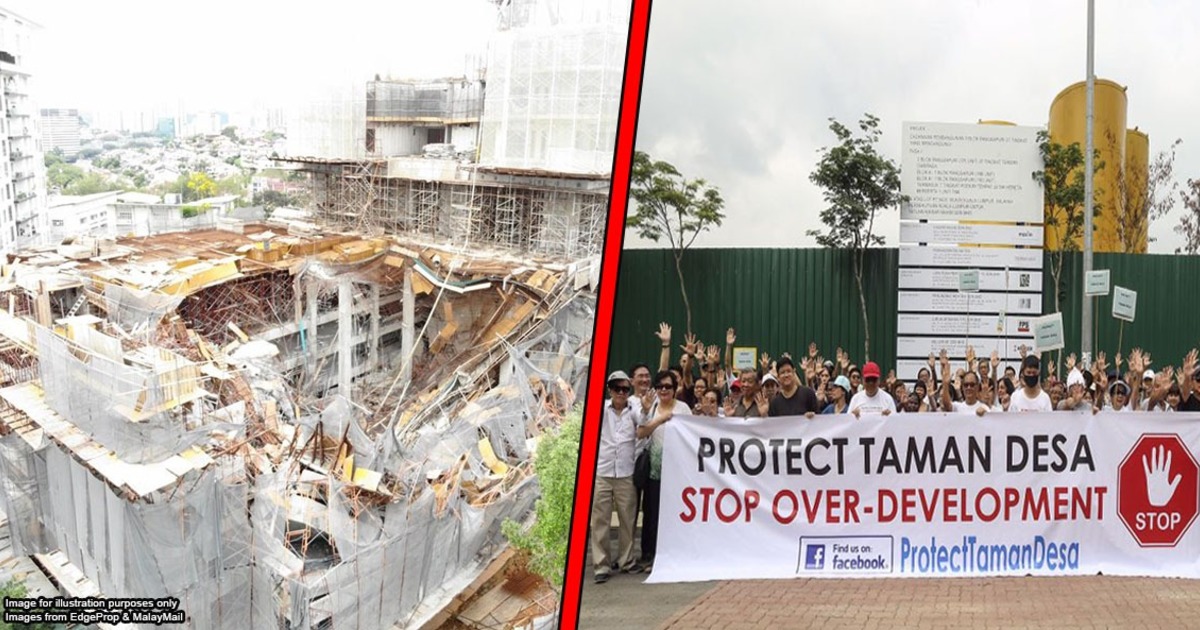 Can you get your money back if your uncompleted condo collapses in Msia?

If you read the news on 14th February 2020, you might know about a condo that collapsed in Taman Desa. Portions of the condo, which was still being built, collapsed during the rain. Luckily, despite the damage, there were no casualties.

But if you were one of those people who had bought a unit in that condo, you might think of these two things:

However, just because your condo collapsed, it doesn’t mean you have to forgo your new home altogether. In most cases of a collapsed condo, the project will go on and the condo will be reconstructed. But naturally, you might not want to live there for the fear of it being unsafe and you might want to ditch the whole idea of moving into the condo.

So, can you end your housing contract and get all your money back? Or would you be without a new house and several hundred thousands ringgit poorer?

You may walk away... if your developer agrees

Before we continue, let’s clarify this: your housing contract, known as a Sales & Purchase Agreement (S&P), CAN be terminated. But it isn’t an easy process as it can only be done in certain situations. S&Ps are normally terminated when the entire project has been abandoned or the condo has been built so badly, that there’s no way anyone can live there, among other reasons. So, as you can see, these are some pretty serious situations, and even then, you’ll have to prove them if you want out of the agreement.

But does your condo collapsing qualify as one of the reasons you can do away with your S&P? Speaking of the Taman Desa condo incident, a property lawyer, Salkukhairi Abd Sukor commented:

"...standard sales and purchase agreements did not provide for an automatic cancellation if a building under construction suffers a collapse."

But, he also went on to say:

"...if the developer of the Taman Desa project agrees to allow any buyer to cancel, both parties must enter into a termination and settlement agreement."

But for that to happen, you and your developer will have to enter a termination and settlement agreement. Basically, it means that you both agree to end the housing contract and when that happens, all legal ties between you and them will be cut. Of course, just agreeing isn’t all, because there are still other conditions that will have to be met before you make your exit. There might be some penalty fee or time frame by which you could terminate the contract. But, this is different for each contract, and you’ll be able to find these conditions in your S&P itself.

Now, let’s say that your developer does allow you to terminate the S&P. Does this now mean that the condo is off your hands and you can get back every single cent you paid? Well…no.

Bad news: You’ll still have to pay your bank loan

Wait, what?! Having to pay a loan for something you’ve washed your hands of certainly sounds ludicrous. It’s even worse when you have to pay hundreds and thousands of ringgit, which you’ll most likely pay in smaller sums for the rest of your life. But here’s the thing: The S&P that you signed was an agreement between you and the developer ONLY. So, when you ended that agreement, you severed ties with the developer alone, and not the bank.

The role of your bank in this whole picture is just that of a financier. So, because they didn’t sign the S&P and only agreed to give you a loan, you will have to pay them what is owed to them. We spoke to a lawyer who further explained this to us, and he basically said this: Even if you terminate the S&P, you can’t get back the money you paid, and you’ll still need to continue paying the loan.

So, you don’t have that new condo unit anymore, but you still need to work overtime to pay off that housing loan every month. Sounds like a nightmare, right? Well thankfully, the law does offer you some other options for relief.

Good news: You can be compensated in other ways

Remember how we said that the only parties to your S&P are you and your developer? So, you can’t get help from the bank but could actually get your dues from the developer itself! Your S&P works just like any other contract. If you’re not too sure of how contracts work, here’s a quick lesson. When you sign a contract with someone, you and that person have a legal duty to fulfill your responsibilities stated in that contract.

So, in the case of your housing contract, you would have agreed, for example, to pay for the house. And your developer, on the other hand, would have agreed to complete the house as promised. This means that if your developer doesn’t build the house in a suitable condition or it was never built at all, they would be breaching (breaking) the contract or housing agreement. Because of this, you can sue them for not giving you what was promised.

An important thing to note is, even if you have terminated the S&P and cut all legal ties with the developer, you still CAN sue them. You are allowed to cancel the S&P on the grounds that your developer breached the contract, and then sue them for exactly that reason.

But you can’t just sue someone for ‘breaching a contract’ – you’ll have to sue them for something more specific. There is a long list of what you can sue someone for (and you should consult your lawyer to know exactly what action you can take against them), but here are some:

If your condo collapses and it was very likely due to the developer’s carelessness, you’ll be able to hold them responsible. In order to sue someone for negligence, you’ll need to prove all of the following:

If your claim for negligence is successful, the court will give you monetary compensation, which is known as damages. But it’s important to note that you may not get 100% of your money back, as the sum of damages given to you will be decided by the court.

An anticipatory breach is when someone’s actions show that they are not interested in fulfilling their part of the contract. One instance where you can sue your developer for this is if the construction of your condo is permanently stopped. For example, in the Taman Desa condo case, the developers have been issued a stop work order, meaning that no construction work can be done for the time being. So, we don’t know when reconstruction work will resume. But in the event that the project is halted forever, you will be able to sue the developers for an anticipatory breach. You’ll need to prove that the developer did something which proves that they do not wish to continue with the construction of the condo. If the project is scrapped, there is no way you will be getting your condo unit and so, the developer will not be able to give you your home as promised.

If your claim is successful, you will receive damages for this as well. And just like for a negligence claim, the sum of damages you will receive is not fixed and is also decided by the court.

No progress of work for 6 months or more

There are cases where the developer actually abandons the project altogether. Meaning, there is no stop work order from the authorities but they don’t plan on continuing the project. Ever. If your condo has collapsed but there have been no reconstruction works done for 6 continuous months, you can sue the developer and get ALL the money that you’ve paid for back AND you can get out of paying the bank loan.

Wait, didn’t we say that what’s paid is paid and you can never get it back? Well, the only exception to that is when the project is abandoned. Under Section 8A of the Housing Development (Control and Licencing) Act 1966, you can be free from your housing contract and you’ll be paid back all the money you spent on a house you’ll never get. You’ll have to meet these two conditions, though:

It’s important to note that you can sue your developer for more than one type of damage, depending on whether or not you can live in the condo after its collapse. Make sure to consult with your lawyer on the best way to claim for your compensation, so that even if you don’t get back all the money that you spent on the condo, you’ll at least be able to pay some part of the bank loan.