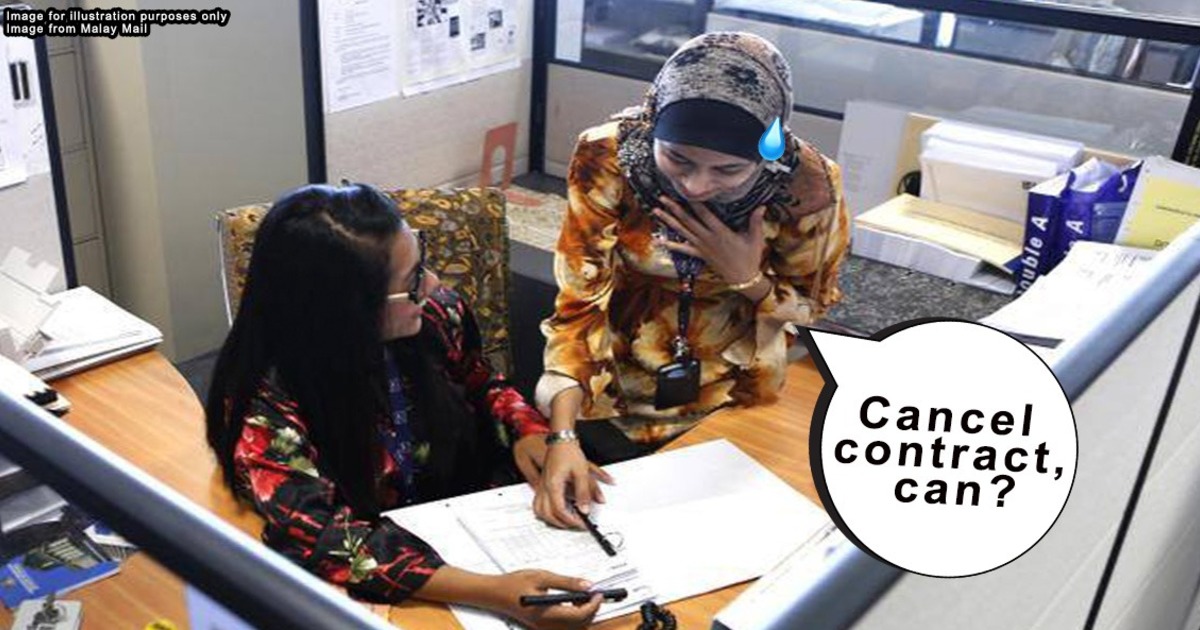 Note: This article was originally written in April 2020.

You’ve been job-searching for months and attended more interviews than you can count. Finally, you get a call from your dream company telling you that you’ve been selected to join them. Elated, you make your way to their office the very next day to sign your offer letter. Everything goes well and you’re all set to join the company in a few weeks’ time.

But three days later, you receive a call from the company telling you that they can’t hire you for now due to financial difficulties. You’re sad and shocked, and you’re not sure if there’s anything you can do about it.

At the time of the writing, we’re in the midst of the Covid-19 pandemic and Malaysians are under the MCO. Due to financial strains, we’ve heard of companies retrenching staff and withdrawing offer letters—  even ones that were signed even before the MCO started. But Covid-19 and MCO aside, employers have also withdrawn offer letters in times where there wasn’t a global emergency. Before we talk about the law on this and whether it’s any different during a pandemic, here’s something you should know...

There CAN be a difference between offer letters and employment contracts

This may be confusing to you at first, but we’ll illustrate it for you:

Scenario A: The company tells you you’ve been hired. They send you an offer letter to confirm this. The letter only tells you your position and starting date. It says that an official employment contract with the complete terms and conditions will be given to you later.

Scenario B: The company tells you you’ve been hired. They ask you to come in to sign an official agreement which lists all the terms and conditions pertaining to your employment. You sign it.

Now, in Scenario A, the company is informing you in black and white that you have been hired, and that an official agreement will follow. But in Scenario B, you are asked to sign a contract immediately, and this would mark the start of a legal/contractual relationship between you and the company. You are now bound by the terms and conditions in the contract, and so is the company.

The bottom line is this: Until you AND the company have officially agreed to being legally bound by a set of terms and conditions, there isn’t really anything that can stop either party from going back on their word. This is why it’s also possible for you to say no a job offer that you previously agreed to, until you officially enter an employment contract.

[READ MORE: Can a company sue me in Malaysia if I turn them down after signing the letter offer?]

But let’s say that you DID sign a contract with all the terms and conditions. While it may seem like the company has to hire you no matter what… it may not be the case.

It depends on how your contract is worded

Besides your main duties as an employee and your employer’s obligations to you, your employment contract will also cover some other stuff such as:

If your contract comes with a particular clause which allows you or the employer to ‘end’ the contract, your company can withdraw the offer even before you join. Usually, this will come with another ‘compensation’ clause—that the company would need to pay you for terminating your contract. If your contract did have a clause like this but you weren’t compensated, you have a cause of action against the company. But, what if there isn’t such a clause in the contract but your offer was still terminated?

There’s actually a legal principle which your company may have relied on to bring your contract to an end, and this is known as the doctrine of frustration. However, this principle doesn’t mean that they can revoke an offer however they like. There has to be an unforeseen event that was beyond their control which has led to them withdrawing your job offer. Some instances would be that the company has gone into liquidation, or the company has gone through a massive restructuring and there’s no need for your role anymore.

We’ll explain this in detail below, but now the question is, can this doctrine apply to situations such as the current Covid-19 pandemic?

Employment contracts can be ‘frustrated’ due to Covid-19

We know that Covid-19 is an unforeseen event. But what does a company need to prove if they decide to use frustration as a reason to withdraw a job offer during this time? There have been no court cases regarding employment contracts being cancelled due to Covid-19 yet, so we’ll look an older employment case to shed some light on the matter:

In the case of MHS Aviation Sdn Bhd v  Zainol Akmar Mohd Noor [2001], the judge in the Industrial Court quoted this from a book known as “Industrial Relations and Employment by Harvey”:

“One instance of termination by operation of law is the doctrine of frustration: where, without the fault of either party, some supervening event occurs which was not reasonably foreseeable at the time when the contract was made and which renders the further performance of the contract either totally impossible or something radically different from what the parties bargained for, then the contract is forthwith discharged by operation of law.”

From the quote, it can be seen that to rely on frustration, the party trying to claim this (the company, in this case) has to prove these elements:

It’s important to note that frustration can be used as a defence to withdraw an employment contract for both Covid-19 and non-Covid-19 situations. It may be easier to prove frustration during Covid-19, especially since many companies have been affected financially. But this does not mean that companies cannot withdraw employment contracts once Covid-19 or the MCO is over— they only need to successfully prove the elements of frustration.

You can still take your case to court

So, let’s say that you’re not buying the company’s excuse of your contract being frustrated due to Covid-19 or some other reason. You still have the right to file a claim in the Industrial Court. The outcome of course, depends on the merits of the case—but you still have the right to be heard. However, you won’t be able to file a claim until the MCO is over as the Industrial Court remains closed until then.

It’s also crucial to be aware of what exactly you’re agreeing to when signing an employment contract. Make sure to look out for any frustration clauses in it so that you would have a heads-up if things were to go bad due to an unforeseen event.