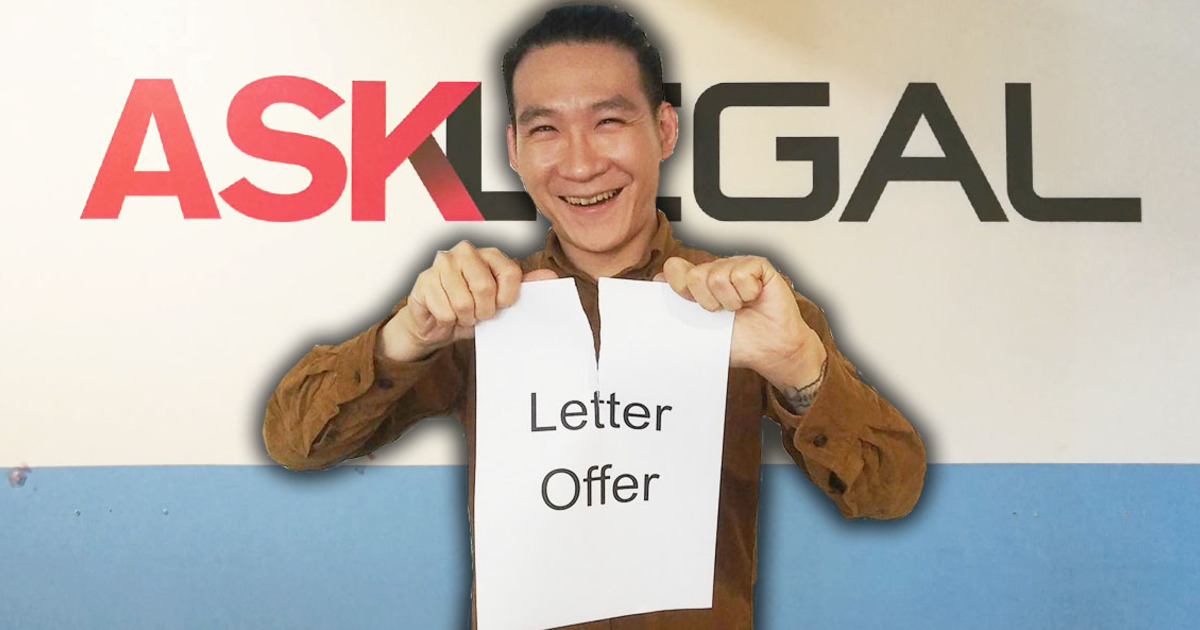 Can a company sue me in Malaysia if I turn them down after signing the letter offer?

It’s been a long two months. Every job application you have sent out has gone unanswered. You are so desperate, you even start applying for jobs that are out of your scope and experience. Finally, you get a call back for an interview. It’s not a job that reallyyy suits you but at this point, you gotta do what you gotta do to earn a living.

Before you are due to start your new job, you receive another offer from the company of your dreams. You immediately sign the letter of offer from that company and call up the first company to tell them you are turning them down.

Enraged, the company tells you that they are going to sue you for going against the letter of offer but can they actually do that?

Before we dive into whether or not they can do that, a letter of offer is technically a contract but...

How is a contract formed in the first place?

In Malaysia, contracts are governed by the Contracts Act 1950 (“CA 1950”) which tells us how contracts can be formed.

Section 2 tells us that contracts are formed when someone makes:

Okay. But what in the world is a proposal?

A proposal, as defined by the CA 1950, is when someone agrees to do something or prevent from doing something in order to get someone else to agree to that act or abstinence. It sounds very confusing but let’s draw up an example for you.

Ali tells Baldeep that he will wash Baldeep’s car for RM10.

Ali tells Baldeep that he will not park his car at his car porch during Baldeep’s birthday party for RM10.

What A did in both examples was give B a proposal. Now, this might sound familiar to you because we generally refer to proposals as offers. For example, you offer someone something and hope that they will accept it.

“The communication of a proposal is complete when it comes to the knowledge of the person to whom it is made.”

This means that if the letter of offer is being posted to you, the communication is not complete yet.

After receiving the communication of the letter of offer (proposal), the ball is now in your court.

Now, you would have the choice to accept, revoke, or even counter-offer.

However, if you choose to accept the letter of offer, then an agreement is formed. However, section 7 tells us a few things that need to be noted while making an acceptance:

(a) be absolute and unqualified;

(b) be expressed in some usual and reasonable manner, unless the proposal prescribes the manner in which it is to be accepted...”

What section 7 is saying is that that for your acceptance to be considered in law, it must be an absolute acceptance. This means that it cannot come with any disclaimers or conditions. An example of an acceptance that would not be legally recognised is as follows:

Ali tells Baldeep he will wash Baldeep’s car for RM10.

Baldeep tells Ali that he agrees...if Ali only charges RM5.

This means that if you say, “Errr...I will accept if you give me extra RM500”, it is not an acceptance. This is because even if you say the magical “I accept” words, it is still considered a counter-offer.

Can the company sue me if I turn them down after accepting?

If your letter of offer is regarded as a contract by the courts, then you failing to uphold your end of the bargain can be considered a breach of contract. Like every other breaches in contract, you breaching the contract gives the company a right to sue for damages. This can be found in section 74:

This then leads us to the next question of…

How much can I get sued for?

Unless the company can prove that you failing to follow through with the job offer has caused them damages, it is unlikely that the court would award them anything but nominal damages (this means very little).

In fact, you might not even get sued because often times, a legal action would cost more than what the company could get from suing you.

Aside from that, as we mentioned earlier, only some offers can be considered contracts. This is because if your letter of offer does not list down all the terms of your employment and says that it is subject to an additional contract or further negotiation, then it is quite unlikely that the courts would view this as a conclusive contract.

At the end of the day, if you are ever caught in a pickle such as this, the best way to deal with it would be to talk it out nicely with the company that you are turning down. After all, rejection does hurt.