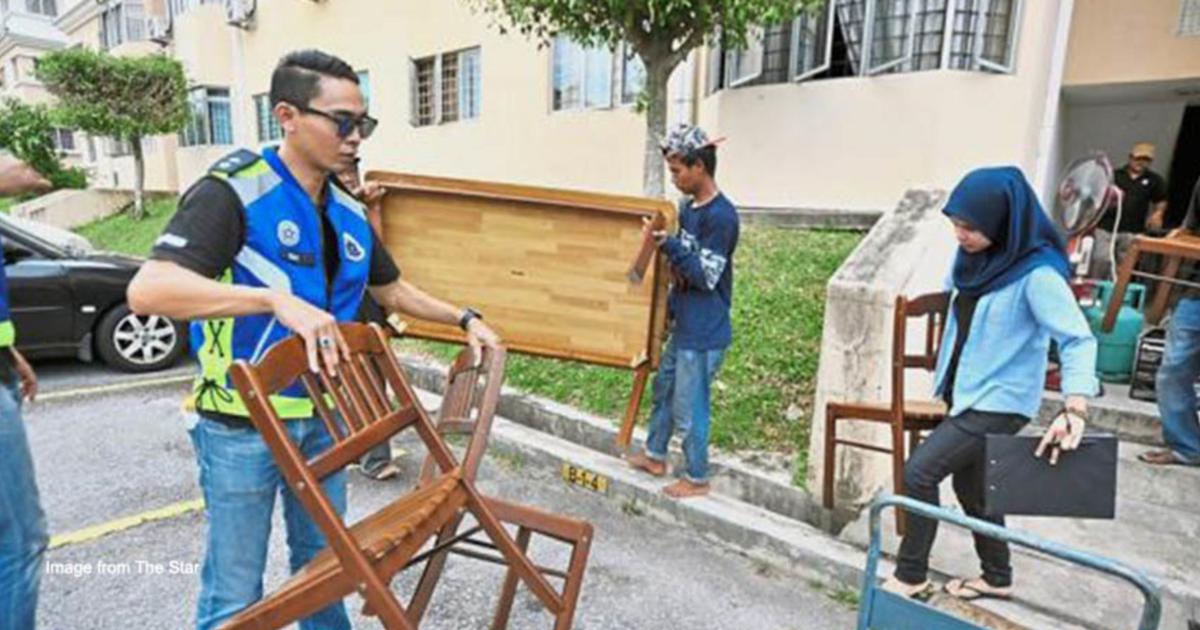 Can the condo management in Malaysia really enter my unit and take my property?

If you haven't been paying your maintanence fees on your high-rise apartment or gated community bungalow, you might want to start doing it soon. It's been recently reported that the authorities have started raiding the units of owners who have been defaulting on these payments and confiscating all movable objects inside - basically phones, laptops, TVs, and even chairs.

As to whether they're actually allowed to do that, the answer is yes - through the Strata Management Act 2013.

With more Malaysians preferring to live in high-rise buildings, it is important for them to know that they are subject to different laws as compared to living in a "traditional" landed house.

So, let's start off with a question that some people might be wondering about, which is...

What the heck is a strata? 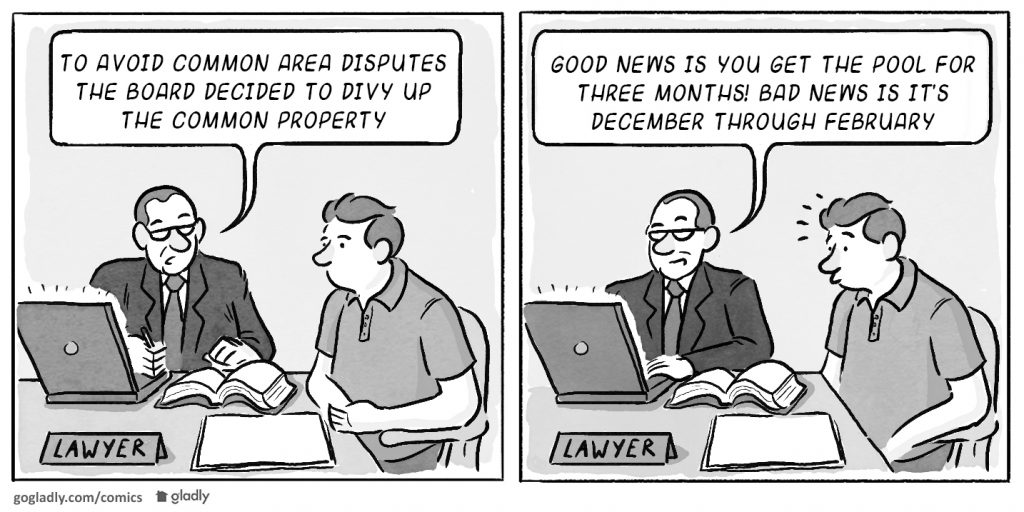 Strata property also comes with strata titles. Strata titles are essentially documents which are issued by the government to prove that you are the owner of the property. If you purchase a new unit from the developer, the title would usually be issued in the developer's name who then has to initiate a transfer to you, as the rightful owner. If you are purchasing a secondhand unit (or usually referred to as a sub-sale), be sure to ensure that the person you are dealing with is the registered owner in the strata title.

At this point, you might be wondering about the more every day scenarios that you might face. For example, who is supposed to manage the common property if you all share them and what if you and your neighbours end up arguing about everything? This is where the management steps in but...who is the management?

There are three kinds of management bodies

If you are living in a strata property, you might have heard people saying, "Got problem ah? Just go to management office and complain lah." However, the question is, who exactly makes up the management and what are they responsible for?

Under the Strata Management Act 2013 ("SMA 2013"), there are three types of management bodies:

The JMB is basically a collaboration between the developer and the owners of the strata property. It is formed within one year of the vacant possession being handed over to you but before the title to your property is handed to you.

Among a plethora of responsibilities that they are supposed to carry out, the JMB has to ensure that the apartment (or land if it is gated and guarded) and its common property is properly managed by keeping it in good repair. The JMB is also supposed to determine how much the maintenance charges and sinking funds (which would be discussed later in this article) would be and then collect it from you and the other owners. These duties are contained in section 21 of the SMA 2013.

In order to carry out its duties, the JMB is also empowered by the powers listed in section 21(2) to do certain things such as collect charges from you and to do all things necessary for it to perform its duties under the SMA 2013.

A useful point to note is that the JMB is a body corporate and has its own common seal. This means that you can actually sue the JMB for failures to carry out its duties and you can be sued by the JMB for failing to pay maintenance charges, for example. This is provided under sections 17(2) and 17(3) respectively.

"The joint management body...shall be a body corporate having perpetual succession and a common seal."

"The joint management body may sue and be sued in its name."

The management corporation has similar duties and powers under section 59 but is only formed once you have received the title to your property.

This means that if a JMB existed before the MC, the JMB would be dissolved and all the responsibilities transferred over to the MC. The management corporation is comprised only of owners to the property, without the part of the developer anymore.

For the sake of clarity, this article will now collectively refer to the JMB, MC and sub-MC as the management body.

So, how can the management body exercise its powers?

An example of how the management body can exercise its powers is shown in section 34 (for the JMB and sections 78 and 79 for the MC and sub-MC) where if you fail to pay maintenance charges within fourteen days of being served with a written notice from the JMB, the JMB can either sue you in court/Strata Management Tribunal or seize the property in your unit. If they choose to seize your property, the Act also allows them to forcibly enter your unit. An example of what has been seized from such raids include flat screen televisions, rice cookers and smartphones which were auctioned off in order to settle the outstanding charges.

The seizure can only happen if the relevant Commissioner of Buildings issues a warrant for the JMB to act in such a manner. The Commissioner differs from area to area and a list of Commissioners in Malaysia can be found here.

Further to the above, if you didn't have a valid reason for failing to pay up within 14 days of receiving the written notice, you are considered to be committing an offence and can be liable for a RM5,000 fine and/or a jail term not exceeding three years (Section 34(3)).

"If any sums remain unpaid by the purchaser or parcel owner at the end of the period specified in the notice (14 days)...the developer or joint management body, as the case may be, may file a summons or claim in a court of competent jurisdiction or in the Tribunal for the recovery of the said sum or as an alternative to recovery under this section, resort to recovery under section 35."

"(1)The Commissioner may...issue a warrant of attachment...authorizing the attachment of any moveable property belonging to the defaulting parcel owner which may be found in the building or elsewhere in the State.

Another instance of how the management body can exercise its powers is that they are allowed to make additional by-laws such as not allowing you to park in certain areas or from keeping pets in the unit.

But wait. Why do I have to pay so many different kinds of charges?

There are two common charges that you would typically have to pay when living in a strata property:

The question is why do you have to pay different charges and what in the world are they used for? Under the SMA 2013, there are various sections that touch on the issue of maintenance charges and sinking fund.

As a quick overview, the maintenance charges seem to be used for daily upkeep of the property and for minor works in order to keep the property in good shape. This includes paying for cleaning services, carrying out inspections on the electrical wirings or water tanks.

In a nutshell, the maintenance charges are used for smaller, every day concerns while the sinking fund is used for bigger, less common concerns. So, what happens if the management body misuses the maintenance charges or sinking fund? If there is a dispute between you and the management body, there is actually a special body that would manage your disputes.

Your case will be heard by the Strata Management Tribunal

The SMA 2013 establishes the Strata Management Tribunal which can listen to any issues listed in the Fourth Schedule of the SMA 2013 provided your claim does not exceed RM250,000. The Fourth Schedule lists down fourteen things that the Tribunal is empowered to listen to. It would make this article too lengthy if we listed down all fourteen items but in a nutshell, you can bring a complaint to the Tribunal if the management body fails to carry out its duties or abuses its powers. You can also bring a complaint if you are in a dispute about the cost of repairs done to your unit or to the common property.

You can also approach the Tribunal to make an order for the management body to release certain information or documents to you or to request for an order to pursue an insurance claim.

However, when you are bringing a complaint to the Tribunal, it is important to note that you would be representing yourself as no lawyers are allowed in Tribunal proceedings. The Tribunal will only allow a lawyer to be present if you can prove that you would suffer financial hardships from the lack of a lawyer or if there are complex legal issues to discuss.

If you are renting the property, you might not be able to bring an action to the Tribunal as tenants are not listed in section 107. However, you may work around this if you can prove to the Tribunal that you are an interested person and the Tribunal would then grant you permission to file a claim with them.

While there are definitely advantages for living in a strata such as better facilities or security, there are also certain drawbacks as a lot of these facilities are not privately owned by you. In that sense, there has to be a certain level of cooperation and possible bureaucracy when things go wrong.

For instance, if you reading this article with a leaky ceiling above you and you are wondering what to do about it, our article on who is responsible when things break down in strata properties is worth a read.

[READ MORE: Living in a Malaysian apartment - who is responsible when things get broken?]