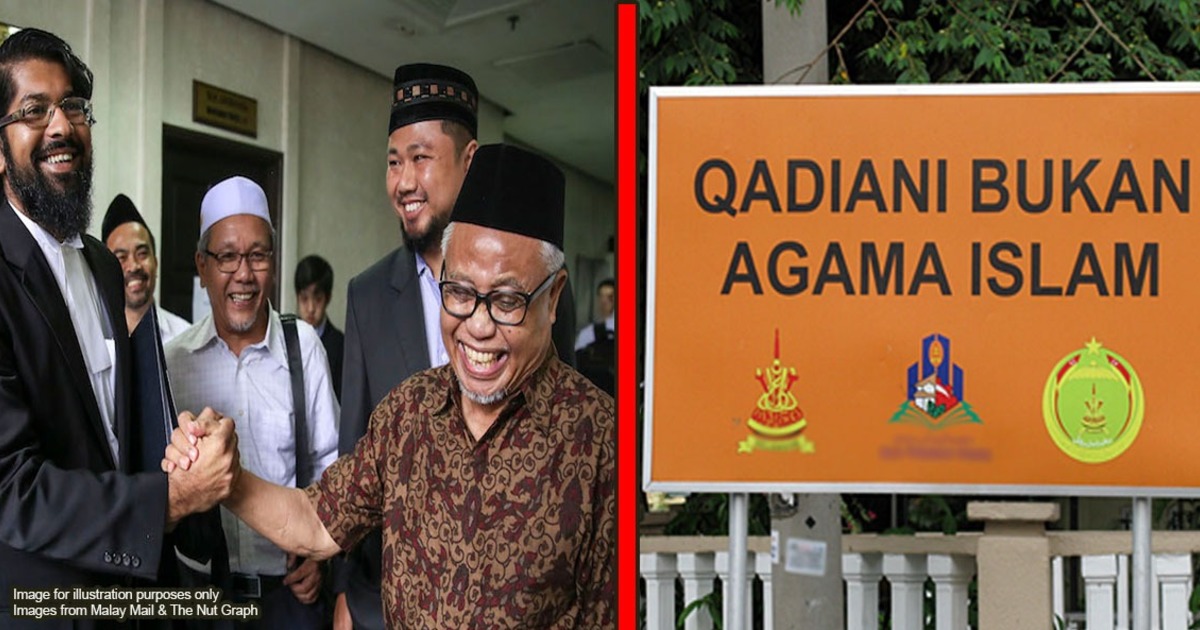 about 3 years ago Mikaela A

Many of us would have heard of the name JAIS before but, if you have no idea who they are, they are the government body that handles all Islamic religious affairs in the state of Selangor. Jabatan Agama Islam Selangor’s main role is to keep the Muslims in Selangor faithfully in check and to ensure that they are practicing their faith as they should.

It would make a lot of sense, then, for JAIS to sue a Muslim in court or for a Muslim to take JAIS to court in cases of dispute. But if you told someone that JAIS was taken to court by a group that is considered to be non-Muslim, they might start looking a little confused since – as just mentioned – JAIS is supposed to look after Muslims only.

But in 2014, a group of people known as Ahmadis, belonging to the Ahmadiyya movement took JAIS to court in a case now known as Maqsood Ahmad & Ors v Ketua Pegawai Penguatkuasa Agama & Ors,. Despite the name, Islamic officials in Malaysia do not consider Ahmadis to be Muslims, so what exactly happened?

To understand the whole story better, let’s take a quick history lesson on this group of people.

Who are the Ahmadis in the first place?

The Ahmadis didn’t originate from Malaysia or any part of the Middle East, instead they came from the Northern Indian state of Punjab. In 1898, a man named Mirza Ghulam Ahmad founded the movement. It started off with a small following, but today there are around 20 million members worldwide. In Malaysia alone it is estimated that there are 2,000 - 5,000 of them.

While there isn’t any solid proof of this, it has been said that the first Ahmadi reached Malayan shores in 1906. Just 19 years later in 1935, a man named Maulana Ghulam Husain arrived in Singapore as an Ahmadi missionary to Singapore and Malaya and that is how the movement is thought to have spread in here.

So, this group’s history dates back to over a hundred years ago and it has spread all over the world, but the thing is...

They’re not considered to be Muslims in most countries

As mentioned above, the Ahmadis themselves claim to be a part of Islam, but the majority of Muslims around the world do not agree with them. Remember we mentioned that the founder of the movement was a man named Mirza Ghulam Ahmad? While this man’s teachings were being spread, at some point he claimed that HE was the Prophet and Messiah that was spoken of. He also said that several parts of the Quran were referring to him.

Obviously, this did not sit well with many because it seemed to be blasphemy against God. Despite the fact that many didn’t agree with Mirza Ghulam Ahmad, many of his followers stayed by his side and the movement kept growing. When it reached Malaya, there were no issues at first. But it didn’t take long for people to point out that this faith seemed to be different from ‘mainstream’ Islam.

In 1953, in the presence of the then Sultan of Selangor and a few Ulamas, JAIS determined that Ahmadis were unbelievers. In other words, they were not Muslim.

Then in 1959 and later in 1970, two plots of land were allocated by the Menteri Besar of Selangor for Ahmadis to bury their dead. This meant that they could not bury a body in a normal Muslim cemetery. In addition, Tunku Abdul Rahman allocated several plots of land for them in Kampung Nakhoda, Batu Caves. And so, a small community of Ahmadis continued to live and practice their beliefs in Malaysia.

But it was only in 1998 where a proper ruling was issued as to the status of Ahmadis. This ruling (known as a fatwa) declared that the Ahmadis would be considered as people who had left Islam and would be treated as such. The Jawatankuasa Undang-undang Fatwa Negeri Selangor (Islamic Legal Consultative Committee) of Selangor stated in a Gazette that:

Two years after that, some amendments were made to that ruling which further clarified the status of the the Ahmadis:

So, for decades now, the Ahmadis were not considered Muslims. Keep this point in mind because it’s the crucial fact that came into focus when…

One Friday afternoon on the 11th of April 2014, JAIS went into the premises of the group in Batu Caves and arrested 38 of its members. Of the 38, three of them were children. When this happened, the group was performing Friday prayers in their centre. JAIS arrested them, saying that the group did not have the right to pray in a place that was a not a mosque. But that wasn’t all.

The group had also not obtained written permission to conduct prayers in such a place. JAIS said that the group had committed an offence contrary to Section 97 of the Administration of the Religion of Islam (State of Selangor) Enactment 2003 which says:

(1) No person shall, without the permission in writing of the Majlis, erect any building to be used or use or cause to be used any building for purposes which may only be carried in or by a mosque.
(2) Any person who contravene the provisions of the subsection (1) shall be guilty of an offence and shall on conviction be liable to fine not exceeding three thousand ringgit or to imprisonment for term not exceeding one year or to both.

Basically, the Ahmadis had conducted their Friday prayers in their centre, when it should have been done in a mosque, and this was an offence. JAIS then issued a Letter of Agreement and Bond to the Ahmadis which said that they must appear before the Syariah court. But what happened was….

Very simply putting it, there were two main points that were debated:

The Bond that was issued by JAIS said that the group was to appear in the Syariah court because naturally, that would be the court that would hear any issues relating to Islam and Muslims. But the case never made it there.

When the case was finally heard in the High Court in July 2018, Judge Vazeer Alam delivered the judgment which essentially said that JAIS had no right to interfere in the matters of the Ahmadis. The reason given was the same as when the judicial review was approved. The Ahmadis aren’t considered to be Muslims, so it didn’t matter where they prayed. Therefore, JAIS had no right to tell a “non- Muslim” group where they can or cannot pray. And not only did the Ahmadis win the case, but  JAIS was ordered to pay RM 25,000 to them as well.

JAIS wasn’t too happy about this and appealed the decision. The case was then heard again in May 2019 in the Court of Appeal. The lawyers for JAIS argued that JAIS did have the authority to investigate and conduct checks on them since some of them had “Muslim” stated on their ICs. But the lawyers who represented the Ahmadis said that the ruling (fatwa) that declared the group as non-believers should prevail since it was an official ruling. At the time of writing, the Court of Appeal’s decision is still pending.

What’s next for the Ahmadis?

So the High Court decided that JAIS has no jurisdiction or authority over the followers of the Ahmadiyya movement, but that’s as far as it goes. It doesn’t change their status and they are still considered to be a religion that is outside of Islam.

This means that they are a separate religion and Section 11 of the Federal Constitution will apply to them.

(1) Every person has the right to profess and practise his religion and, subject to Clause (4), to propagate it.
(4) State law and in respect of the Federal Territories of Kuala Lumpur, Labuan and Putrajaya, federal law may control or restrict the propagation of any religious doctrine or belief among persons professing the religion of Islam.
In other words, the followers of the Ahmadiyya movement are free to practice and profess to be a part of it. They’re just not allowed to spread their teachings among mainstream Muslims in the country.
Tags:
syariah
fatwa
muslim
non-muslim
jais
ahmadi
ahmadiyya
religion