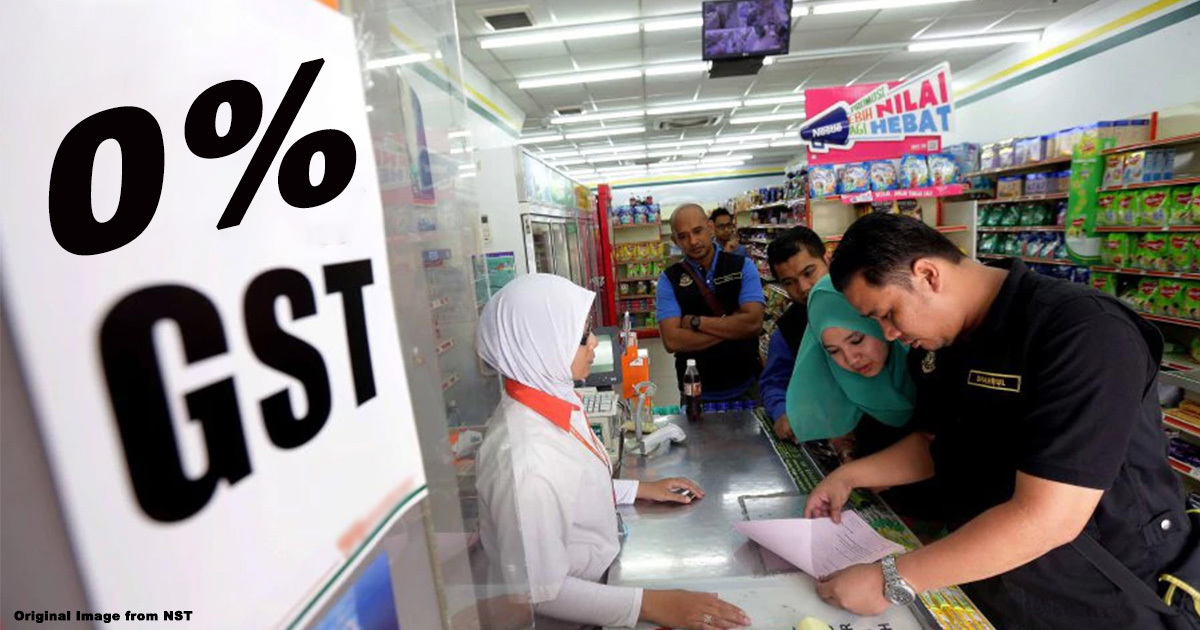 You’ve probably already heard about how fast the Pakatan Harapan government has delivered on its promise to ease the burden of the Goods and Services Tax (GST) off Malaysians. On 16 May 2018, just 7 days after GE14, they announced that GST would be reduced to 0% starting 1 June 2018.

And it’s great news for Malaysians since GST has been blamed for inflation since its inception in June 2014. But why did Pakatan Harapan specifically reduce GST to 0%? Can’t they just abolish it entirely?

No they can’t. The legal consequences of 0% GST and “no GST” are very different. There are transitionary matters to be considered like the fact that business owners will need some time to make adjustments and adapt. But most importantly, Parliament needs to convene before the Goods and Services Tax Act 2014 (GST Act) can be officially repealed, and may be replaced by another tax law. So this is just a compromise Pakatan Harapan has proceeded with to fulfill their promise, even though they can’t abolish the law yet. The date of Parliament’s next session has yet to be determined according to the Calendar for the House of Representatives (Dewan Rakyat).

Other than the fact that GST specialists may soon be out of their jobs, there are some important consequences after 1 June that may not be obvious to the average consumer. We had some difficulty deciphering how the GST Act works, so we interviewed a GST consultant who prefers to remain anonymous to better understand the matter. (let’s call him Bob!)

But first, Bob reveals that most Malaysians still don’t know how GST really works, because there is a lot of false information out there about it. So let’s start by debunking one major misconception that most people may have.

You ONLY pay 6% on what you buy

A lot of Malaysians believe that GST is terrible because the 6% is charged on every step of the supply chain, so the amount gets compounded (which gave rise to social media posts like this one). This is completely untrue.

Bob tells us that GST is essentially a tax on added value. Whenever a manufacturer, distributor, or retailer does business, they get charged 6% on their costs (“input tax”), and they collect 6% on the sales they make (“output tax”). Businesses registered under GST can then claim their input tax back from the government, and send the remainder to the government as provided in Section 38 of the GST Act. This means that those businesses don’t actually pay anything in GST.

If they sell the goods at RM200, they’ll charge 6% on top of that, which means they collect RM12 for that.

The business takes the RM12, minuses off the RM6, and then sends the remainder over to the government.

The net effect is that consumers are only charged 6% on the final price they pay. There are exceptions like zero-rated items which are not charged GST, and exempt supplies which cannot be claimed back from the government. You can find more of the details on how GST works at the Malaysian Customs’ website. If you’re wondering why you felt a crazy increase in prices instead of just 6%, you’ll find the answer in point number 5 below.

With that, let’s get into 5 implications of GST going to 0% on the first of June.

1. Parliament has to approve the 0% GST when they convene

The GST Act states that the Minister of Finance has the power to decide how much GST to charge in Malaysia. He does so by publishing an order in the Federal Gazette, informing the public about the change. This is where you’ll find all changes to Malaysian laws published before they can take effect, and yes, the order for GST to be reduced to 0% is up on the Gazette.

This power is given by Section 10(2) of the GST Act, which states that:

“The Minister may, by order published in the Gazette—
(a) fix the rate of tax to be charged on the supply of goods or services or on the importation of goods; and
(b) vary or amend the rate of tax fixed under paragraph (a).”

Thing is, Section 10(3) states that this change must later be shown to the Dewan Rakyat to be confirmed by a resolution (they vote on the matter). This order needs to be confirmed within 120 days of being shown in Parliament, or it will become invalid. So if MPs later decide not to vote in favour of 0% GST, it can theoretically go back to being 6%.

2. Businesses will still have to do GST reporting

While zero-rated items don’t get charged GST, companies still had to include them in their tax return form under the old rules, although they would be charged 0% GST.

By reducing GST to 0%, Pakatan Harapan is practically making ALL goods and services in Malaysia zero-rated (although the accountants and consultants here will tell us that this is technically not accurate, Bob the GST consultant says that the bottom line is still 0% GST for consumers).

Although this is the case, GST is still “chargeable” under Section 9 of the GST Act, and companies will still need to file their tax returns every month as required by Section 41. Failing to file a return can get the company fined up to RM50,000 and/or the persons responsible could get jailed up to 3 years.

It may seem unreasonable and silly to file tax returns on 0% GST, but this is a transitionary inconvenience that we’ll have to put up with until the GST Act is repealed by Parliament (or not).

Whenever there are rules, there will be those who try to game the system to their own advantage. According to Bob, GST’s framework was helping to catch businesses that were committing tax fraud against the government - by keeping the taxed amount for themselves.

This happens when a company tries to underdeclare their sales, so that the amount of tax they collected looks smaller on paper. This was a big problem under the Sales and Services Tax, because taxes were “single tier” (only collected from one part of the supply chain), and so you didn’t have any documents you could cross-check or verify with.

“GST is actually a more efficient tax system than SST. It’s easier to identify fraud using GST because we analyze the entire supply chain on a line-by-line transaction basis. If I’m a customs officer who is auditing a company’s taxes, it’s very easy for me to locate irregularities in their numbers by cross-checking with the records from their customers and suppliers.”

- Bob, in phone interview with ASKLEGAL

While we’re positive that the new government will discuss tax fraud as part of the new tax system, GST did provide a decent framework that was not easy to cheat.

4. Businesses won’t have as many cash flow problems

Some credit-term businesses ran into financial trouble when GST rolled by. Bob says that GST requires a business to foot the GST bill upfront, possibly before even getting paid by their customers. This is why he expected Malaysia to implement GST gradually, like Singapore did.

You see, Singapore started off their GST at 3%, before gradually going up to 7%, giving businesses enough time to adapt and create a cushion for themselves. Malaysians felt the sudden impact of GST because we started at 6% right away, and our businesses had to foot a big GST bill upfront, and then wait a few months to get paid.

“For example, if my business gives customers 60 days to settle their invoices, I still have to submit the GST on my sales at the end of the month. On top of not actually getting paid by my customers yet, if I qualify for a GST refund, it also takes a long time for the government to process and pay it back. They’re not very efficient about it.”

- Bob, in phone interview with ASKLEGAL

To clarify, companies get GST refunds when they pay a higher input tax – their cost of goods is higher than their sales. An example scenario would be buying a property to be rented out, the upfront cost for the building is much higher than the rent collected each month, so the government pays them back because they weren’t supposed to be charged in the first place. This caused a lot of businesses to not have enough cash on hand to pay their bills. With GST going away, this is one of the advantages businesses will get out of it.

5. Prices may or may not go down

You might have already speculated that some businesses won’t actually cut their prices even after GST is abolished, and will keep their old profit margins plus the nice 6% bonus. This is a very real concern, but the price problem didn’t start there.

Many consumers are unhappy about GST because prices rose more than 6% - which makes GST look like a really bad system. Apparently, a lot of retailers used GST as an excuse to raise their prices, but according to Bob, your local reseller might be telling you the wrong thing just to earn a quick buck!

This concern was why the Price Control And Anti-profiteering Act 2011 was passed before introducing GST. The law basically introduced a formula to measure and control a business’s profit margin. You were not allowed to increase prices if your costs didn’t increase. This was meant to be used together with GST so that prices would not be raised with GST as a convenient excuse. Remember again that the GST system does not charge businesses, only end consumers, so any rise in prices beyond the 6% from GST itself was unjustified.

Bob tells us that the problem might have been that the anti-profiteering regulations were not well known, and consumers didn’t even know that they could make complaints about drastic hikes in prices. He also claims that the enforcement on the Price Control And Anti-profiteering Act was not good enough, so a lot of greedy vendors got away with ridiculous price increases.

As for whether we can get businesses to lower their prices in response to the removal of GST, Bob says we have to wait for any new laws that might be passed to come out and get enforced.

If you feel that prices have increased unfairly since GST was implemented, you can actually make a report to the Ministry of Domestic Trade, Co-operatives and Consumerism (KPDNKK). You can find their e-complaint system over here, but there are also other ways to contact them, which you’ll find at the end of our other article below.

[READ MORE - If you get overcharged for nasi campur, can you refuse to pay?]