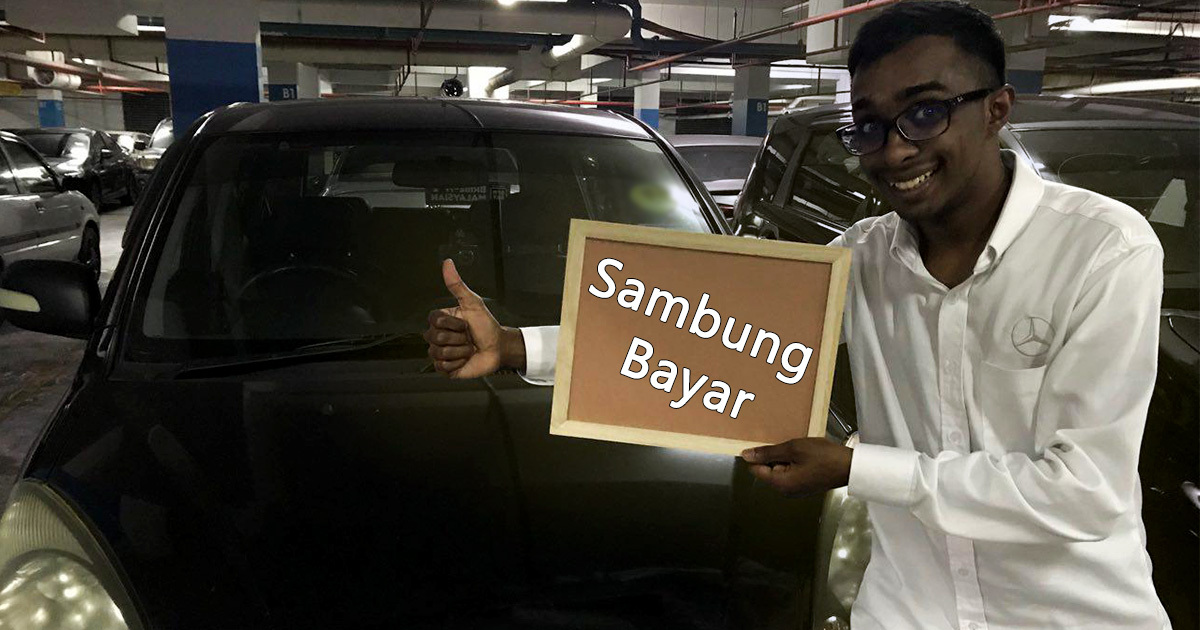 Buying a car is really expensive. But you’ve got more than just the initial price tag to consider, there’s still the hidden costs associated with owning a car. Not only is the down payment high, there’s the maintenance, insurance, road tax, and fuel costs to think about. And this is all just so you can go to work. Public transport is an option, it’s not always practical or convenient for everyone.

With that in mind, there are some ways that you can get a car without breaking the bank. The most obvious way is probably by buying a second-hand car. The thing is, not everyone may qualify for a hire purchase loan agreement with a bank, so they turn to a rather attractive deal commonly known as sambung bayar (“continue payment”).

The usual scenario is that the owner of a vehicle is still servicing the loan, but may want to sell the vehicle already. They don’t really want to incur the hassle of properly selling off the car, or they might be in need of quick cash. The buyers also get good deal since they don’t have to foot the full price of the car - they just need to place a much lower deposit, and commit an installment payment each month.

The arrangement is called sambung bayar because the owner “sells” the vehicle to a buyer, who continues to make the monthly installment payments for the owner’s loan. Although the seller lets the buyer take the vehicle, it stays registered under the seller’s name.

The seller will usually ask for an initial deposit from the buyer, and they’ll either sign a contract, or shake hands on the agreement.

But people who use sambung bayar are not protected by law

Any contract signed as part of a sambung bayar agreement is not legally enforceable because banks usually put a condition in the hire purchase loan stating that you cannot resell the vehicle without their permission. Hand-shaken agreements are also usually not enforceable, which puts you in a bind if the other party breaks their promises.

[READ MORE - Can I sue someone who promised to marry me, but doesn’t?]

This is why people usually make sambung bayar arrangements between family and close friends - there’s a higher level of trust between them. But, it’s still not advisable because there’s yet another 5 risks you have to deal with, and most of them have nothing to do with your Uncle Razak’s reputation as an honest man.

Sambung bayar agreements are made illegal under Section 38 of the Hire Purchase Act 1967, which states that:

“Every person who, by the disposal or sale of any goods comprised in a hire-purchase agreement, or by the removal of the goods, or by any other means, defrauds or attempts to defraud the owner shall be guilty of an offence…”

We should make it clear here that when you buy a car using a hire-purchase agreement, the bank owns your car until your loan is paid off. So you don’t actually have the right to sell off your car unless you ask the bank and make the necessary arrangements with them. Breaking this law can get you fined up to RM30,000 and/or a prison term of up to 3 years.

This law is also the reason why sambung bayar contracts all have no effect. They are what the law calls void ab initio (invalid from the start). Section 24 of the Contracts Act 1950 basically says that if a contract involves doing something illegal, then it is not enforceable by law.

2. You are responsible if your buyer stops servicing the loan

Remember how the vehicle stays registered under the seller’s name even after doing a sambung bayar? If you sold a vehicle to someone using sambung bayar, this means that if the buyer fails to pay for your loan, you have to pay for the loan instead or face the consequences - which affects your credit score, which then affects your ability to apply for loans in the future.

As a side note, any summonses the buyer gets while driving the vehicle also get slapped on you. You’re put at a big loss since you have to foot a lot of responsibility, while someone else gets your car. But it doesn’t end here because if the person you sambung bayar-ed your car to stops paying and refuses to return the car…

3. You can’t report your vehicle as stolen

That’s right. This is because you have voluntarily given your vehicle away to someone else. The definition of “theft” in our Penal Code is in Section 378, which says:

“...intending to take dishonestly any movable property out of the possession of any person without that person’s consent, moves that property…”

A buyer under sambung bayar does not dishonestly take your vehicle away, and you have also willingly given it to them, so you can hardly claim that your car has been “stolen”.

The saving grace here is that you might be able to report it as a case of cheating, as has been clarified by the Home Ministry before. You’ll be relying on Section 420 of the Penal Code - “cheating and dishonestly inducing delivery of property”. This can be used in situations where, say, someone wants to use sambung bayar to buy your motorbike, and offers RM1,000 as deposit, but later does not make any payment for your loan at all (to cheat you into selling for a low ball price)

As for the buyers under sambung bayar, they may have a few things to reckon with too.

4. Buyers never get the vehicle legally transferred to them

While it might seem obvious, buyers are not protected by the insurance policy on a vehicle that is not in their own name. This is easily remedied by adding their name as a second driver on the insurance policy. But there’s another problem they need to worry about if the person who sold them the vehicle passes on.

The vehicle gets inherited by the seller’s family.

If they come knocking on your door, you don’t have any real choice but to let them take the car back. That is assuming you were sold a legit car in the first place because...

5. You don’t know if you’re being sold a cloned car

Many buyers using a sambung bayar scheme have found themselves in a lurch after finding out that they were sold cloned cars. One doctor from Alor Setar was a victim of such a scam back in 2015.

These cloned cars can come with fake chassis registrations (or can even be unregistered) and duplicated number plates as well as a forged road tax. Victims usually only find out after being stopped by the Road Transport Department (JPJ) or when they try to renew their road tax by themselves instead of through their agent.

Vehicles that are not properly registered can get confiscated by JPJ before being auctioned off by the Court. As the owner of the vehicle, you can also be convicted of an offence under Section 7 of the Road Transport Act 1987 for owning an unregistered vehicle, and you may be fined between RM2,000 and RM10,000.

Cloned cars have been around a long time, since about the 1980s according to a car dealer from our sister company Carsome. You can read more about cloned cars on this article by CILISOS here.

Only buy cars through legitimate means

All these laws surrounding the sambung bayar practice really just boil down to one point: if you choose to forgo the responsibilities under law, you could also forfeit the rights and protection you would have gotten. No matter how lucrative a sambung bayar deal may look like, the long term costs and trouble are probably not worth any bargain you’re getting.

In response to the doctor’s case we mentioned, Kedah’s JPJ Director, Amir Onn Mustapha has urged the public to bring any vehicles they intend to purchase to Puspakom or JPJ for inspections. According to him, it’s difficult for an untrained eye to tell if a car is legitimate just by looking at its exterior.