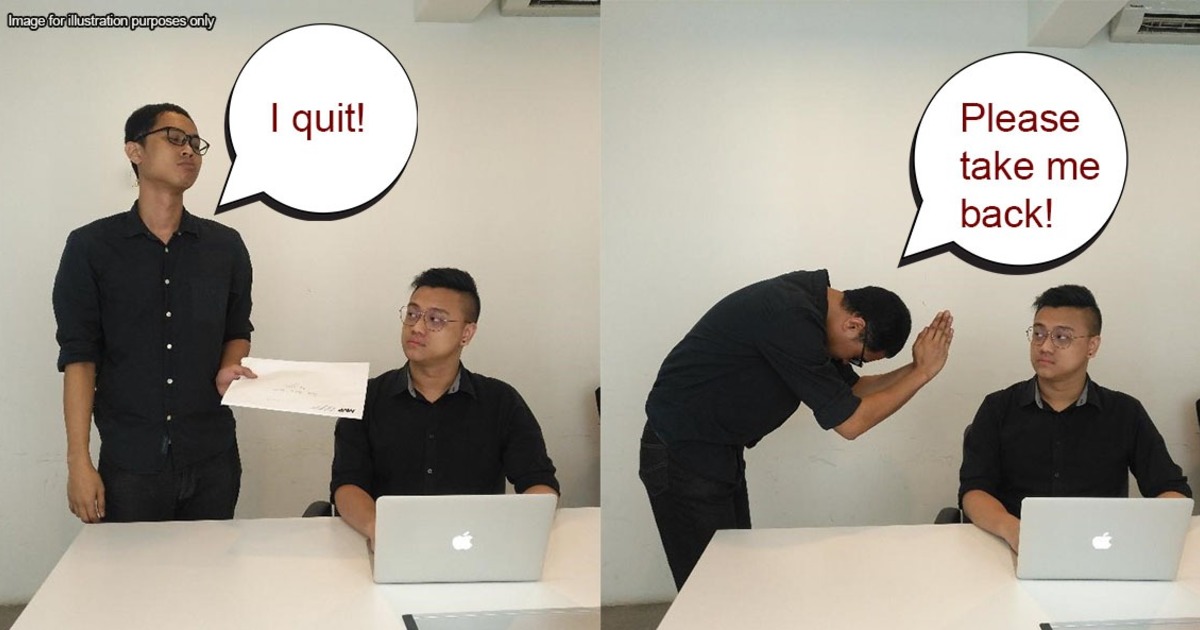 In Malaysia, can you withdraw your resignation letter after submitting it?

Imagine this: One day, you get into an argument with your boss and, in an impulsive decision, you decide to quit. You send out an e-mail to your whole team, including your boss, saying you’re resigning. Within minutes, your boss sends you a reply saying he accepts your resignation. But the next day, once you’ve cooled down, you realise that the problem was a very petty one and you regret acting hastily. After all, this is your dream job and the pay is great!

So you go up to your boss’ office to apologise and you tell him that you’d like to withdraw your resignation. But he declines your request, stating that you have officially resigned and have started serving your notice period. You’re in so much trouble because well, you just lost your job! You now want to know if there’s anything you can do to get your resignation—and crucially—your job back.

A resignation that has been accepted cannot be withdrawn

So, we now know that once accepted, a resignation can’t be taken back. So does that mean that if your boss didn’t accept your resignation, there might be a chance for you to withdraw it?

That can get a bit complicated, because under the law, ‘acceptance’ can have a slightly different meaning.

What exactly amounts to ‘acceptance’ of a resignation?

When you send your resignation notice, you might think that only an official email or letter acknowledging it is considered as an acceptance.But what if your boss didn’t respond at all?

Interestingly, even if you don’t receive an official response, your resignation can still be considered valid and effective.

But wouldn’t you need an official letter to confirm it?

Not really. See, in your employment contract, it will state what you need to do in order to resign. Typically, it will say you need to serve X months’ notice or pay the company a certain sum to the company. It would look something like this:

The key word here is notice. As long as you have sent your resignation in writing, that is enough to terminate the contract. Your boss doesn’t need to agree or even respond to your resignation. Once he is aware that you want to resign, that will amount to acceptance.

This requirement is also stated and in the law and it can be found in the Employment Act 1955. Section 12 states:

But despite you not being able to withdraw your resignation, there is still a chance that it could happen. That decision, though, would not be up to you. It depends on your boss.

You can keep your job… if your boss agrees

So it needs both parties to agree. In the Industrial Court case of Sime Darby Bhd (Sime Darby Plantations- Hadapan Estate) v Khalid bin Abdul Rahman & Anor [1998], the employee had resigned due to some issues at work. He never attempted to withdraw the resignation. However, it was found that even if he did try to retract the resignation, it would not have been successful. The judge said:

“...once a notice of resignation is given, the employment comes to an end on the expiry of the notice and cannot be unilaterally withdrawn save by mutual consent.”

So, if your boss wants to let you continue working, he can. But at the same time, he still has the right to decline your request.

Look out for what’s in your employment contract

At the end of the day, it’s really important for you to know what your employment contract says about your rights as an employee. If, for example, your contract strictly states that you are not allowed to resign for the first 6 months, then you might have a chance to withdraw your resignation before you hear from your boss. However, if there is no such term is clause in your contract, you can’t take any legal action against him because no such thing was agreed upon.

And even if you do bring your case to court, the general understanding is that your resignation can be withdrawn only if both you and your boss agree to it. So always be sure to know what your company policy is and read through your employment contract before signing on that line...as well as when signing your resignation letter.