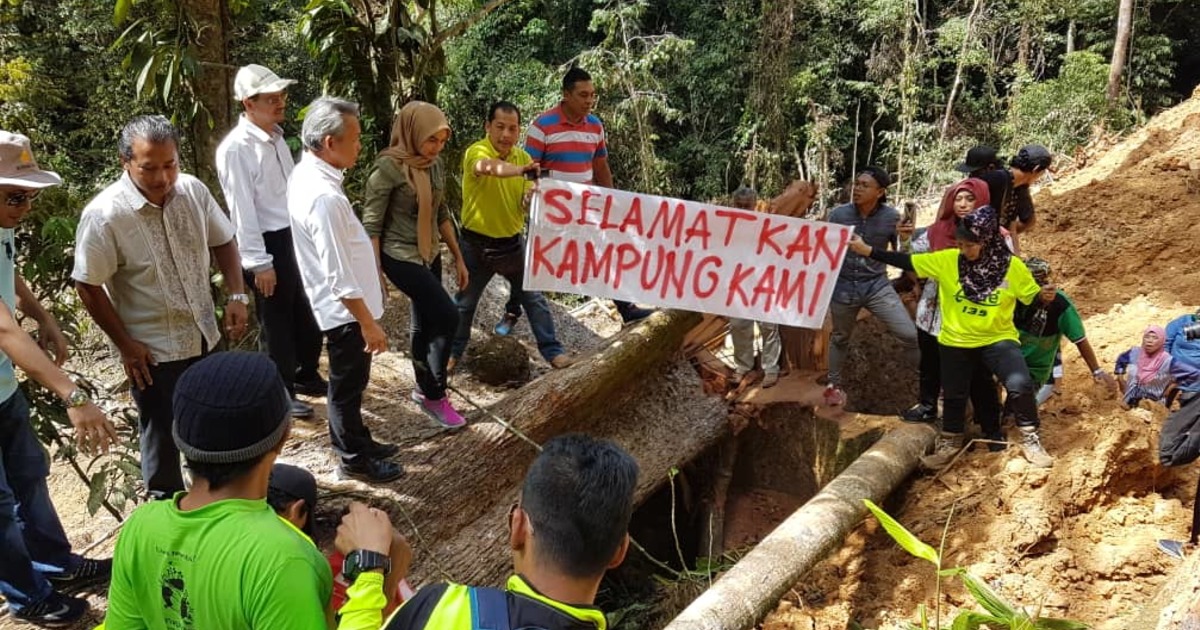 Imagine living in a chalet up in the mountain forests, away from the bustling city, away from all the concrete and steel. And then one day, you wake up to find the very thing you want to avoid, right outside your chalet.

A power pylon in all its power-carrying glory, except the forest isn’t fine like in the picture above, it’s more like… sand and dirt instead of trees and rivers - more like this:

This was what happened near the village of Janda Baik, Pahang; where one of TNB’s power pylon projects - the 500kV Bentong South-Lenggeng Transmission Line Construction Project - went wrong and damaged the forests, causing landslides and drying rivers. The residents’ livelihoods were also affected, and they have been strongly protesting the project for a long time.

Before you go around shooting nasty comments at TNB, let’s evaluate the root problem - if you’ve ever had your power cut for one day, you’d know how important it is to have an uninterrupted supply of electricity. However, until someone finds Tesla’s supposedly lost plans to wirelessly transmit electricity, we’re stuck with receiving juice through cables. And that requires pylons to channel power from the source to your house - and these pylons sometimes have to be built through forests and mountains (and sometimes close or through housing areas).

But at the same time, TNB obviously can’t be given full freedom to bulldoze through everything in the name of uninterrupted power supply as it would be...an abuse of power (ba-dum pishh). In all seriousness, they can’t because...

They need to pass some tests first

On 14 August 2018, there was a meeting between TNB officers and Villagers Association of Janda Baik, as well as the Resort Owners Association (who have affected chalets there), up in Janda Baik itself. Representatives from the Department of Environment Malaysia, and the Forestry Department Peninsular Malaysia were also present, along with the state representative (ADUN) of Ketari herself, Young Syefura Othman. This writer decided to tag along after contacting Ashari Shuib, a committee member of the Resort Owners Association. Here’s what we learned:

Undertaking an infrastructure project obviously isn’t as simple as finding a piece of land and starting construction, you’ve got to get approvals from the state government first (because they’re in charge of land administration), and you have extra processes to go through if you’re building in a forest - even more so if it’s a forest reserve.

We don’t have the exact process for a company like TNB to set up an infrastructure project, but one of the things they need is an EIA and an EMP from the Department of Environment before their project proposal can be sent to the authority in charge - in this case, the State Executive Council (Majlis Mesyuarat Kerajaan Negeri - MMKN) - for approval. We’ll get to what those acronyms mean below:

Well, the name is self-explanatory - the EIA is a report that needs to be prepared in development projects through the Department of Environment , whether it’s mining, housing, or utility projects. It’s a planning tool that evaluates the risks to the environment of a project, and details mitigation measures to be taken. So if a project would destroy an entire forest, the EIA will raise a red flag to tell you that the project is a bad idea, so you’ll have to figure out how to minimize the environmental impact of the project before it even takes off.

You can read more about how the EIA works here.

Despite the cool-sounding name that reminds many people of “electromagnetic pulse”, which also uses the short form “EMP”, it’s actually another document that contains the plan for how the EIA’s objectives will be attained. It contains everything from short and long-term strategies,  who’s in charge, how the situation will be monitored… It’s a bit like an operation manual for how the development project’s environmental impact will be managed over time.

You can find more information about for the EMP works at the Department of Environment’s Guidance Document for EMPs. There’s also a sample EMP report you can look at here, as well as a skeleton for what should be included in a typical EMP report.

In short, TNB would need to survey their planned power pylon alignment and go through the required processes, before submitting their proposal to the MMKN for approval. After all that, they can get a license to proceed with the construction.

While it may sound simple on paper, it wasn’t as straightforward in actual application because...

TNB actually went through a few options to make everyone happy

Being in Pahang, TNB’s project near Janda Baik was approved by the Pahang State Government (a process that ran from 2008 up to 2017). According to what we gathered from the dialogue session, there were a few pylon alignments proposed which didn’t go through for several reasons.

Alignment 1 - cuts across the border of Janda Baik, but also goes across several rivers flowing into Janda Baik

Shown in pink in the diagram above.

Janda Baik’s villagers didn’t like this one obviously, seeing the risks it posed to their land. TNB took this into consideration and looked for alternatives.

Alignment 2 - direct route across the forests, but cuts across multiple structures

This alignment goes from the start of the pink line, and cuts directly across Janda Baik, and does not go around the village.

TNB explained that they did some surveillance using drones to find alternative routes. This one was the most direct, and would have saved them an estimated RM5-10 million in costs (less pylons required). But this route involved cutting across some 50 or so structures, and they have a standard practice to avoid existing infrastructure when building - so this was a no-go.

Show in green in the diagram above.

This one was a middle-ground suggested by Janda Baik’s citizens, that TNB took up and surveyed, but was ultimately dropped because the viable route ran too close to multiple counts of existing infrastructure, including the Karak Highway. There was also the concern of the project crossing into Selangor, which were too close to another network of rivers, but would also further complicate the project approvals.

There was a big controversy on this alignment because the villagers say they know multiple ways the pylons could cross nearby a flat expanse of land and close to a farm - easier to work with than mountainous forests.

We, being legal article writers and not land surveyors nor residents of Janda Baik, couldn’t verify what the lands are actually like or what are the best decisions to make.

From the above, the State Government had approved Alignment 1, for reasons that were not discussed during the dialogue session we attended. In oversimplified terms, the State Executive Council told TNB to cut across Janda Baik’s border and risk damage to the environment.

The EIA and EMP addressed and minimized those environmental risks, and with that in mind, the project went forward and loggers were called in the clear the land needed for the pylons.

This, is where things got complicated…

TNB followed the EIA, but the loggers they hired didn't

Okay, legal technicality time. The problem here was that for some reason, the logging contractors working for TNB violated the EIA’s requirements, but the loggers are not subject to the EIA in the first place, it only binds TNB. So, since TNB hired the loggers, TNB should be held responsible, right?

[READ MORE - If a worker hurts you by accident in Malaysia, do you sue him or his boss?]

So we had a responsibility deadlock where TNB didn’t violate any rules, but they were stuck with the consequences of the loggers’ actions (who are not bound by the EIA). Perhaps it will be decided that TNB was in fact responsible for the loggers’ conduct and will be penalized, maybe only the loggers will be punished - but we don’t know how the regulations behind that will play out for now. We’ll update with any developments when we hear them!

But why was it so difficult to figure out who was at fault?

Even then, the Forestry Department’s role also looked like just an advisory one; the final decision still rested with the State Executive Council (MKKN) - which has already stepped down and released all responsibility (they did not send a representative to the dialogue session on 14 August 2018). So in a way, it’s hard to point the finger of blame when the hand doesn’t exist.

The temporary resolution was this...

As rowdy as the dialogue session got, there was a good exchange of views and concerns facilitated by ADUN Young Syefura Othman, and fortunately, a resolution was agreed upon that:

It’s great to see that the government is willing to listen to the people’s concerns in this manner. Whichever pylon alignment is going to get approved, it’s going to be between Malaysians getting better electricity infrastructure, and the people’s wishes will be heard - so we guess this means…

Power to the People?