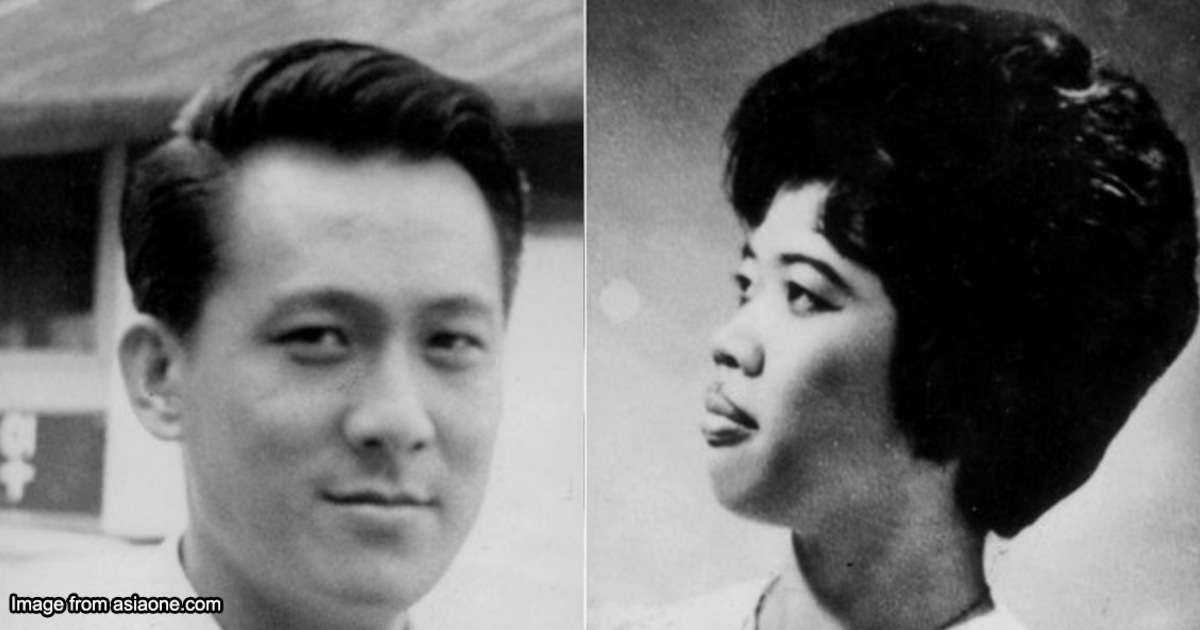 A Singaporean case changed Malaysia's law on murder... But how?

If you’ve ever read true crime stories or watched a movie where someone gets murdered, you’d know the first thing every killer tries to do is to get rid of the body. This is based off the mistaken belief that no body = no evidence = innocence, and some killers actually go through great lengths to completely destroy their victims’ bodies, such as “Acid Bath Murderer” John George Haigh, who dissolved his victims in acid-filled drums.

However, this isn’t true because you CAN get convicted of murder even if a body cannot be found - and it’s no different in Malaysia. The basis for this actually came from a 1963 murder that happened in...Singapore.

So let’s shed some light into the world of Sunny Ang and what happened in the dark waters off Sentosa Island more than 50 years ago.

He was your dashing young man, a little bit of a rascal, given his flamboyant character. A great scuba diver (readers, hang on to this little nugget of information) and a novice race car driver.

While prospective in-laws may think that this man named Sunny Ang would be a great catch, others may reel away from his unsuccessful career. Sunny Ang was your failed pilot, failed teacher, and failed law student (this writer is spiralling down the same path). He was also declared a bankrupt after failing to pay up a judgment debt. Things are not looking great for Sunny Ang despite his classic good looks.

This is where Jenny Cheok Cheng Kid enters the stage.

In 1963 after Sunny Ang had failed in three different professions on top of having killed someone through negligent driving and was in trouble for attempted burglary, he met Jenny Cheok.

She was a single mother of two who was separated from her husband and only had a Standard 3 education. She was working as a waitress/barmaid in Odeon Bar and Restaurant. She was poorly educated and struggling in life while he was educated, seemingly worldly in his experiences and exotic hobbies. Maybe we have been watching too many romance movies but it might not be very far to say that he charmed her off her feet in 1963.

But there was no fairytale ending for Jenny

So, Jenny and Sunny started their romance. Perhaps they frolicked down the streets of Singapore together, discovering the hidden alleyways and enjoying some ice cream together. Maybe they even went for a sunset stroll down the beaches of Sentosa, caught sight of a dolphin or two and gushed together.

We don’t know if they did any of that, but what we DO know is that in August 1963, Sunny took his girlfriend out for a romantic scuba diving trip which Jenny never returned from.

You are probably thinking that Sunny Ang would be going out of his mind looking for her. Going to the police, gathering neighbours and friends to canvass Singapore for her. Putting up posters of her and hiring private detectives to do some sleuthing. Exhausting every avenue he could possibly think of.

But according to a key eyewitness, Sunny Ang did nothing. He did not even panic. Basically, he did not act in a way that one would normally act upon realising that the person they were going to marry has vanished into thin air.

With this, in April 1965, Sunny Ang’s trial for the murder of his girlfriend begin...without a body. Now that we have your undivided attention, let’s sink our teeth into how Sunny was charged by the police even though Jenny disappeared. To do this, we need to take a few steps back.

It all started with a nice day out at sea

Remember when we told you to hang out to the little nugget of information that Sunny was an experienced scuba diver? Well, that was how he orchestrated the disappearance and, quite possibly, murder of Jenny.

We won’t go into the minute details of how Sunny orchestrated Jenny’s disappearance but in a nutshell, this was what happened:

Now, at this point you might be thinking that it is insane to charge someone for murder just because he wasn’t acting worried enough.

But here’s the thing - the prosecution built a case against Sunny Ang that was filled with so many relevant facts that, when it was looked together as a whole, it convinced the jury enough to find Sunny guilty of murder. He was hanged on the 6th of February 1967 after two hours of deliberation by the jury.

“This is an unusual case insofar as Singapore, or for that matter Malaysia, is concerned. This is the first case of its kind to be tried in our courts that there is no body.” – Prosecutor Francis Seow, with The Straits Times, Singapore

So Sunny Ang was convicted and hanged despite the lack of a body, and any other kind of direct evidence. So what evidence was so compelling to convince the jury?

Sunny Ang left behind a longgggg trail of indirect evidence

At the time of her disappearance, Jenny had about $400,000 worth of accident coverage taken out for her by her boyfriend. The odd thing about this is why would a simple waitress, who earned about $90 a month, have that much coverage?

So maybe Sunny could be seen as an overprotective, if not, slightly paranoid boyfriend by taking out such a large insurance coverage on Jenny; but Sunny approached the insurance company the day after Jenny disappeared and proceeded to file a claim for her insurance. Aside from that, just two weeks before her disappearance, Sunny accompanied Jenny to draw up her will that named Sunny’s mother as her sole beneficiary. If you are still unconvinced, one of the policies amounting to $150,000 lapsed a day before the dive and Sunny renewed it for only five days. This means that if Jenny had died after the five days, there would be no insurance to claim from.

Aside from the irregular insurance purchases and beneficiaries, another nail in Sunny’s proverbial coffin was the discovery of one of Jenny’s flippers. She disappeared on the 27th of August and the flipper was found on the 3rd of September, not far from where she disappeared. The funny thing is, the heel strap of the flipper was cleanly severed. Two expert witnesses testified that the flipper was severed by 2 clean cuts, which could have only been done by a sharp instrument such as a knife and not by jagged corals (because the cuts wouldn’t be clean then). The witnesses also mentioned that a novice diver such as Jenny would have panicked in such a situation due to the impairment in her mobility and inadvertently, she would have drowned.

Another strange thing is that there was speculation that there may have been another attempt on Jenny’s life before this diving incident. Sunny had borrowed a friend’s car to make a trip down to good ole’ KL. Before making the return trip, he had purchased accident policies; $30,000 for himself and $100,000 for Jenny. Seems like a lot of money to blow on a simple trip from KL-Singapore, right?

Well, the car crashed on the way back. Sunny, who was a skilled driver (novice race car driver, remember?), claimed that he crashed the car trying to avoid a dog. The worst damage was on the passenger side, where Jenny was. However, she managed to escape with just bruises.

This was how Sunny was convicted without Jenny’s body ever being found. Through a series of relevant facts. But what exactly is a relevant fact and why is a body so important in a murder case? Let’s stroll into the law of evidence for this discussion.

Real evidence is much more complicated than TV shows

This is where we look at section 5 of the Evidence Act 1950:

“Evidence may be given in any suit or proceeding of the existence or non-existence of every fact in issue and of such other facts as are hereinafter declared to be relevant, and of no others.”

The language of the Act is very twisty but what it basically says is that there are two kinds of evidences that can be admitted to court. The first is called a fact in issue and the second is called a relevant fact.

Evidence law is very very very technical but in essence, facts in issue are evidences that directly show the judge that the crime was committed by the accused. The judge does not have to infer or presume anything from a fact in issue.

A relevant fact, on the other hand, is the evidence that does not directly show the judge that the crime was committed by the accused. Relevant facts can help prove the facts in issue for a case.

To make it easier for you guys to understand, here is an example illustrating how facts in issues and relevant facts work.

A drives to meet B in Banting. B then murders A using a knife and burns the body. Without B realising it, C has witnessed the entire crime.

In the scenario above, there are two crucial bits of evidence. The first is the testimony of C, the witness and the second is the knife.

C’s testimony would the fact in issue. Because it directly tells the judge what happened.

Because that is how Sunny Ang affected us

In other words, it is the first murder without a body that the court has to deal with since Jenny’s disappearance.

To go over the case briefly, Datuk Sosilawati and her three companions were murdered by her lawyer, N. Pathmanabhan. He then burnt the bodies completely in order to avoid detection. He was charged and convicted for their murders through purely circumstantial evidence.

So, this means that a murder that happened in Singapore in 1963 has managed to traverse time and distance and...landed itself in Kuala Lumpur in March 2017 when the Federal Court upheld the murder conviction for N. Pathmanabhan and two others.

This is how a case from a long time ago and from another country could affect our laws and judicial decisions. As a matter of fact, a multitude of our laws still share many similarities with the UK and other Commonwealth countries. Judges in Malaysia can also choose to look at decisions from the UK as persuasive precedents when deciding cases in Malaysia. Above all, it would appear that tons of mistaken beliefs about the law exist out there.

If you have read previous AskLegal articles, you would have noticed that we sometimes reference old English cases. This isn’t meant to show off our awesome English history skills, but rather, it’s because these old cases are still used as the basis for Malaysian court judgments today.