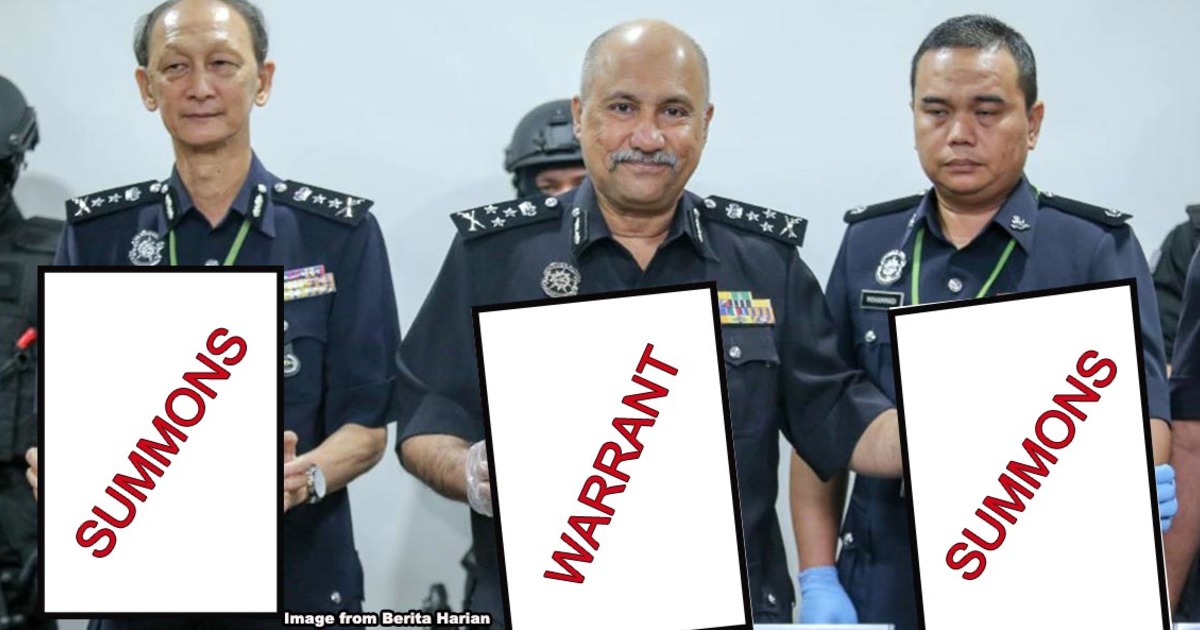 What is the difference between a summons and a warrant in Malaysia?

Malaysians are very familiar with the concept of summons or as we call it, “saman”. We usually get it for traffic offences such as speeding or the favourite Malaysian past time, cutting into lanes without adhering to proper etiquettes of safe driving. For us, summons usually relate to minor offences and typically, we pay them (or don’t even pay them) and forget about it.

On the other hand, we are also somewhat familiar with warrants of arrests which we usually think are reserved for serious crimes. When we think of arrest warrants, our mind conjures up dramatic scenes of car chases or maybe police officers decked out in Kevlar vests, pounding on someone’s door before going, “We have a warrant to arrest you, Dr. Doom.”

But are there more differences between summons and warrants other than in the way they are typically used? Well, the starting point is…

Summons and warrants have the same purpose

Both summons and warrants are processes which are issued by the court in order to compel your attendance in court. In other words, the courts can issue summons or warrants if they want you to go to court. Both summons and arrests are issued in accordance with either the Courts of Judicature Act 1964 or the Subordinate Courts Act 1948.

Section 34 and section 38 of the Criminal Procedure Code (“CPC”) tells you how summons and warrants are supposed to be like. They both have to be:

In addition to that, summons will usually be served by a police officer but the court which issues you the summons can order another person to serve it on you if they think that it would be necessary to.

“Such summons shall ordinarily be served by a police officer but the Court issuing the summons may if it sees fit direct it to be served by any other person.”

Ignore a summons and it turns into a warrant

Remember how summons are used to make you go to court? Since it is meant to ensure your attendance in court, there is actually a proper way for summonses to be served. First off, the original copy of the summons should be given to you personally. You might also be required to sign an acknowledgement, stating that you have received the summons, on the back of the original copy.

However, if you have any ideas about disappearing or hiding around a corner so that the police officer can’t pass the summons to you, you might want to scrap that plan.

This is because section 35(4) CPC allows for the police officer (or anyone else empowered by the court) to serve you the summons by leaving it with an adult family member or a servant that lives with you.

Aside from that, if the police officer fails to find any family members or servants, he can then simply leave the summons at a conspicuous part of your house or at any place that you would normally be at if the court orders it. This is why you usually come back from your delicious serving of nasi lemak and stagger from shock (maybe from heartburn too) when you see that white piece of paper fluttering from your windscreen wipers.

When the person to be summoned cannot by the exercise of due diligence be found and service cannot be effected as directed by subsection 35(4) the serving officer shall affix a copy of the summons to some conspicuous part of the house or other place in which the person summoned ordinarily resides, and in such case the summons, if the Court so directs either before or after such affixing, shall be deemed to have been duly served.

But wait. Why are the police supposed to try leaving the summons with a family member or, failing that, to leave it at a house when the only type of summonses that can be issued are traffic summons?

Well, summonses are not just for traffic offences. They can be used for a plethora of reasons such as requiring you to go to court to be a witness.

Okay but we all know that it is okay to ignore a summons, right? We all do that so much that it might even be immortalised as a favourite Malaysian past time. However, if you have ever received a summons, you would notice that the bottom part of it states the date, time, and which court you are supposed to appear at. If you fail to show up in court that day, the judge can actually issue a warrant of arrest for you.

In a simplest form of explaining it, summonses are like the nice way for the court to ask you to show up. If you ignore the good cop way, the bad cop way comes in through the form of a warrant of arrest. This is found in section 47 CPC which states that a criminal court can issue you with a warrant of arrest if:

Some of you would probably be rushing to dig up the wadded up copies of summons you tossed in a corner of your room but before you do, let’s talk about warrants.

Once the judge issues a warrant for your arrest, you can’t dodge it because according to section 38(2) CPC, the warrant will remain in force until the court which issues it, cancels it or if it has been executed (means that you have been arrested). Staying/remaining in force means that the police can use that warrant to arrest you even if it is a year later.

So, the question then is, who can execute warrants? We all know that the police are in charge of arresting misbehaving citizens but section 40(2) CPC also allows the court who issues the warrant to empower other people to arrest you. The only proviso is that the court must name these non-police officers specifically by name:

“The Court issuing a warrant may direct it to any person or persons by name not being police officers and all or any one or more of such persons may execute the same.”

Upon getting arrested, you must be brought to the court that issued the warrant for your arrest without any unnecessary delays (section 42).

However, the police are allowed to not bring you to court in one specific scenario…

If you give the police money, they won’t arrest you

No. This is not giving them a bribe.

Under section 39 of the CPC, when the court issues the warrant, they can include a part that states that if you pay the arresting officer, you can avoid getting arrested. Before we delve into the nitty gritty parts of the section, here is what it says:

Any Court issuing a warrant for the arrest of any person may, in its discretion, direct by indorsement or footnote on the warrant that if that person execute a bond with sufficient sureties for his attendance before the Court at a specified time and thereafter until otherwise directed by the Court, the officer to whom the warrant is directed shall take such security and shall release that person from custody.

A surety bond is where another person (the surety) guarantees the court that you would perform your obligations under the warrant (show up in court at the specified time).

This surety bond does not automatically apply for every warrant of arrest that is issued in Malaysia. You can only rely on a surety bond if the court, when issuing the warrant, states the number of sureties that is required, the amount of security (money) that you and the surety would have to pay, and when you are supposed to show up in court.

If you manage to find the necessary number of sureties and pay the needed security, the police would have to release you from their custody. This means that should you fail to appear in court after signing the bond, you would be in breach of your bond and the courts can issue another warrant for your arrest (section 50).

There are actually a lot more procedures on how the security for a bond is to be set and what happens if you fail to show up in court because of an unavoidable emergency but that will be dealt with in a separate article.

For now, just know that it never pays to ignore an official document from the authorities. Even if you think that traffic summonses are a small problem, you can still receive an arrest warrant for not showing up in court or at the very least, you would have to pay a bigger fine. Besides, since summonses are used for anything that requires you to attend court, you might never know when you would be a key witness in preventing an innocent man from going to jail.