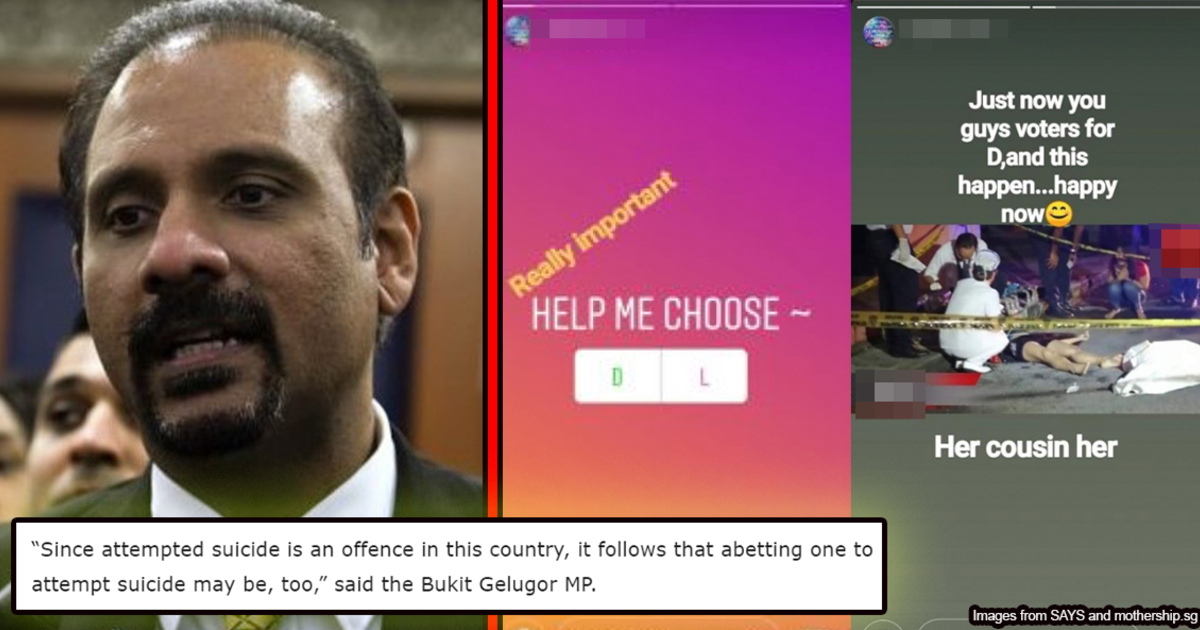 Encouraging someone to commit suicide is a crime in Malaysia....even by Instagram poll

On May 13th 2019, a teenager committed suicide by jumping off the 3rd floor of a shop lot. Her death made global headlines because she had run a poll on Instagram asking her followers whether she should “L” or “D” which presumably stood for “live” and “die”. It was reported that 69% voted for “D”.

Many who read the news were naturally angry and shocked, and this news also got the attention of our lawmakers. Ramkarpal Singh, a lawyer and Bukit Gelugor’s MP has said that those who voted for the girl to die should be held responsible. But is encouraging someone to commit suicide actually illegal in Malaysia? The upfront answer is that it’s possible because...

Suicide itself is a crime in Malaysia

A person who has already committed suicide obviously cannot be punished, so this law was enacted for people who attempted suicide, but survived it. Malaysia’s laws on suicide can be found in the Penal Code. Section 309 of the Penal Code states:

Whoever attempts to commit suicide, and does any act towards the commission of such offence, shall be punished with imprisonment for a term which may extend to one year or with fine or with both.
If a person has survived a suicide attempt, he or she will be sent to the hospital if needed, but once they recover, they’ll have to face trial in court. If found guilty, they may be sent for counselling and therapy and possibly given a jail sentence.
While several Ministers have asked for this law to be removed, at the time of writing, the law is still in effect.

Encouraging someone to commit suicide is also a crime

There are many instances where you can be considered an accomplice or accessory to a crime even though you didn’t help to commit it. For instance if someone were to tell his friend how to murder his wife, he would be an accomplice to the murder even though he didn’t kill his friend’s wife. Similarly, for suicide, there is an actual law directly stating that it’s a crime to encourage someone to kill themselves.

So, when Ramkarpal Singh said that he wanted those who voted for the girl to die to be held responsible, he wasn’t just simply saying it out of anger, because there actually IS a law for it.

What may seem harmless, can be deadly

In many countries, such as the UK, New Zealand, Australia and Ireland, attempting suicide is not a crime, however, encouraging or assisting someone to commit suicide is.

An example would be the case of an Australian named Graham Morant who had encouraged his wife, Jennifer to commit suicide. He had even taken her to a hardware store to purchase the items she later used to take her own life. Graham was charged with two crimes and sentenced to 10 years in jail. This was under Section 311 of Queensland’s Criminal Code Act 1889: encouraging someone to commit suicide and also aiding/assisting them to do so.

The only difference between these countries and Malaysia is that in Malaysia, suicide attempts themselves are criminal acts. But in each case, no matter which country, the judge won’t immediately slap a jail sentence and fine on someone who is found guilty. The circumstances and facts of the matter will be the deciding factor for the sentence given.

As social media users, we have to remind ourselves that behind accounts that post suicidal thoughts or messages, there are human beings like ourselves who have problems. If you come across such a message, it might be best to send them a message asking if they’re okay. In more serious cases like that of the Sarawakian girl, it’s best to inform the authorities as soon as you see it.

For those of you who are going through depression and need someone to talk to, feel free to reach out to Befrienders at the numbers below: