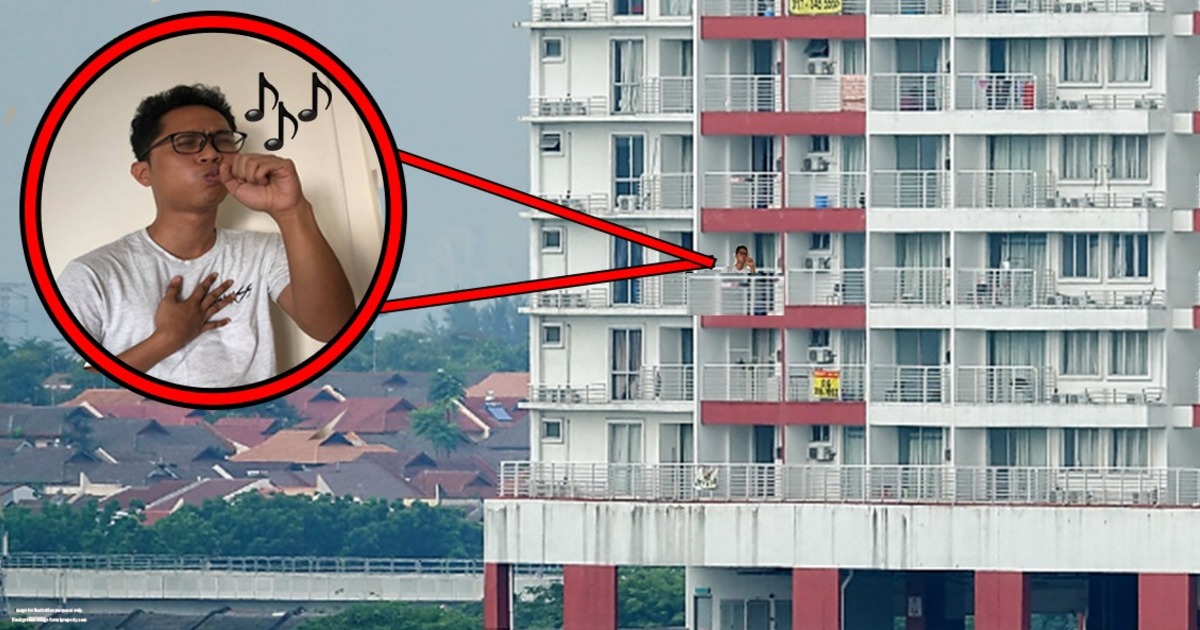 Staying home for almost two weeks now might have made us get creative to kill boredom and fill all that time we have. Some might take this positively, and catch up on everything they’ve been wanting to do from the comfort of their homes. But there are also others (this writer included) who are being cooped indoors far too long...and do not remember what daylight looks like.

Now whether we like it or not, the government has enforced the Movement Command Order (MCO) which has now been extended until the 14th April 2020. This was decided due to the high number of COVID-19 infection cases across Malaysia—which is continuously spreading. Now since we can’t hangout with our friends and have mass gatherings, some Malaysians decided to get creative during this partial lockdown, by holding balcony karaoke sessions from their apartment units. If you haven’t seen the viral video that mirrored Italians singing from their balconies during the COVID-19 lockdown—you can watch it here.

Now we don’t want to be a killjoy, but the last thing we want is for PDRM to come knocking on someone’s front door, asking them to stop singing. So the question we have at hand is: Is it legal for Malaysians to sing from our balconies during the MCO?

Your karaoke sessions can be a nuisance to your neighbours

Sometimes, we might annoy our neighbours by doing certain things they may not like. Some of this include making noise, cooking something that smells foul or even letting your pet out to destroy your neighbour’s little garden.

Now if it happens once in a while and isn’t significant enough to be complained about, your neighbour may choose not to make a big deal out of it. However, if the annoyance happens frequently and it bothers your neighbour’s daily life, then you might be committing a tort of private nuisance.

Nuisance is a legal term which means you’re interfering with your neighbour’s enjoyment in his property and it causes him some form of harm. There are 2 types of nuisances: private and public nuisance. For the purposes of this article, we are only looking at private nuisance, which occurs when someone does something which interferes with your right to enjoy your property—in other words, living in peace.

To win an argument in court for a case of nuisance, your neighbour must be able to show that your balcony karaoke session (in this situation) is unreasonable, and is interfering with your neighbour’s enjoyment of his property.

Now it obviously isn’t a crime to sing from your balcony with other neighbours. However, if it is done in a certain way or at a certain time, this can amount to nuisance—where your neighbour who hates your singing can report against you.

But even this can depend on what kind of a balcony you’ve been singing from...

If you live in a condo, there are different laws

Since most of these karaoke sessions have happened in apartments and condos, we’ll be focusing on strata properties in this article. If you live in a strata property—such as, high rise apartments/ flats/ condominiums/certain gated and guarded landed properties—you’ll be bound by laws and regulations set out in the Strata Management (Maintenance & Management) Regulations 2015. In some cases your tenancy contract/housing contract— either the Deed of Mutual Covenants and Sales and Purchase Agreement will also spell out the ‘house rules’ that residents must follow.

For most strata properties, there would normally be a joint management body, where residents can raise issues and make complaints. The management body basically has the authority to enforce by-laws to prohibit residents from creating nuisance.

[READ MORE: 4 things your condo management can sue you for in Malaysia]

So if your neighbour who doesn’t like your singing complains to the management body, they can take action against you by giving you a fine—instead of bringing in lawyers or going to court.

But for your neighbour to be successful with his nuisance claim against your singing, he needs to prove the following elements in his case:

If your neighbour can prove these three elements happened because of your balcony karaoke session, they might be able to sue you for money. But here’s another important thing the law says about nuisance: The interference must be a result of a continuous action, instead of a one-off incident.

So if you and your other neighbours only had one karaoke session, there isn’t much your sulky neighbour can complain about. But if this has happened more than once, certain measures can be taken against those who created the nuisance.

Now what if the tables turn and YOU ARE that sulky neighbour!

At the end of the day, it’s not just the law that stands but it’s also the sense of community that neighbours should have with each other. For the most part there should be some sense of give and take, especially during an unexpected time like this—where we’re all going to have to stay at home for almost a month.

So before you go off to complain about your neighbours’ and their karaoke sessions, perhaps it might help to amicably talk things through with them first.

However, if you’re unable to convince them to stop their balcony karaoke sessions (assuming it happens regularly at odd hours), you can always lodge a complaint with the management body or with the local authorities (ie Majlis Bandaraya/ Majlis Perbandaran).

If you’ve used up all diplomatic avenues, then of course there’s always the courts to resort to. But remember to collect enough evidence as you really need to prove nuisance to make your case! Ultimately, the courts will decide if something your neighbour created nuisance, based on the facts and circumstances.