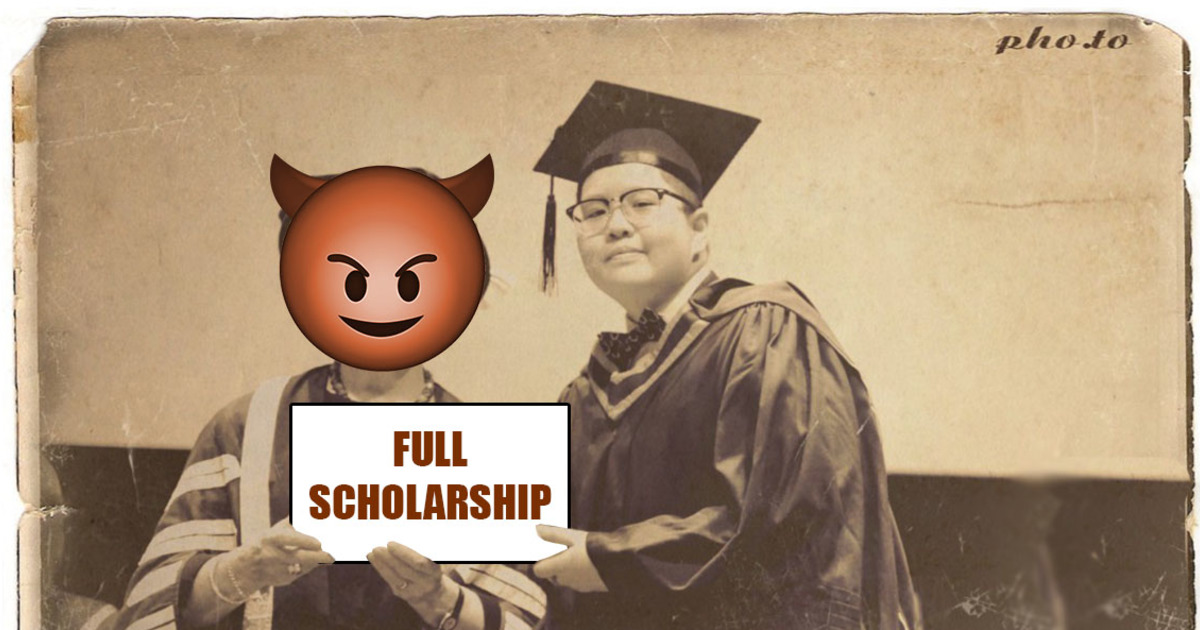 In the 1960's, this Malaysian scholarship student found a loophole to escape his bond...

Let’s start with a sad fact of life – nothing comes free (except your mama doing your laundry). For example, if you are a student who took a PTPTN loan, you would be required to pay it back. On the flip side, lucky kids who snagged a scholarship would usually be required to work x number of years with the company/body/government who gave you that scholarship in order to pay them back. This is known as a bond.

While job safety is a great thing to have in this economical climate, sometimes the bond might be restraining us from greener pastures so we find ways to break the bond but can’t seem to ever find a loophole out of it.

One guy found an epic loophole

Let’s first take you guys back to the heyday of P. Ramlee movies and coincidentally, the time a young Malaysian was sent off to complete his education, courtesy of the Malaysian government.

Back in the 60s, a young fella by the name of Gurcharan Singh was given a scholarship contract by our government. The terms of the contract was that in return of the government sending young Gurcharan to be trained in the Malayan Teachers’ Training Institution, he would return and work for the government for 5 years. We would like to highlight that the judgment did not mention Gurcharan’s age but from the arguments presented, we deduced that he was a minor at the time of signing the contract with the government.

Gurcharan ended up being sent to England for his training (hang on to this nugget, it is important later on) and upon his return, he served the government for 3 years 10 months before resigning. This meant that there was a balance of 1 year 2 months which was unserved, contrary to their initial agreement. The government then sued Gurcharan for $11,500 for his training. The $ sign is used because our dear old RM didn’t come into existence until 1993.

In his defence, Gurcharan argued that firstly, the contract entered into between him and the government was void on the basis that he was still a minor at the time of contracting. In the alternative, he also argued that in the event the contract is valid, the claim for $11,500 was excessive because he had served the government a substantial portion of what was agreed on.

A minor is basically legal speak for children and the age of majority (adult) is above 18 years old in Malaysia through the Age of Majority Act 1971.

If you are brushing this off as a “the court will always side with the government”, we have news for you…

He actually won that argument

To give some background before we delve into this rather ingenious argument, the law recognises that parties are free to contract for whatever it is in howsoever a way. With this being said, there are certain things that are illegal to contract for example, if you enter into a contract to murder someone, that contract would be void. Other examples include contracting for something that is impossible to perform or contracting with those who are mentally incapable of entering into contracts.

Section 11 basically means that children are not competent to contract. Any contract entered into with a child is automatically void i.e the law will not recognise its existence.

We know that the penny is furiously dropping for all you guys out there who are struggling with student loans and/or bonds but before we all get too excited and tell the gomen to suck it, let’s take a look at what happened in that court case because, while he may have won that argument...

He lost another argument

Aside from the argument given above, there was actually another point for the judges to consider. The argument here is that the scholarship contract is a contract to provide necessaries for a minor.

To explain this argument, let’s take a look at section 69 of the CA:

“If a person, incapable of entering into a contract, or anyone whom he is legally bound to support, is supplied by another person with necessaries suited to his condition in life, the person who has furnished such supplies is entitled to be reimbursed from the property of such incapable person.”

The general rule is that any contract made with minors is void but an exception to this rule is when the contract is to provide the minor with necessaries. What is defined as a necessary depends on the situation. Food would definitely be necessary but a fancy waistcoat might not be. In reference to an old English case of Chapple v Cooper, the judge saw fit to define education as a necessity.

Therefore, when the government argued that the scholarship contract is one to provide necessities, the judge agreed with them. However, the battle is not over yet because Gurcharan argued that while education may be a necessity, sending him to England was excessive.

Remember how we told you that the contract was entered into to send Gurcharan to the Malayan Teachers’ Training Institute but he was sent to England instead? This was the basis for him arguing that the action was excessive because he could have been similarly educated locally. However, the judge disagreed and said this:

“In this connection, I am of the considered opinion that the decision to send the infant to England and not to a local training institute does not, per se, take the provision out of the class of necessaries. The decision that was taken was - undoubtedly made on a variety of factors, for example, availability and suitability and in the absence of any evidence that pearl or diamond buttons were supplied, I find myself unable to accept the contention of learned Counsel for the defence.” – Justice Chang Min Tat, High Court Ipoh [emphasis added]

There were more technical arguments that were considered such as how the liability wasn’t contractual based but based on statute through section 69 and the courts also considered the liabilities of Gurcharan’s sureties but to avoid confusion, we will stick to the bare bones of it.

So in a tumultuous turn of events, the government won the case but they were not awarded the full amount they claimed because the courts reasoned that as Gurcharan had already spent about 3 years working for them, the government could only get back an equivalent portion of what they had spent on educating him (about $2,300).

If some of you guys are reading this and thinking that you could cheat the system better, we hate to bring you more bad news because…

The law is now different

Specifically, new amendments were added to the Contracts Act through the Contracts (Amendment) Act 1976 where section 4 provides that:

“Notwithstanding anything to the contrary contained in the principal Act, no scholarship agreement shall be invalidated on the ground that-

(a)the scholar entering into such agreement is not of the age of majority...”

This means that you can no longer use the argument of being an “infant” to avoid performing your end of the contract for scholarships. In addition, section 5 also sets out the exact amount that you would be liable for in the event you breach the contract.

Well, folks. At the end of the day, if you budding scholars want to use this argument, we’re sorry to tell you that the scholar ship has sailed.