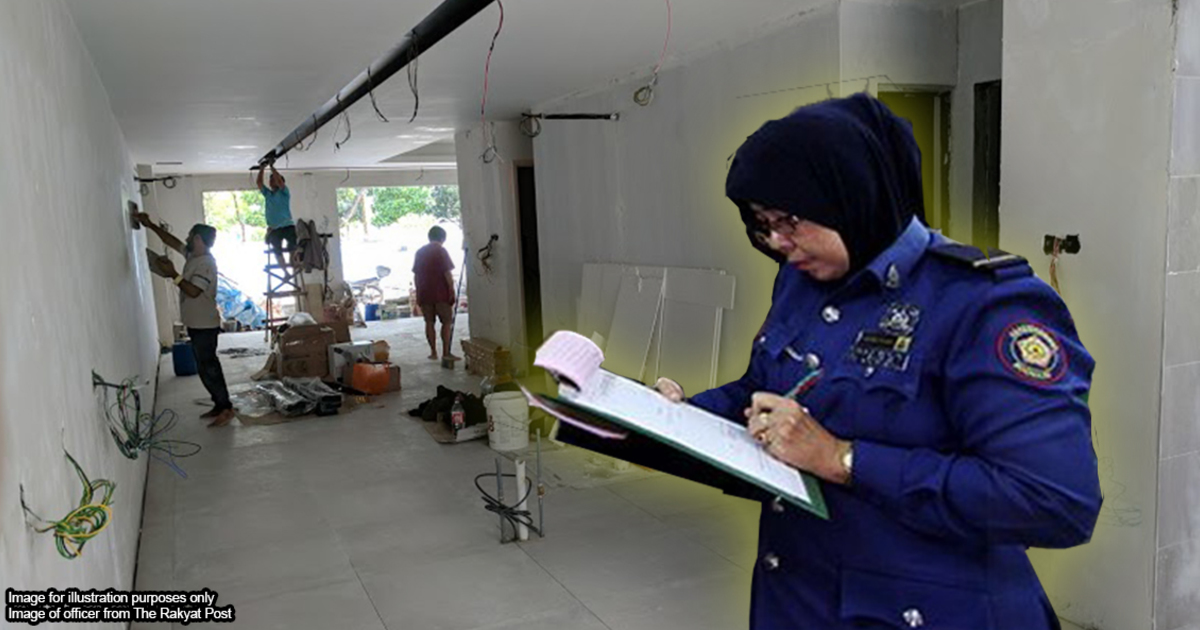 Certain home renovations in Malaysia may not require permits. Here's why

Be it building a wall, redoing the tiles or extending our porch, almost all of us would have had our homes renovated at some point in time. It seems like a pretty simple and straightforward thing, but did you know that renovating a house has laws that govern it, too? While it is very common, renovating means that you will be altering some part of your house and this will:

For this reason, a part of the Street, Drainage and Building Act 1974 lays down the laws on what’s allowed and what’s not when it comes to renovations. There’s a process to be followed before you start renovation works in your home and failing to follow that process might result in:

So if you were to start renovation works on your home without going by the set rules… don’t be surprised if someone from your Majlis Perbandaran comes knocking on your door because...

You may need a permit to start renovating

The very first part of the process would be obtaining a permit from your Majlis Perbandaran. To clarify, not all renovations require permits but we will explain that in detail below. But let’s talk about why a permit is needed in the first place.

You may think, it’s my house and my land, so why do I need to follow specific laws for it? While you may own your piece of land, the land that is around your house may belong to your neighbour or even the Majlis Perbandaran itself. This can be determined in the grant of a land where the clear boundaries of a piece of a land are already stated.

So a permit is mostly needed for two things:

1. To ensure that you don’t build on someone else’s land

As mentioned above, some of the land around your house may belong to someone else. You share a boundary with your neighbour and if you happen to for example, build a wall that extends into their compound, that would make your renovation illegal.

Land that is outside your compound belongs to the Majlis Perbandaran. And this includes the roads, pavements and even the ground on which trees outside your compound may grow. So if you want to widen your veranda and it extends onto the main road, you would be building on the town council’s land, which is also illegal.

To prevent this from happening, a permit has to be issued to confirm that you are only building or renovating on your land.

2. To make sure that safety standards are met

This goes without saying. But permits are also needed to ensure that whatever renovation is done will not be a hazard to anyone in the area. Illegal renovations that are poorly done can cause injuries or even death to anyone in the area. This is why the proposal of the renovation that you give to your Majlis must have a detailed description of who the renovator is and what exactly he plans to do. If a particular design is dangerous, the Majlis will reject your permit.

It all depends on what kind of property you live in

To make this simpler, we’re going to break this part down into strata-titled properties (condos and apartments) and landed properties.

If you live in a condo/apartment, you’ll have to get a letter of authorization from your property management. The management has the right to reject your application if it doesn’t meet the guidelines set by the management. This is subjective because it depends on what kind of rules your condo/apartment has set for renovations. In most places, you’ll have to pay a deposit to the management which will be refunded after the renovation, provided no part of the property was damaged in the process.

Stricter laws apply to landed properties because in these cases, the Majlis Perbandaran of each town is involved. For landed properties, you will need to draw up a plan of your proposed renovation and submit it with a specific fee to the Majlis. Again, the Majlis can reject the proposal if it doesn’t meet specific guidelines.

Some very minor renovations don’t require permits, but because there’s no specific list as to what requires permits or authorizations, it’s best to check with your  Majlis before proceeding with anything. If there’s no permit needed, then you’re good to go. But if you’re told that a permit is required, it’s best for you to submit a plan of your renovation together with the fee so that you don’t get in trouble later.

Majlis can “undo” your renovation

Each town council has different laws with regard to renovations, which is why it’s always best to check with your local town council before starting on any work. While their basic guidelines might generally be the same, certain things like fees, fines and grace periods are usually different.

Your Majlis Perbandaran has the right to demolish or break any renovation that is illegal or was done without their permission. As mentioned above, you are not allowed to build on another person’s land. So, if your neighbour complains that part of your new wall has actually been built on their land, the Majlis has the right to ask you to tear it down if your neighbour’s claims are proven to be true. If the Majlis does the demolishing work for you, they will pay for the cost of that first, and you will have to reimburse them later.

But in the event that the Majlis forced you to stop renovation or tore down what you already built, BUT you actually had a valid and legal permit to renovate (and it was mistakenly thought that you didn’t)… then the Majlis is supposed to compensate you.

Section 33 of the Street, Drainage and Building Act 1974, sub section 5:
Local authority to pay if erection lawful (5) If such projection, encroachment or obstruction has been lawfully made, the local authority shall pay the expenses of the removal or alteration thereof and make reasonable compensation to every person who suffers damage by such removal or alteration and, if any dispute arises touching the amount of such compensation, the same shall be ascertained in the manner hereinafter provided.

So basically, if your renovation was perfectly legal but the Majlis had made an error and said it wasn’t, and that caused your renovation works to be undone or halted, you must be paid back for your losses.

But what if some town council officers show up at your place and you tell them...

“But I didn’t even know it was illegal!”…

Well… you wouldn’t automatically get in trouble. The majority of the cases of illegal renovations are people who had bought homes that had already been renovated by previous owners. If you genuinely had no idea that the extension of your balcony that was done years ago was done without a permit, you wouldn’t automatically be slapped with a hefty fine. Your Majlis Perbandaran will most likely give you time to apply for a permit, provided the balcony meets the safety standards set by them.

For example, in 2016, Majlis Perbandaran Subang Jaya came up with a way for homeowners to “legalize” their home renovations retrospectively. Which means, homeowners who had previously done renovations to their homes without permits could now obtain permits to make their renovations perfectly legal. This also applied to people who had bought homes they didn’t know were illegally renovated. And they wouldn’t be fined for this even though technically, they had breached the law before this.

However, at the end of 2018, MPSJ ended the scheme and anyone who had applied after that would be fined. The scheme had positive responses due to the fact that there were a large number of people who had done illegal renovations to their homes and they now could remedy the issue. This also helped people who wanted to sell their homes, as the next buyer wouldn’t have to worry about having to pay a fine for something they didn’t do.

If you end up buying a home from a previous owner, it’s best to check that everything is legal, if there have been any renovations done to the house. Also, make sure to obtain any certificates or permits from the previous owners to keep as proof, just in case the need arises for you to produce them to the authorities.