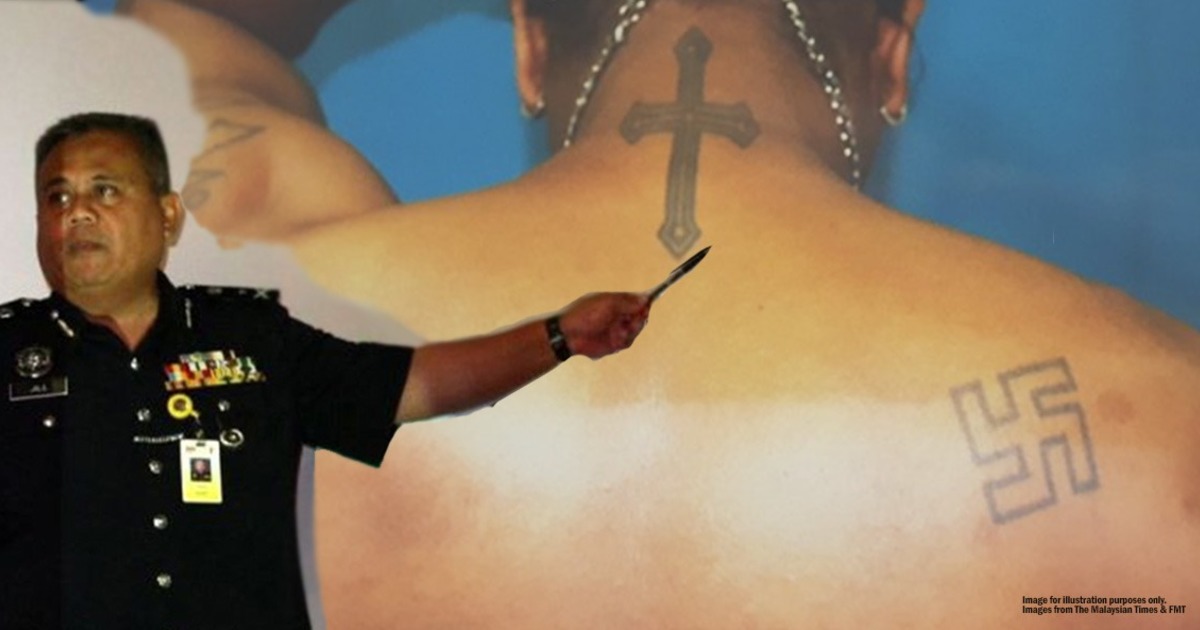 We asked PDRM if they're arresting everyone with a gang tattoo. Here's what they said

Last year, PDRM made a statement that people who have certain tattoos will be arrested—as it might represent illegal gangs in the country. Not just that, there’ll be a punishment of up to 3 years in prison, or up to RM5,000 in fines if found guilty.

Recently, a bookseller from Penang was arrested (and later released) for having a swastika tattoo (卍) on his back. Many people still view tattoos as a sign of trouble or gang affiliation, but the judge in this case said that there are other things the police will look into, before arresting someone for a tattoo.

So if you happen to have a particularly fierce dragon tattoo or worse—a tattoo that coincidentally looks like a gang symbol (more on this later)—will you actually be putting yourself at a risk of being arrested?

Now before you limit your next tattoo choice to Pokemon or derpy Freddy Mercury, you should know that…

There is a specific criteria for “gang tattoos”.

Let’s clarify two things first. Firstly, a gang tattoo is meant to show allegiance or identify your association to a particular gang… kinda like how you would wear a Manchester United jersey to signify that you’re a MU fan. This means that it’s something that is specific and should be distinguishable from regular tattoos.

Secondly, the law that applies to gangs in this context is the Societies Act 1966, as a gang can be considered a society (kinda like a group or club). The Societies Act considers a gang to be an unlawful society, which also makes being a member of a gang illegal.

Section 43 of the Act states:

“Any person who is or acts as a member of an unlawful society...shall be guilty of an offence and shall be liable, on conviction, to imprisonment for a term not exceeding three years or to a fine not exceeding five thousand ringgit or to both.”

This means that if you have any connection with a gang, you’ll be liable under this Section and can be imprisoned not up to 3 years or a fine not more than RM 5,000. There has been a case where 3 men with heavy tattoos were arrested under this Section for alleged membership with an unlawful society in Kedah.

It’s not just tattoos as well. You can also get in trouble if you’re caught with materials (like flags, banners, or badges) that contain gang symbols under Section 50(3) of the Act:

(3) Any person or society who displays any flag, symbol, emblem, badge or other insignia which has not been approved by the Registrar...shall be guilty of an offence and shall be liable, on conviction, to imprisonment for a term not exceeding three months or to a fine not exceeding *three thousand ringgit.

So, how would you know what gang symbols look like? Here are some examples of gang symbols that have been shared by the police:

In case you were wondering, the police can actually conduct a body search if they have reason to suspect that you’re up to no good. Unfortunately, this also means that the officer can check your tattoos if they happen to resemble a gang symbol. But don’t worry, you’ll likely not be getting into trouble because...

The PDRM will investigate before they make an arrest

So what if you happened to come across a bad tattoo artist, made an unfortunate tattoo decision, or, simply by just pure coincidence, end up with a tattoo of two interlocking coins similar to the one for Gang 04 above? Does that mean you’ll be calling your lawyer from the lockup anytime soon?

We called the Dang Wangi District Police HQ and PDRM’s D-7 Vice and Secret Societies unit, and both told us that an investigation will have to be conducted before they actually make an arrest.

So if the police do suspect you for you tattoo, they’d conduct an investigation which basically includes taking down your details, investigating if you have any connections to these gangs, and only making an arrest if you have actual connections or links to the gang.

If you’re cleared, you’ll be good to go (to make a cover-up tattoo appointment).