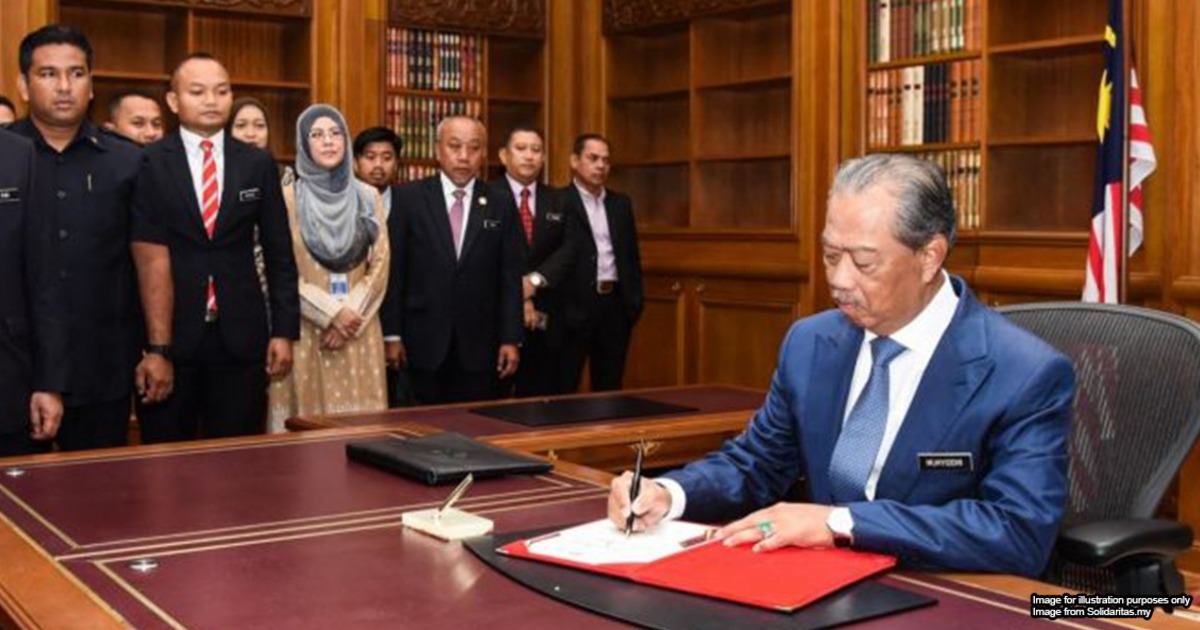 9 months ago Mikaela A

This has come into effect since a circular was released on June 3rd 2021, after the Attorney General’s Chambers advised that only the Prime Minister’s official name should be used.

Just this past year, we’ve seen countless regulations, declarations and orders come into effect. For it to become legal and effective, the relevant Minister will sign off on it. So if it was an order to do with public health, it’s the Minister of Health who will sign it.

Because these regulations, declarations and orders are considered to be law, understandably, they would need to be signed using the Minister’s full and legal name. But recently, the Shah Alam High Court quashed a declaration order signed by the Prime Minister last year...because it wasn’t signed using his actual name.

A declaration by the PM was recently cancelled

For those of you who don’t already know this, the Prime Minister’s actual name, per his MyKad, is Mahiaddin Md Yasin. But for as long as most of us can remember, he’s gone by Muhyddin Yassin. Now this slight difference in name spelling may not seem like a huge issue, but a Malaysian man’s life was changed just because of this.

Last March, a man was detained under a preventive detention order that was signed by Muhyiddin. At that point, Muhyddin was the Home Minster and not the PM yet (this is not a key fact, but it’s just some additional info). The man in question was arrested on drug trafficking charges and under this detention order, he was going to be detained for two years.

But just last week, the court removed this order and this man has walked free, all because Muhyiddin didn’t sign it with his legal name—making the whole order invalid.

This is the first time something like this has happened, but it does raise the question: Does everything else that was signed as Muhyiddin and not Mahiaddin become automatically invalid?

Based on this case, on the surface it seems as if other orders like this could also be cancelled out. But...it’s not so straightforward. According to lawyer Fahri Azzat:

“It is not invalid until challenged.”

In essence, just because a Minister signed an order using another name, it doesn’t automatically make the order invalid. But if someone were to challenge the order in court and the court decided in their favour, then the order can be set aside. So while it won’t cancel out all orders like this, this does give people the right to fight their case in court if they found themselves affected by such an order.

It also depends on the nature of the declaration/order

The lawyers in the man’s case also said that the order was set aside because of how serious the issue was. In this case, the person’s liberty was at stake as he was going to be locked up for a long time. According to some lawyers, in cases like this, the courts can be very strict when looking at the fine print of the of the law.

“Technicality becomes important when a case involves a person’s liberty.”

In other words, a Menteri using an unofficial name to sign an order alone won’t be enough for you to win a case in court. You can still challenge it in court, of course, as that will always be your right. But if the order isn’t major enough that it would affect your liberty and life, there’s still a chance that the order might be retained.

While many have claimed that signing with an unofficial name is against the Ministerial Functions Act 1969, there is actually no such requirement under that law for the minister to use his legal name.

But again, this doesn’t mean that ministers can use any name they like when signing off laws. At the end of the day, if the court decides that the minister was wrong in doing so, the regulation/declaration/order can be done away with.