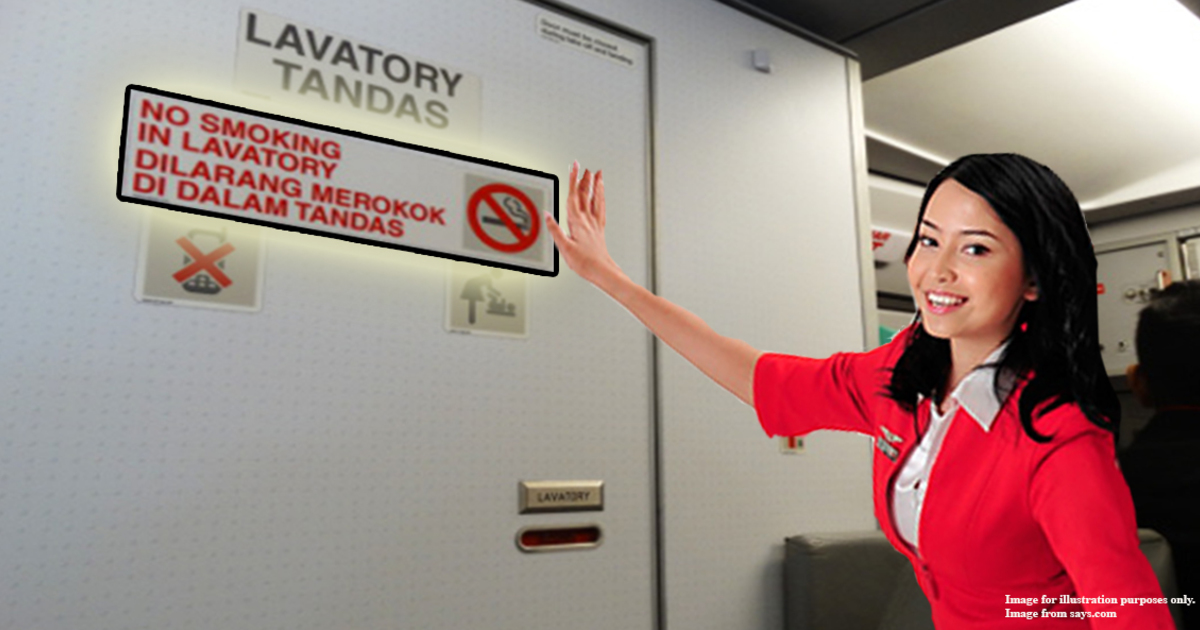 If you can't smoke in a plane, why do AirAsia flights still have ashtrays?

If you’re a frequent flyer, occasional flyer – or even if you’ve never been on flight before, you’d probably still be familiar with some of the basic rules to follow when boarding a plane. Some of it are as normal as wearing a seat belt during take-off and landing, not bringing certain types of food/beverages into the flight and...the no smoking on board rule. But before we go any further, take note that the no smoking rule does not just apply to AirAsia aircrafts, but to every other aircraft for both domestic and international destinations.

If you’ve been observant enough and have a knack for noticing details, you might have also seen ashtrays in the aircraft toilets. So, our curiosity led us to go on board and take off  to discuss on why flights have ashtrays in lavatories (toilets), when smoking itself is banned on an aircraft?

How did this ban come about?

This might sound crazy to some of you, but there was actually a time when people could smoke 35,000 feet up in the air! Well, you obviously can’t do this anymore, but it was pretty common back in the 50’s and 60’s.

So, if it was fine back in the day, why can’t we do it now? Perhaps this is best explained with a tragic story that happened in 1973. A flight from Rio de Janeiro to Paris had to make a crash landing because a fire started off mid air, because a cigarette was thrown in the rubbish bin in the toilet. 123 passengers died and only 11 people survived the crash.

This led to several international bodies pushing to stop in-flight smoking as it was not just hazardous to second-hand smokers, but it also poses a threat to cause fire on board. The smoking ban first came about 28 years ago, when the United States banned smoking on domestic flights. Malaysia on the other hand, was a little late to catch up with the rest of the world as we still had smokers up until 1999!

But a few years down the road, the smoking ban was finally implemented on almost every flight. So, if you’re wondering now, how come ashtrays are still part of an aircraft if the law states that it’s illegal to smoke on board in the first place?

The Federal Aviation Administration (FAA) from the US made a list of the minimum requirements of equipment for planes, which includes an ashtray, which is a legal requirement in every aircraft. But these regulations are only concerning American aircrafts, so how about our homegrown MAS and other planes that land in Malaysia?

We managed to get some input from the Malaysian Aviation Commission (MAVCOM) and were told that it is actually a legal requirement for all Malaysian airplanes to have an ashtray on board too. The law pertaining to this is stated under the Civil Aviation Regulations 2016, particularly under Section 100(1) and (2) as such:

(1) Smoking shall be prohibited in a Malaysian aircraft.
(2) For the purpose of subregulation (1), “smoking” includes smoking using a battery-powered portable electronic device such as e-cigarettes, e-cigs, e-cigars, e-pipes, personal vapourisers, electronic nicotine delivery system or any other similar devices.

Basically, the Act states that smoking in all forms, including e-cigarettes aka vaping is prohibited in a Malaysian aircraft. We also found out that the reason why ashtrays have to be part of a plane (it’s normally placed in the toilet or even by the seats) is because it acts as a safety precaution.

Let’s look at two scenarios to understand this better:

Scenario A: A passenger who is a chain smoker gets a strong urge to smoke while he’s traveling via flight. It is an 8-hour long journey from Kuala Lumpur to Sydney. He then decides to take a few puffs discreetly in the toilet. When he’s done, he realises that there’s no ashtrays provided in the aircraft and decides to dispose his smokey little secret by throwing the cigarette bud in the rubbish bin. Next thing you know, highly flammable things such as tissues catch fire due to the bud, and the plane is forced to make an emergency landing which is potentially a life or death experience.

Scenario B: Now imagine the smoker taking a quick smoke in the aircraft lavatory, and he stubs his cigarette in an ashtray that’s provided in the aircraft toilet. This can avoid the whole plane from blowing up or catching on fire, right?

So, ashtrays are there to prevent fires or mishaps from happening eventhough it is an offence to smoke in a flight. But there would always be that one person who wants to be badass and tries to break the law. Which might leave you wondering...

Does this mean you can still smoke in a plane...and get away with it?

It is pretty much established that smoking is highly prohibited on flights. So, if you were to still take a quick puff in the lavatory of the airplane and think that it’s okay as long as you’ve safely extinguished the fire in the ashtray provided...think again.

“(2) Any person who contravenes any provision specified in Part B of the Third Schedule commits an offence and shall on conviction be liable –
(a) where the person is an individual, to a fine not exceeding twenty-five thousand ringgit or to imprisonment for a term not exceeding one year or to both..”

Basically, the Act states that any person who commits the offence of smoking as specified under the Act shall be liable to a fine not more than RM25,000.00 or a jail term not exceeding one year, or both.

So, before you think it’s okay to smoke in a plane because your flight journey is going to take up to 13 hours and your body is already feeling the symptoms of nicotine withdrawals, you might want to think about the fine and jail sentence that comes along with the offence...which is definitely not worth the quick puff.

All in the name of safety

Some regulations are set by the Aviation authorities in order to avoid any tragedies from happening on flights. As much as ashtrays are provided to prevent people from causing a fire, it does not justify that smoking in a plane is okay. Second-hand smokers may be affected by the smoke as well. In most instances, there are more than a 100 passengers on board, including children.

Perhaps, smokers could use a nicotine patch to control withdrawal symptoms during long flight journeys, which also helps someone to eventually quit smoking. This way, you could kill two birds with one stone, if that’s what you’re looking for as well.