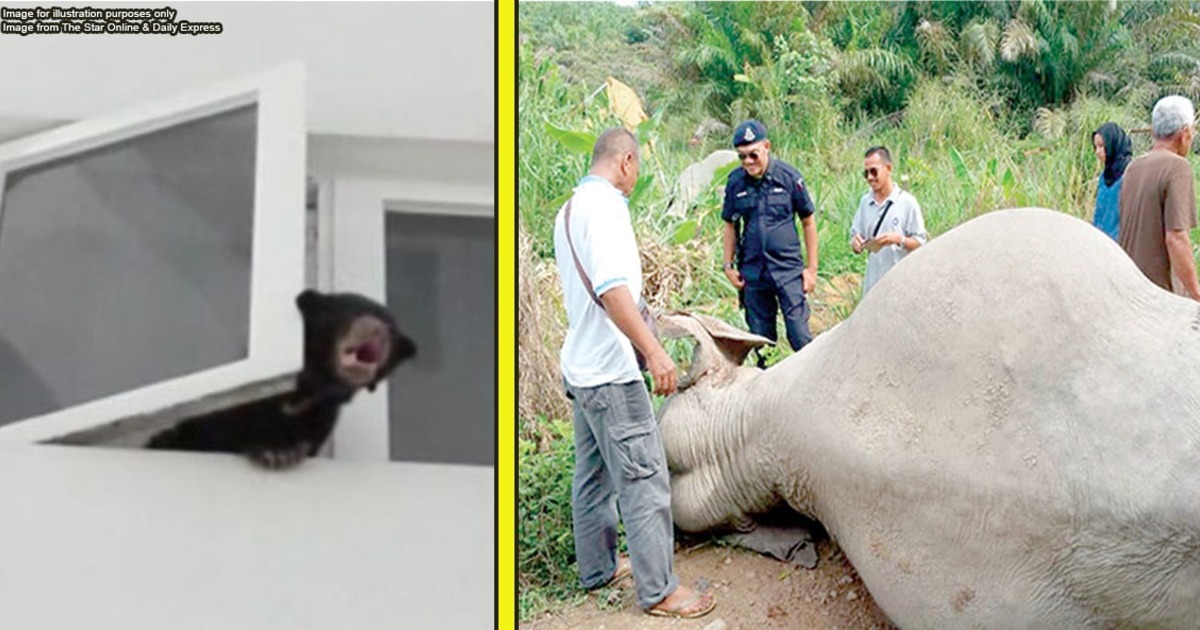 PERHILITAN wants to improve wildlife protection laws, and they want your suggestions!

A few days into June 2019, social media was abuzz with the news of a sun bear that was spotted in a condo in Kuala Lumpur. Rewind a few days before that incident, and you might remember reading the news of three elephants that were poisoned in Johor. Rewind again to a whole month before that, and you might also recall seeing pictures circulating on Facebook of a dead clouded leopard that looked like it had been shot in the head.

Most of us who read these news would have naturally felt very upset and angered. Some of us would have even questioned whether the authorities are doing anything about this and whether our wildlife conservation laws are strict enough.

PERHILITAN, which is the  Department of Wildlife and National Parks in Peninsular Malaysia agrees that those laws AREN’T good enough. And so, they announced that they wanted to amend Malaysia’s wildlife laws, but they didn’t want to do it alone. While they will be incorporating changes suggested by other government agencies and NGOs, they also want to hear ideas from lay people or anyone who has an interest in wildlife conservation.

If you want to give your suggestions right away, click on this link and scroll to the bottom where you’ll see a space for comments. Leave your comments and suggestions there. The deadline is on the 14th of June 2019.

Otherwise, read on to see what limitations PERHILITAN are facing with the current laws, and what they’re hoping to change. There’s a LOT to change, so first thing to do is...

Out with the old, in with the new

The current Wildlife Conservation Act 2010 has 136 sections it in. Out of that, PERHILITAN has said that it will be amending 78 sections and adding 10 new sections to the Act. So, this is definitely a massive revamp. But, why such a drastic change?

PERHILITAN says that currently, the Act has not done much to prevent the extinction of certain species nor has it stopped or significantly reduced illegal wildlife trade. The main objective of the amendments is to bring about laws that can actually do something about these issues before it is really too late. So, parts of the Act that don’t seem to be effective or are redundant will be removed and certain laws that should exist but don’t, will be added into the Act.

Many changes have been suggested in PERHILITAN’s consultation paper, but some were highlighted and reiterated by the department. They mostly involve...

In its recommendations for change, PERHILITAN mentioned that the Act does not stipulate punishments or penalties for many types of illegal activities involving wildlife. Even if the are penalties, they don’t seem to be serving their purpose well. Here are some of them:

1. Unable to arrest offenders without a warrant

Almost all offences in the Wildlife Conservation Act come with a jail term, because they are mostly serious offences (like poaching or hunting). The problem lies in how long the jail term is. If a jail term is only for a year or two, PERHILITAN officers (or the police) are unable to arrest the offender without a warrant. Only if the jail term for that particular offence is for 3 years and more can an officer arrest the offender on the spot.

The majority of the offences in the Act come with only a year or two of jail sentence, and this results in many offenders running scot-free because officers cannot get a warrant to arrest them immediately. PERHILITAN’s suggestion is to increase the jail term for all offences to a minimum of 3 years, so that more offenders can be caught.

For cases like poaching and the selling of wildlife, the current penalties don’t seem to be doing much in preventing people from doing them again. An example given in the consultation paper was of some foreign poachers who had attempted to smuggle elephant tusks and tiger bones. These poachers had been fined RM 250,000 and given a jail tern of 2 years in 2013. Just 4 years later, they had again tried to smuggle elephant tusks and were given an option of paying a fine of RM 100,000 or serving a jail sentence of one year. They were able to evade jail time by paying the fine.

This goes to show that people aren’t afraid to repeat the same offences when it comes to illegal wildlife trade because the laws seem to be pretty lenient. PERHILITAN wants the penalties for serious offences like this to be strict enough that people would not dare to break these laws again and again.

3. Harder to control the spread of disease

This may not apply to animals that live in forests per se, but it’s more for owners of exotic pets. These animals sometimes carry viruses or other diseases with them and it often goes unnoticed till the later stages. These diseases can also spread to other animals and human beings and by that point, it is often much harder to control and cure. At present, there is no law against owners of exotic pets who fail to care for their pets by vaccinating them.

PERHILITAN suggests that there should be a penalty on such careless owners, especially if the public’s safety is a stake.

4. No punishment for those who falsify documents

It must be noted that owning exotic pets in itself isn’t a crime, owning them without a license is. From 2013-2018, PERHILITAN issued 21,369 licences to people who wanted to own exotic pets. But a large number of people have been said to have illegally obtained their licenses or have falsified their permits. This makes it hard for PERHILITAN to go after them because:

In its recommendations, PERHILITAN says that the revamped Act should include a penalty for such people. An example given by them was the International Trade in Endangered Species Act 2008. In this Act, falsifying documents is an offence and the penalty is a fine of one thousand ringgit, a seven year jail term, or both. PERHILITAN says that if this Act has a law against falsifying documents, there’s no reason the Wildlife Conservation Act shouldn’t have one.

No more getting off the hook easily

Another issue faced by PERHILITAN is that they cannot catch everyone in the illegal wildlife trade. The Act makes it an offence to illegally own these animals or to remove them from their habitats sale. There is no mention or any sort of penalty for people who promote or advertise the sale of these animals as these people do not necessarily breed these animals themselves. Because of this, PERHILITAN is unable to do anything about Instagram or Facebook accounts who advertise the sale of these animals. They can only sit back and watch, and that of course, must be extremely frustrating.

These ‘middle men’ are the ones who actually play the most important role, because without them, most people would not know where to buy these animals from. So PERHILITAN is suggesting that a law should be created that would enable them to catch people who advertise the sale of exotic pets. This way, more people in the illegal wildlife trade will be held responsible and it would be harder for the trade to thrive.

Better mediums to reach out for help

PERHILITAN says that a lack of ways to reach them makes it harder to catch poachers or to rescue animals. Currently, the fastest way to reach them is via their hotline, and this alone does not suffice. So, they’ve suggested for social media to be another avenue for people to reach them. They do have Facebook and Twitter accounts, and these should be utilized by public more because:

Here’s how you can help change the Wildlife Act

Now that we’ve seen all that’s wrong with the current Wildlife Conservation Act, we know that something has to be done before it’s too late. As we mentioned earlier, PERHILITAN wants your input and suggestions on how the Act can be further improved. So if you own a pet, or you just love animals on the whole, your ideas will be of much help!

Click on this link and scroll to the bottom where you’ll see a space for comments. Leave your comments and suggestions there. The deadline is on the 14th of June 2019 so if you’re reading this and there’s still time left, head over and do your part!