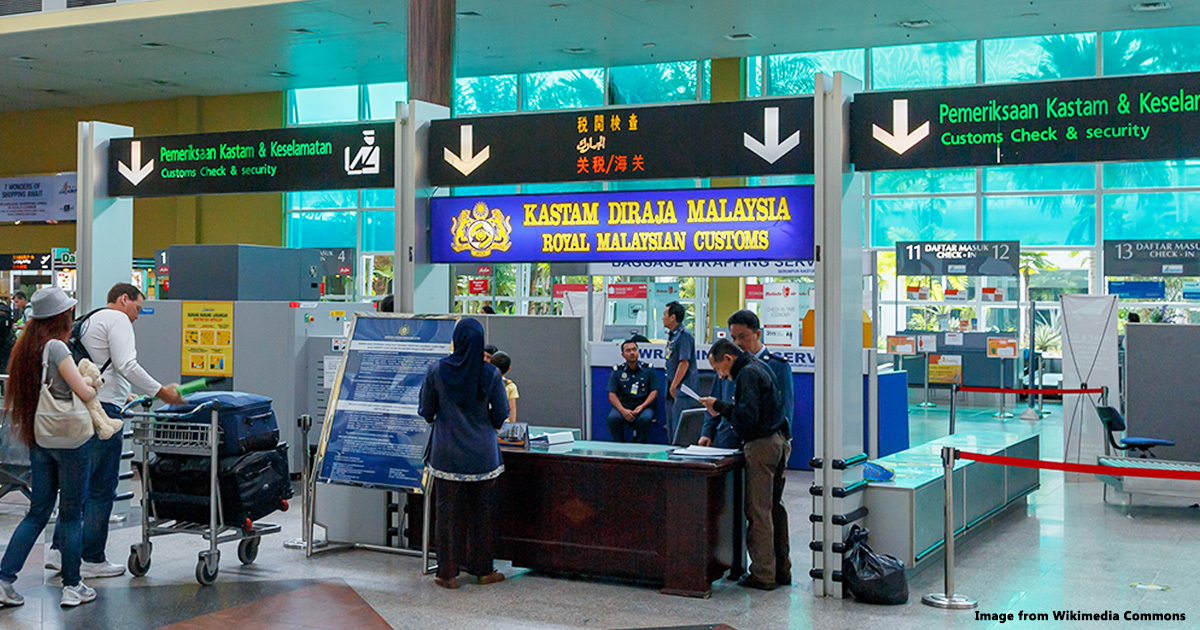 What items are duty-free at Malaysian customs, and what happens if you exceed the limit?

Unless you’re a frequent traveller, you might have come back from a trip with a borderline amount of dutiable goods before (“dutiable” meaning you have to pay customs charges on them). The experience probably involved last minute anxiety at the airport wondering if your items were going to get confiscated, or if you would have to pay a big fine.

This was exactly what this writer faced on his last trip, which is why he’s writing this piece to make sure you don’t have to face the same thing.

You probably know that you must pay a duty charge on overseas products before you can bring them into Malaysia. You also know that some items can be bought duty-free, most notably, alcohol and tobacco. But you might not have known exactly how much is allowed.

Then, there’s also the question of what happens if you’re bringing back too many goods. Do your items actually get confiscated? What charges do you have to pay otherwise?

First, let’s get to the list of items that are duty-free to bring into Malaysia.

Your personal belongings are duty-free

This may come across as absurd and crazy to you, but without an exemption on your personal belongings, you would be liable to pay customs duty on your clothes. This is because anyone who brings in items from outside Malaysia is considered an “importer”.

We usually associate importing with bringing in large containers of goods to be sold for commercial purposes. But according to the legal definition in Section 2 of the Customs Act 1967, “import” means:

“...to bring or cause to be brought into Malaysia by land, sea or air.”

Although you’re technically an importer, you usually don’t pay import taxes because under the Customs Duties (Exemption) Order 2013, every person entering Malaysia is exempted from paying duty on:

If you’re not bringing in any items exceeding the above limits, you don’t have to pay any duty charges. Which brings us to the next question: what happens if you’ve exceeded these duty-free limits?

You just pay customs duty on those items

Contrary to some worries you may have had, your goods will not get confiscated just because you’ve exceeded the exemptions above (assuming you’re not bringing in illegal items like drugs in the first place). All that will happen is that you’ll get charged customs duty on the excess items and amounts.

The exact rate you pay usually depends on the type of item, these rates are specified under the Customs Duties Order 2017. It’s contains lots of tables listing how different types of items are charged different rates in Malaysia. They are pretty long and very specific on how each type of item is charged so we won’t cover them in detail here, but you can find the complete list at the link if you’re interested to know what bringing certain items to Malaysia costs.

But not to worry, you probably don’t have to pay that much because...

Travelling Malaysians (and foreigners) only pay 10%

There’s a specific provision in the Customs Duties Order 2017 for duties payable by civilian travellers (basically as long as you’re not bringing the items in for business purposes):

Paragraph 2(3) of the Customs Duties Order 2017
“In the case of goods subject to import duty imported on or with any person entering Malaysia or in the baggage of such person and is intended for non-commercial use (except motor vehicles, alcoholic beverages, spirits, tobacco and cigarettes) a customs duty at a flat rate of ten percent ad valorem shall be levied on and paid by the importer on such goods.”

There are a few things this provision boils down to:

Let’s say you’re travelling alone (1 person) and you bring in 3 litres of alcohol.

You’re only exempted from customs duty on 1 litre of alcohol.

So you’ll pay duty on the remaining 2 litres of alcohol according to the rate stated in the Customs Duties Order 2017.

That being said, you definitely don’t want to avoid paying the customs duty - it’s a criminal offence.

Trying to avoid paying customs duty on any dutiable items you’re bringing into Malaysia falls under the definition of “smuggling” under Section 135 of the Customs Act 1967, and is a criminal offence. You are better off declaring your goods instead of trying to hide them in hopes of avoiding a bit of duty charges because well, it’s not worth getting fined and going to jail for.

If you need a quick reference for what items are duty-free and what you need to declare when coming back to Malaysia, the Royal Malaysian Customs Department has a brief guideline written here for tourists on Malaysia’s customs rules. These rules are a bit outdated, and states the customs tax at 30%, which is based on the old Customs Duties Order from 2012. This has since been changed to only 10% as we mentioned earlier.