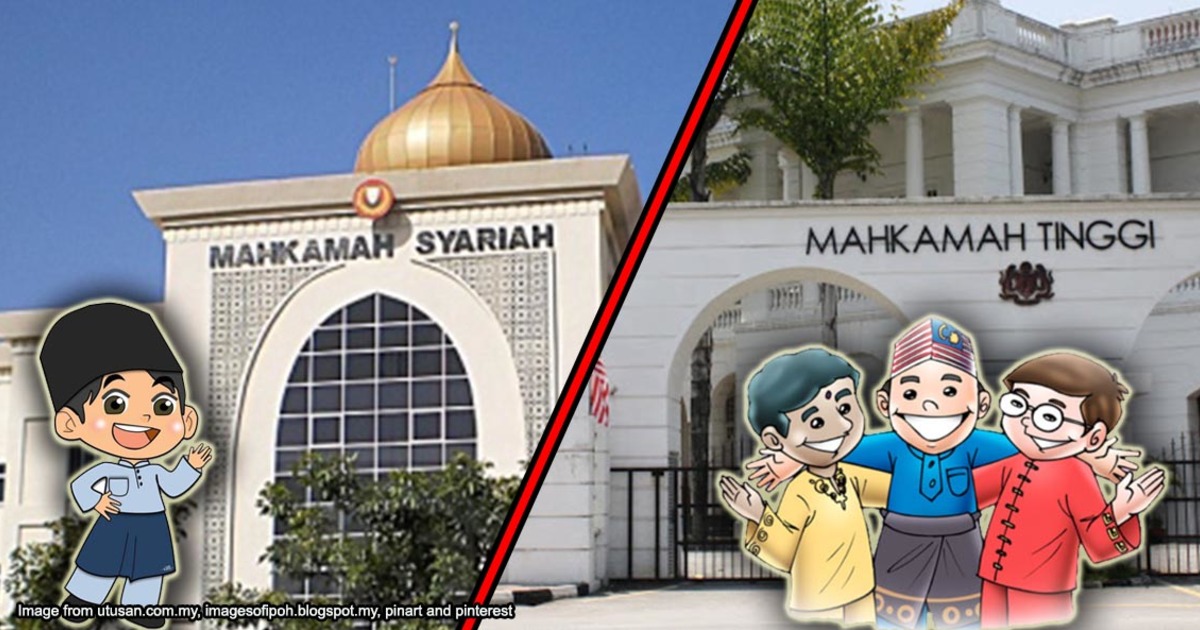 Where do the Syariah courts in Malaysia get their LEGAL power from?

You might have came across the case of Jawi’s raid on Borders back in 2012, or the challenge on the issue of cross-dressing in Negeri Sembilan in 2014, and the most recent example is through Indira Gandhi’s case, the mother who fought to challenge the legality of her children’s conversion to Islam by her ex-husband.

Given all these cases, it’s easy to mistake (and many do) that Malaysia has two court systems; one for Muslims and the other for non-Muslims. The courts in Malaysia are commonly referred to as the civil courts and the Syariah courts. Further to that, many also think that the Syariah courts have the ultimate jurisdiction over all Muslims and Islamic laws.

With these two common conceptions, one common question we get in our comments’ section is – what happens when a non-Muslim and Muslim go to court with each other? So regardless of whether it’s intended to be a troll question or not, we’re gonna answer it.

First, let’s take a look at how Malaysia’s court system works and how they were set up.

The reason why Muslims are given “special courts” and specific areas where Islamic jurisprudence would be applied has a historical basis. Despite the colonisation of the British in Malaya, the British never intended to interfere with the powers of the Malay rulers on matters of religion and Malay custom. This practice of Muslims having their own “courts” stayed on even after independence.

But if we list down Malaysia’s current court system from the lowest to the highest, this is how it would look like:

So…....where is the Syariah court?

The court system (whether civil or criminal) in Malaysia was established by Article 121 of the Federal Constitution. This Article expressly created only 3 courts; which are the High Court, Court of Appeal, and Federal Court. Aside from that, it also empowers federal law to make inferior courts:

This means that any court (which is not the High Court, Court of Appeal, or Federal Court) which is established by any federal or state law is known as an inferior court. This is why the Sessions Court and Magistrates Court which were established by the Subordinate Courts Act 1948 are known as inferior courts and the High Court has the power to supervise these courts.

Now that we understand how the civil court system is like in Malaysia, let’s move on to how the Syariah courts were established and what areas of law they can preside over.

The explanation to this is two-fold:

To break down the long paragraph above, it basically means these 4 points:

Now that where the Syariah court stands in the whole legal system has been established, here’s comes the big question…

What happens when a non-Muslim and a Muslim have a legal tussle?

The most famous example of this would be the conversion cases such as Indira Gandhi’s case, where Indira (a Hindu) married her Hindu husband. Some years into the marriage, her Hindu husband converted into Islam and left their marital home with their youngest daughter, while converting all 3 of their children into Islam without Indira’s knowledge or approval.

On the flip side, if both parties to the case are Muslim but the issue at hand doesn’t fall within the 26 areas relegated to Syariah courts, the matter similarly cannot be brought before the Syariah courts. This is because the Syariah courts inherently have no jurisdiction to hear and decide on matters beyond the provided 26 areas.

To summarise it for you guys, it means 3 things:

Aside from looking at whether it falls within the 26 areas, the moment the issue revolves around an interpretation of the law or constitutional issues, the civil courts “take over” the jurisdiction. This is because Islamic law is only confined to personal matters and not constitutional issues as explained in the case of Che Omar Che Soh v Public Prosecutor. This point was further explained by the Federal Court in Indira Gandhi’s case:

“...if the relief sought by the plaintiff is in the nature of the “inherent powers” of the civil court (for example judicial review) or if it involves constitutional issues or interpretation of the law, then the civil courts will be seised with jurisdiction to determine the issue, regardless of the subject matter and especially if it comes within the scope and ambit of judicial powers as outlined above...” – page 40, Federal Court, Indira Gandhi a/p Mutho v Pengarah Jabatan Agama Islam, Pendaftar Mualaf and Kerajaan Negeri Perak, 29 January 2018 .

The courts referred to in Clause (1) shall have no jurisdiction in respect of any matter within the jurisdiction of the Syariah courts.

If you read it at face value, it can be taken to mean that when an issue falls under the 26 areas, the civil courts (High Court, Court of Appeal, Federal Court) will have no jurisdiction over it. However, the Federal Court (in the Indira Ghandi trial) stated that this was actually the opposite – that Article 121 (1A) was introduced to avoid any conflict between the decisions of the civil courts and Syariah courts. They came to this conclusion based on the judgement of the President of the Court of Appeal in an earlier case (Viran)

“...the approach that Article 121(1A) excludes or oust the jurisdiction of civil courts...is flawed. Article 121(1A) does not constitute a blanket exclusion of the jurisdiction of the civil courts whenever a matter relating to Islamic law arises. The inherent judicial power of civil courts in relation to judicial review and questions of constitutional or statutory interpretation is not and cannot be removed by the insertion of clause (1A)...” – page 57, Federal Court, Indira Gandhi a/p Mutho v Pengarah Jabatan Agama Islam, Pendaftar Mualaf and Kerajaan Negeri Perak, 29 January 2018 .

At the end of the day, this means that…

Malaysia has only one court system

The idea that Syariah courts are one system and the civil courts are another system is a misconception as showed above. Aside from that, the civil courts retain their jurisdiction regardless of the subject matter and especially if the matter relates to a constitutional issue or an interpretation of the law. This is why the cases that involved Islamic law could still be appealed by Muslims and non-Muslims alike to our highest court, the Federal Court. For example, Indira Gandhi’s appeal to the Federal Court, the bin Abdullah appeal to the Federal Court, and so on.

Article 3 still preserves Islam as the religion of Malaysia but as explained by our founding father, Tunku Abdul Rahman and the government of Malaya back in 1957, Malaysia remains a secular state (this means that our government is officially neutral in terms of religion):

“There has been included in the proposed Federation Constitution a declaration that Islam is the religion of the Federation. This will in no way affect the present position of the Federation as a secular State, and every person will have the right to profess and practise his own religion and the right to propagate his religion, though this last right is subject to any restrictions imposed by State law relating to the propagation of any religious doctrine or belief among persons professing the Muslim religion.” – White Paper, Federation of Malaya, 1957 as quoted from The Making of the Malayan Constitution [emphasis added]