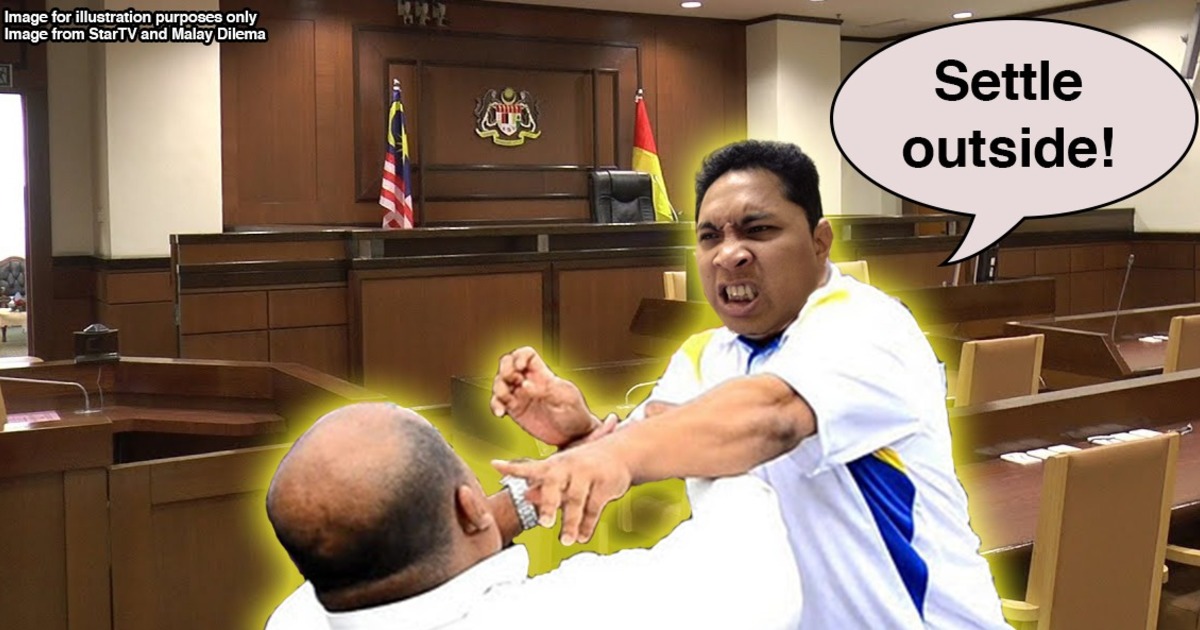 In Malaysia, can you settle your lawsuit by having a trial by combat?

In court, we expect things to be handled with words and wits, two parties pitting their intellect against each other. But what if instead of words, they decide to let their fists do the talking?

Believe it or not, this scenario isn’t completely unheard of. Fighting to settle a dispute, or trial by combat, used to be a very real thing a few hundred years ago. Both parties will have a one time duel, and they will either fight themselves or nominate a champion to fight for their behalf.

The last recorded case was from 1818 in the United Kingdom, in the case of Ashford vs Thornton. Thornton was accused of murder, and he decided to challenge his accuser to a trial by battle to settle it. It wasn’t a very bloody fight – his accuser didn’t show up, so Thornton won by default. However, the law was immediately buried next year, when the British parliament abolished it.

But early this year, a man from the US attempted to resurrect the tradition — he challenged his wife to a trial by combat to settle their divorce dispute, but allowing her to nominate a champion in her place. The judge for the case has not decided whether to allow the proposal or not.

So, is this actually allowed in Malaysia or do our laws say otherwise on settling things with your fists, and other pointy objects?

We decided to nominate a champion ask a lawyer, Fahri Azzat, on whether this is a legit option to settle legal disputes in Malaysia.

No. In fact, fighting is an offence unless it is a recognised sport like boxing or UFC. – Fahri Azzat, lawyer, answering through an email interview with ASKLEGAL.

Sadly, a trial by combat isn’t an option (yet) in Malaysia. And the act of fighting by itself is a crime here. If two guys fight in a public place, then they are committing the offence of affray under Section 159 and Section 160 of the Penal Code. This is punishable with imprisonment of up to 6 months, or fine of RM1,000, or both.

If you thought the punishment for fighting is heavy, bringing a weapon to a fist fight can land you in even more trouble than usual. This is because we aren’t allowed to carry weapons in a public area. Weapons are prohibited under the Corrosive and Explosive Substance and Offensive Weapons Act 1958. Under Section 6 of the Act:

(1) Any person who in any public road or place carries or has in his possession...any offensive weapon otherwise than with lawful authority or for a lawful purpose shall be guilty of an offence

There are only three reasons you’re allowed to carry a weapon in public: if you’re a policeman, a member of the armed forces, or you’re wearing it as part of a ceremonial dress. If you’re found carrying one without a good reason, you can be jailed between 5-10 years.

And the definition of what is considered an ‘offensive weapon’ is really wide. According to Fahri:

It is defined as including any instrument which if used as a weapon of offences is likely to cause hurt. That can potentially include anything, even a sharpened pencil, theoretically. – Fahri

But what if both parties agree to carry it on, anyway? Would it be accepted if it’s part of their contract?

[READ MORE: Can you legally carry weapons for self-defence in Malaysia?]

Even if both parties agree, it’s still illegal

What if both parties decide to solve their issue through a fight anyway? Say, they made a contract and said that they both have agreed to it, and the victor will win the case. Wouldn’t that just be similar to a sporting arrangement?

Not so, according to Fahri.

If they insist on battling out then I think any agreement they enter into agreeing to fight as a means of dispute resolution is potentially liable to be invalidated as being against public policy under the Contracts Act 1950, specifically under section 24(e). – Fahri

Even worse, if you still decide to carry out the fight, AND someone gets killed, you can be charged, even IF they agreed in the contract that death is an acceptable outcome.

But don’t worry. If you’re inclined to settle matters outside court, you still have other options.

If it’s not violent, then it’s okay

But just because you can’t fight things out, it doesn’t mean you can’t settle things through a competition. According to Fahri:

Well, there are certainly other ways - arbitration or mediation aside from a civil suit in court. But there's no violence in that is there? If the gentlemen want to resolve it by winning a (competition) then they should enter into a contract to preserve that in an agreement. – Fahri

So you can have a competition of sorts to decide your issue, as long as it’s not violent.

[READ MORE: 5 ways to "sue" someone in Malaysia without going to court]

But it’s fun to imagine a world where trials by combat is an option, especially if your lawyer can fight on your behalf. We asked Fahri what he thought it would look like, and here’s what he had to say.

Except for a small band of very fit and healthy lawyers, I think many would immediately suffer because of lack of exercise, fitness and health. I imagine a great number of lawyers would be hurt and even suffer death or a fate worse than that. The medical business will certainly have a field day. Doctors will begin to love the legal profession and lawyers more. The fit and healthy lawyers skilled in martial arts or weaponry would dominate and earn loads of money.

The skill of a lawyer will not lie in his mouth or mind anymore but in their hardened, muscled and skillful bodies which look aesthetically pleasing in promotional materials. – Fahri