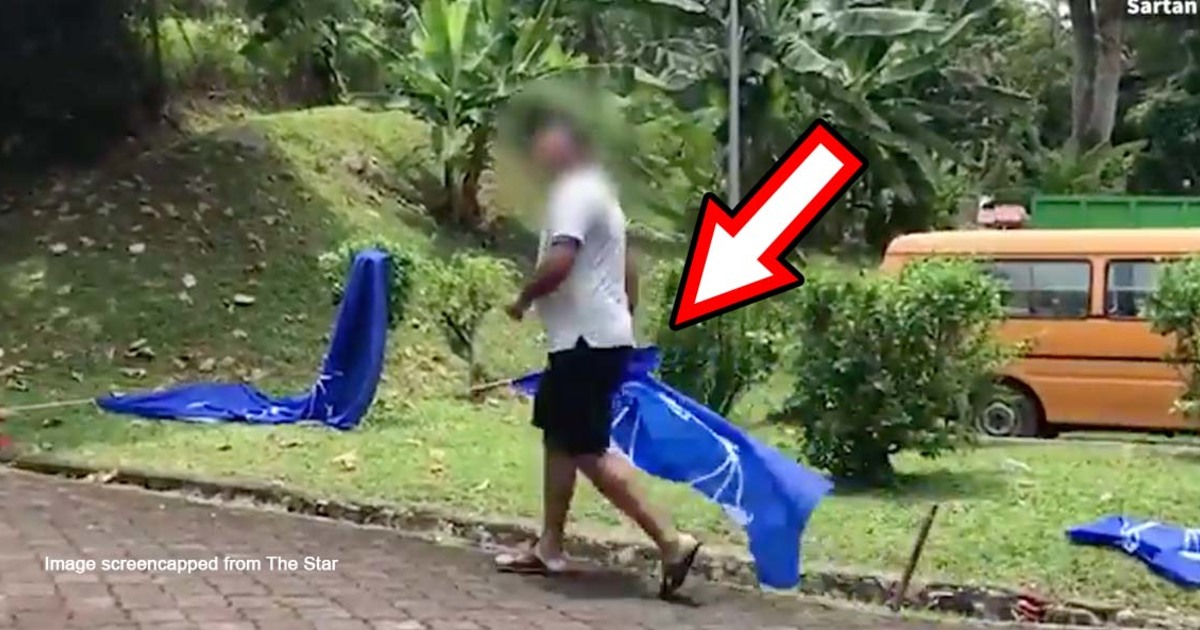 When can political parties legally put up flags for GE14... and can you remove them?

On one hand, they easily draw our attention to the fact that elections are around the corner, and show us how determined our local politicians are to win what is arguably the most anticipated political event in Malaysia. To a certain degree, one might even say that it lends an air of festivity, especially when people get creative by fashioning marriage chairs, tanks, or even ships.

On the other hand, they can be terrifying nuisances, particularly when there are just too many of them in one place – sometimes obstructing traffic, creating litter, and presenting a general safety hazard. For example, Tenaga Nasional has issued a reminder to all political parties to not put up any banners on their premises or electrical installations due to risk of electrocution and fire.

This might perhaps cause you to wonder if there are laws which govern the placement of election flags or, more likely, whether we can get in trouble for removing the flags if they become an obstruction or simply because we don’t like the party? The answer to this can be a little tricky, as we must first know that...

Parties are given a specific time frame to promote themselves

Political parties and their candidates are only allowed to start convincing you that they’re the best leaders for the country during what’s called a campaigning period –  a specified time frame announced by the Election Commission (EC). For GE14, the campaigning period will last 11 days from April 28th to May 8th .

Once the election campaigning period begins, the EC governs how parties conduct their campaigns across the country, including the placement of election flags as they are regarded as campaign materials.

Certain sections of the law also “come into effect”, such as Section 24B(4) of the Election Offences Act 1954 which states that these flags can only be placed by nominated election candidates (or their agents) who have been given explicit permission to do so by the State Elections Director.

They can also only be placed within the constituency that the candidate is contesting in, which means that if a candidate is contesting in the Gombak constituency, for instance, he or she cannot place flags in Lembah Pantai. Not just that, they’ll also have to pay a specified deposit to the State Elections Director to ensure that no rules are broken, and that they’ll be cleaned up after the election. More on this later.

Section 24B(4) of the Election Offences Act 1954 – Election campaign and limitation thereof (In part, emphasis added):

Those who place election flags without the required permit can be charged with a maximum fine of RM3000 or one year of imprisonment, if not both, for breaching this law.

So, if parties are only allowed to put up flags during a specified period, you might be wondering why you’ve been seeing them in certain areas even before that. Well…

Very quickly, local authorities such as state governments or municipal councils (majlis perbandaran) have the power to enact by-laws, which are regulations that are only enforceable within their jurisdiction. To this effect, candidates or parties will also require their permission before putting up any campaign materials. Election flags may, for example, be subject to by-laws on advertising or vandalism if placed before the campaign period and can be taken down by the council, with those responsible being charged under these by-laws – similar to unauthorized ah long ads.

Because the EC only has the authority to act during the campaign period, it’ll be up to the local authorities to govern whether or not party flags can be put up before the period, and to punish those who violate the rules.

“We want to make this clear. The commission has no authority to take action against any parties, ordering them to take down or remove the campaign materials like posters or flags because the election process has not started. The EC can only act during the official election campaign period as stipulated under the Election Offences Act 1954.” – EC chairman Tan Sri Mohd Hashim Abdullah, as quoted by New Straits Times.

As an example, the Kelantan State Government has asked parties to take down flags which have been strung up along major roads, while Putrajaya has allowed them on a discretionary basis. What this means is that while putting up flags actually violate Putrajaya Corporation’s by-laws, they decided to allow it as long as the flags don’t pose a danger to the public or obstruct traffic as “everyone is already in election mode”.

So will you get in trouble if you take down party flags?

This is where it gets a little complicated. If you were caught removing them during the campaign period, there is a chance that your action could be seen as hostile against a party or candidate or attempting to sway people from voting for them.

Section 4A(1) of the Election Offences Act 1954 – Offence of promoting feelings of ill-will or hostility (In part):

Any person who, before, during or after an election, … does any act or makes any statement with a view or with a tendency to promote feelings of ill-will, discontent or hostility between … the population of Malaysia in order to induce any elector or voter to vote or refrain from voting at an election or to procure or endeavour to procure the election of any person …

Running afoul of this can get you sentenced up to five years of imprisonment and/or a fine of up to RM10000, along with your ability to vote revoked for five years from the date of conviction. If you have political aspirations, you won’t be allowed to run for election as a candidate in that period too.

However, it’s arguable whether or not removing flags before the campaign period is an offence, since they’re not technically supposed to be up in the first place. There have been a couple of instances where members of the public were either arrested or investigated for removing party flags, such as 3 women who were detained by the police for cutting down BN flags in Taman Tun; or the investigation into the video of a man pulling down flags in the Bukit Bintang area. Both incidents were investigated under Section 427 of the Penal Code:

Section 427 of the Penal Code – Committing mischief and thereby causing damage to the amount of twenty-five ringgit :

“Whoever commits mischief and thereby causes loss or damage to the amount of twenty-five ringgit or upwards, shall be punished with imprisonment for a term * of not less than one year and not more than five years or with fine or with both.”

This has been highlighted by Maria Chin Abdullah, who said that there was no reason for the 3 women to be arrested, and that action should be taken against those who put up the flags in the first place.

But laws aside, taking down a flag on your own may not be the safest idea because it can lead to violent confrontation, such as a youth who was beaten unconscious by four men who caught him removing a flag during GE13. Even the authorities aren’t spared, with a recent attack on Kota Baru Municipal Council staff attempting to remove flags which were hung without a permit.

It’s best to make a complaint

Rather than taking banners into your own hands, you can make a complaint to your local council and/or the EC (during the campaign period) if you find the banners obtrusive, hazardous, or objectionable, though we should note that not supporting the party will likely not fall into those criteria.

However, if you really love the party or are looking to build a collection of party flags, you may just want to get in touch with them to see if they have spares lying around, or simply wait till the post-election cleanup. Parties (or their agents) must remove all campaign materials within 14 days after the elections.

Section 24B(8) of the Election Offences Act 1954 – Election campaign and limitation thereof (In part):

This translates to say that no flags should be left hanging in any constituency two weeks after the election, and it’d be alright for you to take one home – as long as you don’t make a mess.