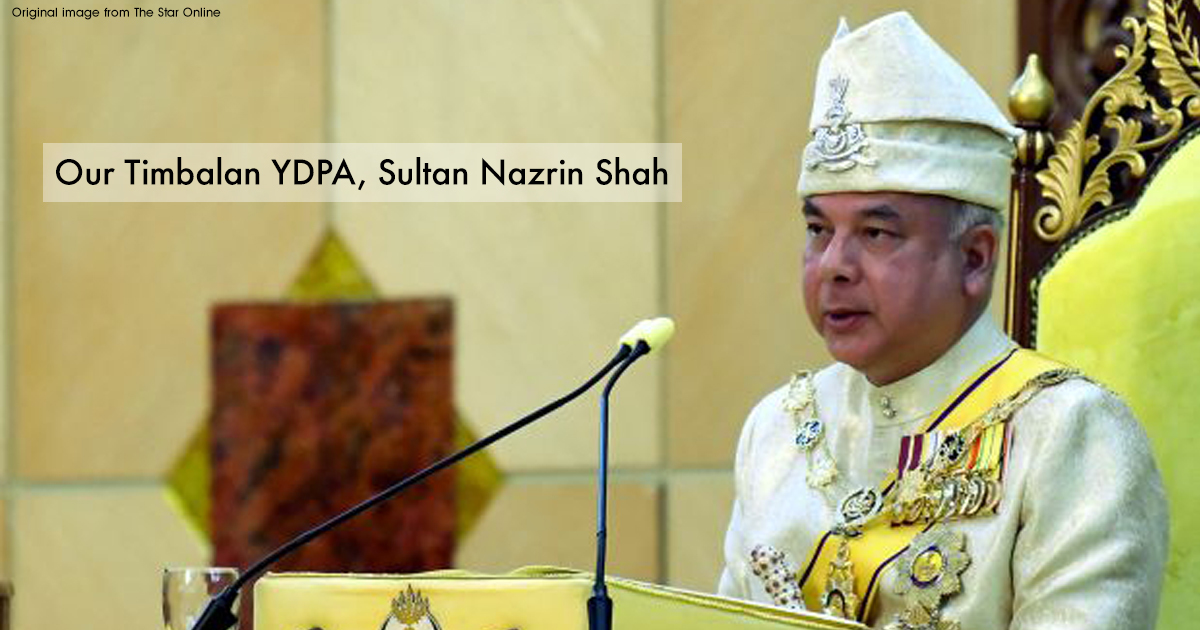 Wait what, Malaysia has a Deputy Yang di-Pertuan Agong?

On 2 November 2018, it was announced that the Sultan of Perak, Sultan Nazrin Shah, would take over the functions of the Yang di-Pertuan Agong (YDPA) from 2 November until 31 December. It isn’t exactly the end of Sultan Muhammad V’s term yet, so why exactly does Sultan Nazrin Shah need to step in as YDPA?

He’s the Timbalan Yang di-Pertuan Agong, and is filling in since the Comptroller of the Royal Household for Istana Negara officially announced that Sultan Muhammad V would be resting following medical treatment.

It’s not everyday that you see the “Deputy Agong” fill in for the YDPA, so many Malaysians were quite surprised to learn that there was such a role at all. The position of Timbalan Yang di-Pertuan Agong is actually written into Article 33 of our Federal Constitution, which, while important, is unknown to most Malaysians. Here’s a brief rundown of the Timbalan YDPA’s functions.

The Timbalan Agong fills in when the YDPA “goes on leave”

Also called the Deputy Supreme Head of the Federation, the Timbalan Yang di-Pertuan Agong enjoys the privileges and performs the functions of the Yang di-Pertuan Agong when he is “away from office”. This basically refers to any situation where the YDPA is ill, is away from Malaysia, or for any other reason cannot fulfill his official role. Kind of like any office position where you have a deputy role filling in for the head role when they’re not available.

A key limitation here would be that the Timbalan YDPA is not supposed fill in if the actual Agong will be away for less than 15 days, unless it is necessary for the Timbalan to do so (like if there is an urgent matter that needs tending to). When acting for the YDPA, the Timbalan is also subject to the limitations of power upon the YDPA (called “disabilities” in the Constitution), such as that the YDPA is not allowed to engage in commercial enterprise.

How is the Timbalan selected?

Just like the YDPA himself, the Timbalan Agong is also elected by the Conference of Rulers (Majlis Raja-Raja), which is basically a council of our Sultans where they decide on certain official matters like religious matters, consenting to Parliament’s laws, granting royal pardons, and even discussing certain national policies like immigration policy.

And, like the YDPA, the Timbalan also holds his position for a term of 5 years, but if he is elected during the term of a YDPA’s rule, he will only be Timbalan for the remainder of that time. So if Sultan ABC was made Timbalan while the YDPA is in the final year of his term, Sultan ABC’s time as Timbalan will only last for another year.

But he’s not next-in-line

One other rule is that if the YDPA’s office is emptied for any reason, the Timbalan does not automatically become the YDPA, unlike the way the Deputy Prime Minister or a Vice President takes over if their principal is away. Article 33(3) of the Constitution states that:

Which means that if the current YDPA leaves his position, the Timbalan loses his position as well. The election process by the Conference of Rulers takes place where a new YDPA and Timbalan YDPA will be chosen instead.