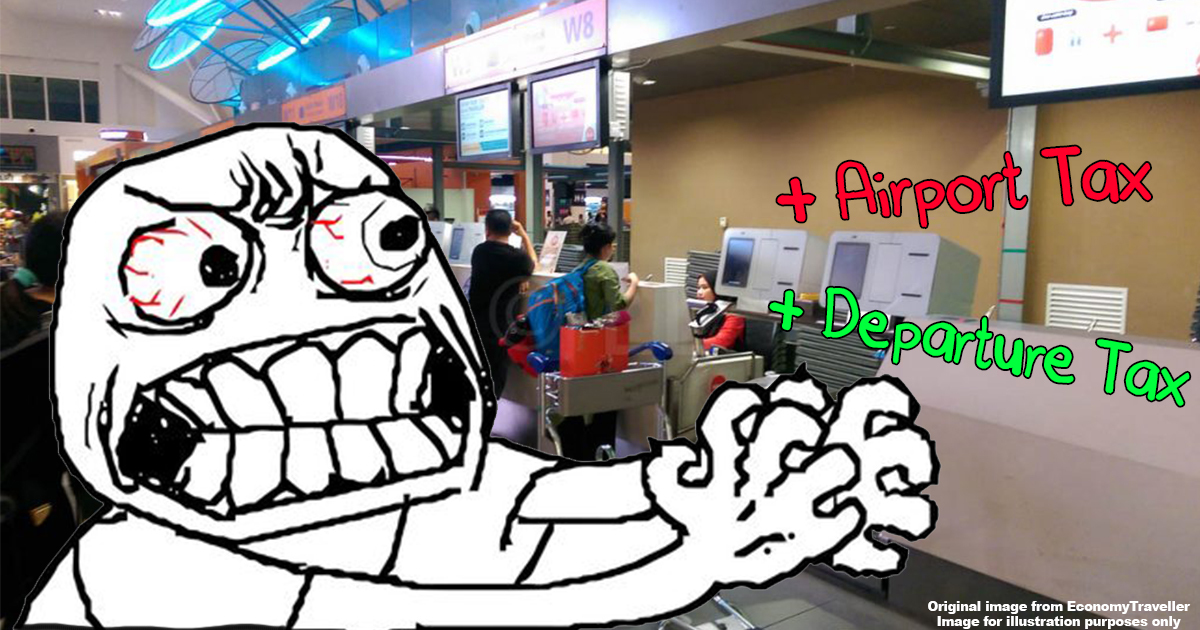 Why are Malaysians getting charged both airport tax and departure tax in 2019?

If you remember Budget 2019, you know that there were a lot of benefits and tax changes in there. One of the things announced for this year included a new type of tax - departure tax which is to be paid at airports before embarking on a flight.

While we all know that the government needs money to fund itself and run projects, some of us remember that we already have an airport tax which we pay for when buying flight tickets. So you might be thinking… Isn’t it a bit much for the government to tax the same thing twice?!

Airport “tax” is not collected by the government

It’s covered in a piece of regulation called the Malaysian Aviation Commission (Aviation Services Charges) Regulations 2016, which is a “sub-law” under the Malaysian Aviation Commission Act 2015 (MAVCOM Act). MAVCOM (the government body in charge) announced a small change in the charges on their website in November 2017, which is accurate at the time of writing, but future changes are announced through the Federal Gazette.

In essence, the PSC is broken into two parts:

These charges are different for domestic flights, flights within the ASEAN region, as well as international flights outside of ASEAN. But, they are standard across all airports in Malaysia as well, which Tan Sri Tony Fernandes has taken dispute to...

AirAsia refuses to collect the full PSC charge for MAHB

You may already recognise the term “Passenger Service Charge” from the news because of a longstanding feud between AirAsia and MAHB about how much PSC should be collected. AirAsia’s position is that klia2 has vastly different facilities from KLIA, and so their PSCs should be different as well. They’ve been refusing to collect the full PSC charge of RM73 on international flights at klia2, and instead collect the original RM50 which they consider fair to customers.

Technically speaking, AirAsia is not doing anything outright “illegal” to collect a smaller sum because according to the Malaysian Aviation Commision (Aviation Services Charges) Regulations 2016, it’s MAHB’s responsibility to collect the fare. But AirAsia could face penalties under the MAVCOM Act as what they are doing can be seen as anti-competition. MAHB is now suing AirAsia for the full PSC payment, which we’ll have to wait and see how that goes.

That being covered, what about the new “departure tax” announced in Budget 2019?

Departure tax is paid to the government

Transport Minister Anthony Loke has explained that the upcoming departure tax is separate from the PSC. The main reasons for the tax are stated as to encourage domestic travel, and raise money for the government.

The departure tax will apply to all travellers leaving Malaysia, standing at a proposed RM20 to ASEAN countries, and RM40 to non-ASEAN countries. It has not yet been implemented, and will only take effect from 1 June 2019

But wait, part of what MAHB earns from the PSC also goes to the government

While we can think of the PSC as a service charge imposed by the airport management, as with most things in life, it’s not as straightforward. According to this news report, the acting CEO of MAHB, Raja Azmi Raja Nazuddin, had stated that about 11.8% of MAHB’s earnings are paid to the government as part of its user fee. So the PSC actually benefits the government as well, albeit it’s through taking a percentage from MAHB.

As for the longstanding dispute between AirAsia and MAHB, we’ll have to see how the lawsuit turns out, and whether the government will decide to to resolve the issue through intervention, by amending the Aviation Service Charges.