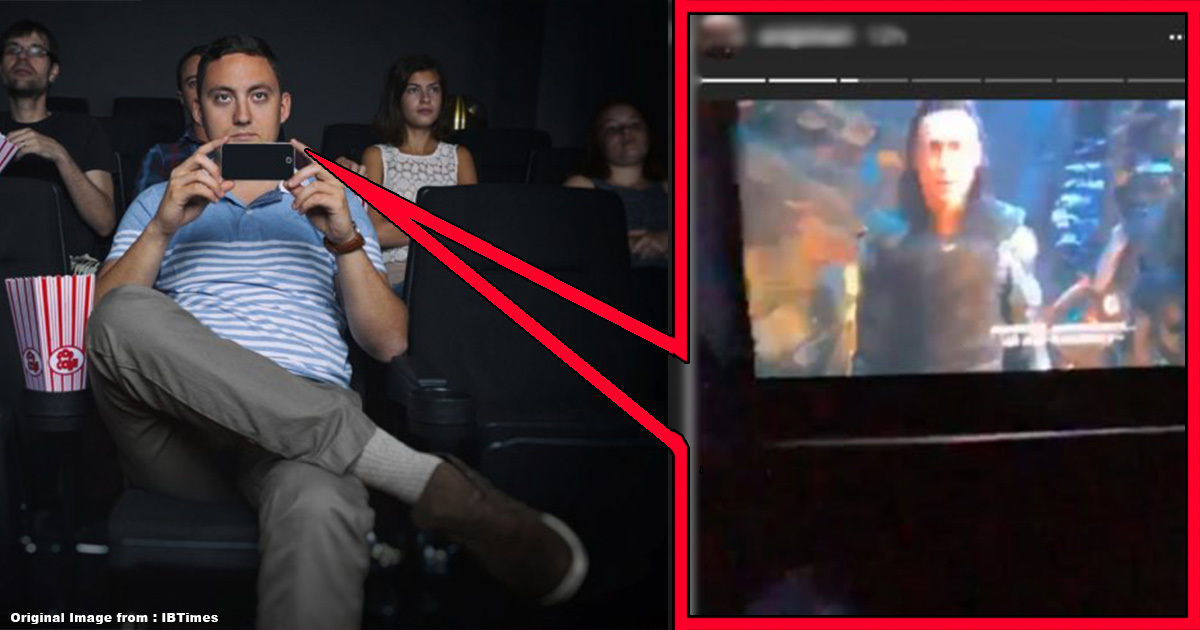 Can you get in trouble for Instagramming the new Avengers movie in Malaysian cinemas?

If you were born before streaming services like Netflix became main-stream (pun intended), you probably remember the times you could find pirated DVDs of movies being sold on the street. The DVDs would come really cheap, but were very questionable in their quality. Assuming you find the correct movie on the DVD at all, the camera would be shaking, you hear the sounds of the audience coughing and laughing, and you’ll even see the shadows of latecomers walking across the screen.

Clearly, this movie was recorded in the cinema. We generally accept that recording the entire movie is illegal since the cinema usually puts up an awareness advertisement before their movies, stating that recording movies is illegal and is a copyright offence. Ironically, this is sometimes illegally recorded as well

But what about taking a 10 second clip for an Instagram Story, or taking a few pictures for a social media post? This was an issue Malaysian cinemas faced upon the release of Avengers: Infinity War, a lot of Malaysians were taking videos and pictures of the movies even after being told not to by the cinema staff. But that’s not copying the entire movie so it’s okay, right?

To understand the issue, let’s start with why it’s illegal to record movies in the first place.

Movies are protected by copyright

According to Malaysian Copyright Law, moviemakers have certain rights that are protected under Section 13 of the Copyright Act 1987, for a period of 50 years from the year after publication.

Section 22 - Copyright Act 1987
“Copyright which subsists in a film under this Act shall continue to subsist until the expiry of a period of fifty years computed from the beginning of the calendar year next following the year in which the film was first published.”

The rights protected include the right to publish the work to the public, and to reproduce the work in any material form.

[READ MORE - How do you get your work copyrighted?]

If anyone wishes to use the work, it must come under one of the exceptions in Section 13. The exceptions allowed by law generally cover situations where the work is used for education, criticism, news reporting, and parody (you can find the full list in Section 13(2) of the Copyright Act). Contrary to popular belief, it’s not just how much you copied that matters, but the reason you copied as well.

So, recording even a small part of a movie can be a copyright infringement if it was done for the wrong reasons. Since making a social media post just to show snippets of a movie does not fall within any of the legal exceptions, it may be considered illegal.

But, some pictures and recordings might be considered “fair dealing” in copyright law

To be able to use a part of someone’s copyrighted work, you can also make sure that your usage is compatible with “fair dealing” provisions in Section 13(2A):

Let’s use the example of putting snippets of a movie up on social media again. Most people don’t make money off such posts, the amount copied is really small (only 10 seconds or just a few pictures), and a social media post can’t exactly steal sales away from the original movie. Seems like a fair use of the original material right?

In theory, it works out. But nobody really knows how the law will apply in practice until an actual case goes to court. As long as you’re not making a long recording for Facebook Live or to publish it in another way, you’re probably not going to get in trouble with the producers of the film.

However, copyright laws are only one part of the equation. You might be fine including a clip of the Avengers movie in a film case study, but it’s still best you don’t do any recording in a cinema because...

It’s a crime to record movies in a cinema

Unfortunately, Instagram enthusiasts should probably hold back on posting an Instagram Story of their cinema experience because it is a criminal offence to record a movie in cinemas, whether it’s 10 seconds or 2 hours. As per Section 43a of the Copyright Act:

“Any person who operates an audiovisual recording device in a screening room to record any film in whole or in part shall be guilty of an offence and shall on conviction be liable to a fine of not less than ten thousand ringgit and not more than one hundred thousand ringgit or to imprisonment for a term not exceeding five years or to both.” – emphasis added

Attempts to record a movie are also punishable with a fine of between RM5,000 to RM50,000, and/or imprisonment for up to 1 year. And since you might ask, “audiovisual recording device” in this law means:

“...any device which is capable of recording or transmitting a motion picture or any part thereof”

So yes, that includes your phone camera.

Furthermore, cinemas usually have house rules for their patrons to follow, which usually include rules like “no outside food and drinks”, and “no recording allowed”. These house rules are like conditions you have to follow to get permission to enter the cinema. If you break those rules, you no longer have permission to be there.

Cinemas may from time to time arrange for their staff to monitor their halls, and if someone is caught trying to record a movie, the staff have every right to throw them out.

So don’t record movies to show on social media

It’s always exciting to finally go watch a long awaited movie. And in all that excitement, it’s also natural to want to share your cinema experience with your friends on social media. Go ahead and take those pictures outside the cinema halls, like with your popcorn, or the movie posters and pop-up props...however you like to make your social media posts.

Just keep those lenses away from the cinema screen.