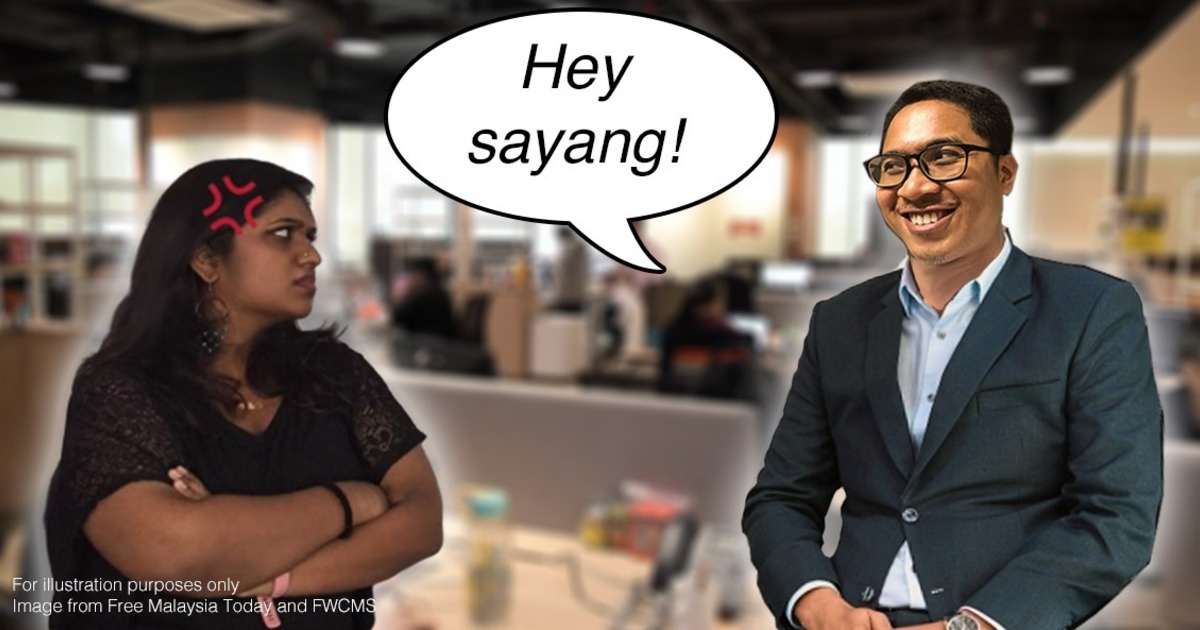 A Msian boss was fired for calling his secretary sayang...All. The. Time.

Can calling your coworker sayang actually get you fired? Some of us might use it jokingly in the workplace, especially the office’s resident casanova. And everyone might just laugh it off, because...it’s a joke. Right?

However, if the target of endearment does not want it, and you keep on doing it, guess what? It might actually fall under sexual harassment. Because as we’ll find out in this court case, sexual harassment isn’t just limited to being touchy feely.

He called her sayang...A LOT

This case happened between a boss and secretary. But let’s start with the boss first. Logan was a Construction Superintendent, who worked for Murphy Sarawak Oil. He was with the company for four years. When his contract was renewed on 2 February 2015, he was assigned to his company’s contractor, Brooke Dockyard, in Kuching.

There, he was assigned a secretary, RR* (name hidden for privacy purposes). It didn’t take long for him to start getting overly comfortable. In the first few weeks itself, Logan was already calling RR sayang, despite her telling him to stop calling her that. He also used it in text messages between them, in addition to sending good morning messages, sometimes including inappropriate quotes or images. In two WhatsApp messages on 12 February, he said:

“Thank you sayang. Have a safe drive. I’m waiting to see my sayang’s smiling face.” – Logan

This wasn’t only done in private conversations. During a progress meeting in early March with other employees, he announced that RR, who was sitting next to him, was his sayang. RR was upset and uncomfortable with this, as the other employees started teasing her for it. It didn’t help matters when in another meeting later that month, he told the other employees not to disturb RR, because if they did he would be angry and jealous.

And it started to escalate from there because…

He did more than call her sayang

In February, Logan also started getting more touchy. Before going to a First Steel Cutting ceremony, Logan asked to take a picture with RR. While posing for the picture, he placed his hand around her. When she tried to move away, he brushed it off by claiming that his previous secretary always liked to hug.

He also insisted that they ‘salam’ every morning. But it wasn’t a professional greeting, because Logan would keep hold of her hand for an uncomfortably long time. Once, he even commented that her hands were rough, and he would buy her lotion to make it soft.

Logan was also becoming excessively generous for a boss, especially one that’s new. He bought RR gifts such as perfume and hand lotion (to make her hands soft) which she had refused when Logan first brought it up, and refused again when he gifted them to her. The perfume was given when Logan insisted that she pick him up from an airport, instead of a driver. When she turned it down, he just kept it on her dashboard. The gifts also started to seem romantic, when he gifted her flowers on Valentine’s Day.

Later in March, the company had a team building dinner. Before going there, he told RR to follow him clothes shopping. But the clothes weren’t just for him—he wanted to buy RR a new dress for the dinner, as he wanted her to be the prettiest one there. She tried to turn him down, but Logan pulled rank, and told her that he was her boss—so she should follow his orders.

If you’re a sharp reader (which we know you are!), you’d notice that these events happened only between February and March 2015. And there’s a reason why it’s so short: because two months was how long RR lasted before she couldn’t take it anymore.

On 30th March, they had their team building dinner at Damai Beach Resort. Logan couldn’t find his hotel room, and when he did find it, it wasn’t a room that he wanted. Angry, he called RR and scolded her through the phone. He then told her to meet him at the hotel lobby. There, he continued the tirade, saying that RR treated him like a dog in front of the contractors.

This was the last straw for RR. The next day, she left the team building meeting abruptly. The day after that she resigned via text message to Logan. She only sent her official resignation letter to her company a week after that. She told them that she was unable to submit it earlier, as she was traumatised from the sexual harassment. When asked why she didn’t make a complaint earlier, RR said that because Logan was her superior, she was afraid that she would either lose her job, or Logan would ask her to resign.

They only proved one...but that was all they needed

At the DI proceeding, Logan was charged with four counts of sexual harassment. They were:

According to the DI’s panel, these inappropriate acts have made RR “uncomfortable, upset, stressed, heavy hearted, scared to work and afraid of what (Logan) would do next.”

However, the company did not find him guilty of all four. They decided that the first charge – calling his secretary sayang – was sufficient to prove that he was sexually harassing her. This is because in their company code, there was a line that stated:

“...there are certain behaviours that the company will not tolerate. These include unwelcome sexual advances or other inappropriate personal conduct.” – excerpt from Murphy Oil’s Code of Conduct

Because of their zero-tolerance policy, he was dismissed two months later. Obviously, Logan was not happy with it and brought his employer to the Industrial Court, claiming that he was unfairly dismissed.

They had 40 pages of evidence of him using sayang

At the Industrial Court, in the case of Loganathan Maniam v. Murphy Sarawak Oil Co Ltd [2020] 2 ILR 275, Logan claimed that he was unfairly dismissed, and that he did not get natural justice (basically a fair trial) during the DI proceedings.

To see whether he really was unfairly dismissed, the court had to look into two things:

Strangely enough, when questioned he did not deny calling RR sayang. Rather, he said that he only called her sayang 3-4 times, and that he had innocent intentions: he only thought of her as a daughter. And when he did call her sayang, he did so with her permission.

Embarrassingly, this was disproved when the court said they had nearly 40 pages of documents containing their WhatsApp conversation. It showed that Logan called her sayang in nearly every single message. This is in addition to eyewitness accounts confirming that he did so publicly.

The court also said that in Malay, the word ‘sayang’ is a term of endearment, which signifies intimacy beyond a friendship. As a man, as well as RR’s superior, his actions were unacceptable. Not only that, RR herself had said she felt uncomfortable with him calling her sayang, saying that it embarrassed her.

As for the gifts, Logan denies having any wrong intentions in giving the gifts. However, the court finds that giving a subordinate personal items such as perfume and flowers as unacceptable. The court also decided that the company has sufficiently proved that he had physically harassed her, as well as abused his position.

His misconduct of sexually harassing his secretary, RR, was also serious enough for a dismissal. Therefore, the company did nothing wrong in firing him. Logan will not get his job back.

any unwanted conduct of a sexual nature, whether verbal, non-verbal, visual, gestural or physical, directed at a person which is offensive or humiliating or is a threat to his well-being, arising out of and in the course of his employment;

We might overlook verbal harassment, or even gift-giving as something innocent. However, as this case proves, if the loving words and thoughtful gifts are unwanted, and in this case repeated, then yes, it can be sexual harassment.

So if you do feel you’re harassed at work, don’t hesitate to report it to your HR. We’ve written before on how to do so, in case you’re unsure of what to do next besides contacting HR.

[READ MORE: What can you do if you have been sexually harassed in Malaysia? ]